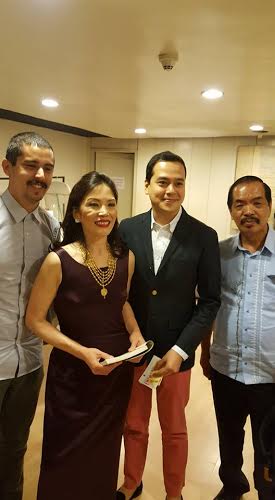 TRUST Nedy Tantoco of the Rustan’s Group of Companies to come up with a fool-proof fund-raising idea.

Noting the popularity of the grand Tchaikovsky Piano Concerto No. 1 in B Flat Minor and the often-hummed Rachmaninoff Piano Concerto No. 2 in C Minor, Tantoco presented pianist Cecile Licad and the Philippine Philharmonic Orchestra (PPO) in an evening of twin concertos to raise funds for the foreign tour of the national orchestra.

The concert surpassed everybody’s expectations as the theater was full. Everybody who counted (and those who didn’t) were there. What was heartwarming was that the young musicians came in full force.

Opening with Rossini’s Overture to “Italian in Algiers,” the PPO under Olivier Ochanine was a highly energized orchestra Thursday night.

As for Licad, she didn’t rely on the concerto’s popularity to make it work. It looked as though she overhauled the entire concerto and gave it a new look and a new sound.

Indeed, the two concertos were a grand introduction for the Hamburg Steinway grand that came all the way from New York.

By the time the audiences were all agog over the allegro vivace fireworks, the second movement had a sure place in the hearts of perceptive music lovers.

Licad was the usual generous soloist giving three encores (Buencamino’s “Lullaby,” the popular “Embraceable You” and Gottschalk’s “Souvenir d’Andalouisie”), for which she got two more standing ovations.

Here’s hoping the concert raised enough funds for the PPO US tour in June this year.