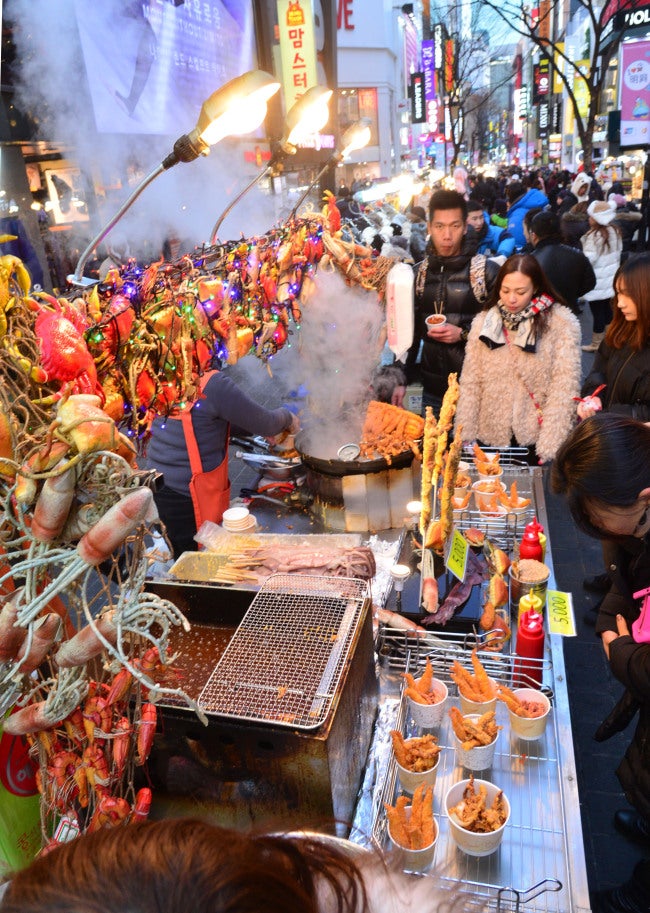 A city that once saw its street foods limited to greasy fried foods on a stick and traditional doughy dessert snacks, Seoul’s streets are now seeing new culinary creations and out-of-the-box dining options like never before.

Like many urban cities, one of the dynamic aspects of Seoul’s city life for both tourists and locals alike is the wide-ranging options of hot-off-the-street eats. And one cannot talk about Seoul street foods without mentioning the city’s street food mecca — Myeong-dong.

“Myeong-dong is better than any other place for street food,” said American Jeff Mills, who is currently working in Korea. “All the places known for street food sell the same things, such as tteokbokki or fish cakes, but Myeong-dong has more options.”

“Street food in Korea is really delicious and has a wide range of variations. I love it,” said Hong Kong-native Winnie Tam. “Now, it’s hard to find street food in Hong Kong since it became illegal, but eating on the street sometimes offers a special experience.”

Aside from the tourist-heavy shopping hot spot of Myeong-dong, fighting its way to become one of the city’s top street food spots is the university district Hongdae.

The bustling youthful neighborhood of Hongdae, known mostly for its fist-pumping club night life, is also slowly making a name for itself as one of the city’s go-to eclectic street food hubs.

Although the streets have their fair share of typical fried goodies and sweet and sour chicken skewers, at Hongdae the food carts attracting the longest lines offer more unique menu items coupled with what many young people like to refer to as foods that make for the best Instagram photos.

“The presentation of food is important for sure,” said high school student Bella Choi, who noted that her friend first stumbled upon Hongdae’s Kiss the Tiramisu street food stand on Facebook and decided to go check it out.

“These days, it is easy to find typical street food such as tteokbokki at franchise chains, so we wanted to try something on the street that’s special,” she added. “It’s important for us to be able to take photos that tell people, ‘Check out what we ate.’”

Easily identifiable by its long line, Kiss the Tiramisu is not your typical ice cream or tiramisu cake eatery. Rather, this small shop sells its signature soft-served tiramisu ice cream with mascarpone cheese and crumbled cookie crumbs in an easy-to-carry plastic wine glass, giving it that extra touch of Instagram-worthy sophistication. Word of mouth led it to be featured on the popular food TV program “Tasty Road.”

“Even though I have never heard of this dessert, the long line made me curious enough to join it,” said Baeg Seung-ho, who waited in line for 20 minutes to buy his cup of tiramisu ice cream.

While some of Seoul’s bustling shopping and nightlife neighborhoods see their street food culture thriving beyond expectations, popular tourist attraction Insa-dong — once well-known for its street food delights — is seeing the number of vendors quickly dwindling.

“Under the redevelopment projects, many of the snacks that were popular several years ago, such as the walking-cane-shaped puffed rice cones filled with ice cream and hotteok (a pancake-like dessert) have been banned,” she said.

Because Insa-dong’s claim to fame is as Seoul’s “traditional” neighborhood featuring antique shops, art galleries and various souvenir shops, the area is undergoing a series of changes in a push by the city to maintain the area’s cultural identity.

“From the perspective of our association, this is what is desirable,” Han added. “The president’s vision is to make Insa-dong a purely traditional place with Korean antiques, not a shopping street with cosmetic shops and food that is not traditional.”