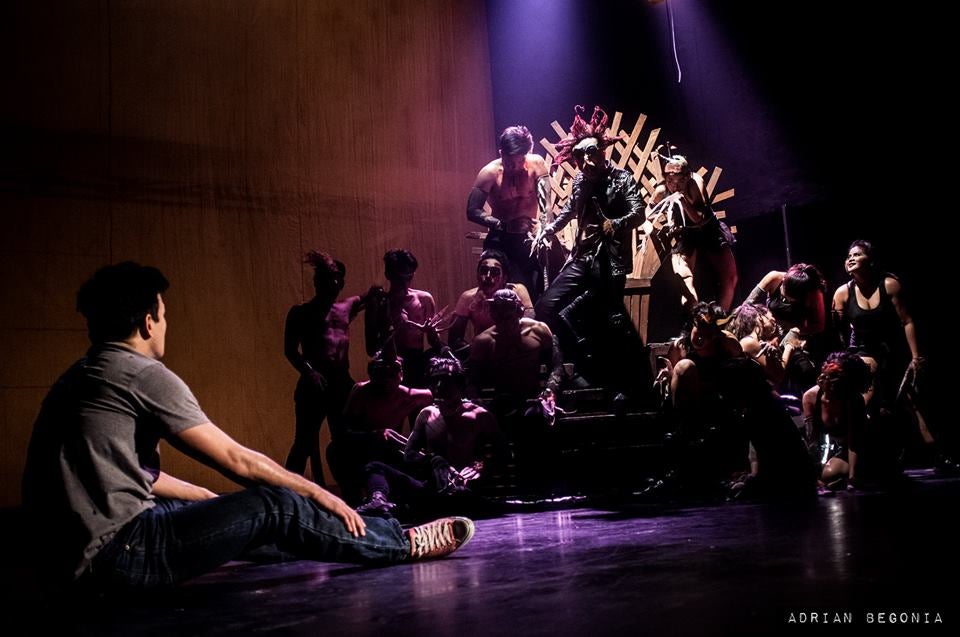 ‘Tisoy Brown’: Tales as tall as the man is small

When you watch Dulaang UP’s “Tisoy Brown: Hari ng Wala,” at some point you’d think there’s nothing better than that scene you just saw—but there would be another gut-wrenching one, and another, and another.

An adaptation of Henrik Ibsen’s “Peer Gynt,” the show is directed by José Estrella and adapted to Filipino by playwright Rody Vera.

Fair warning, this five-act play lasts for four hours—but you will be taken on a journey. Just a few minutes into the play, you’ll realize that the lead character Tisoy Brown is a liar, and when he lies, he lies big. He says he flew on a helicopter and has even met Satan. Oh really, Tisoy? That seems rich, his friends would jeer, but he’d still stick with his tall tales.

With integrity like that, Tisoy is the kind of person who wreaks havoc on the lives of many—beating up the men and leading the women on. But the tables are turned when, one reckless night, his hijinks catch up and get him by the throat. He becomes involved with Lourdes, whose father turns out to be the leader of a cabal of kapre (tree demons), and his life begins to proceed as unrealistically as the lies that he tells.

He transforms into a businessman who exports Filipino drug mules; gains brainy eyeglasses as a researcher looking for the lost world of Atlantis; rises into power as a leader of a cult; and is crowned the emperor in a mental hospital.

He is obviously lost, and yet he feverishly wants to prove that he has always been true to himself.

The engaging plot is a testament to the strength of the Ibsen classic, and more than that, it is made relatable because of the play’s Filipino lens. This is seen through the play’s many nods to Filipino culture; the entire adaptation, in fact, grafts Ibsen’s mythical tale of personal discovery into the larger narrative of the Filipino’s eternal search for grounding and identity.

Instead of Tisoy meeting trolls, he meets the kapre—who are, in fact, stand-ins for a drug syndicate. Instead of a reindeer hunt, Tisoy has to go with Americans from the nearby military base on a helicopter ride. And rather than give a silver button to the girl he is enamored with, Tisoy gives her his anting-anting.

The humor is distinctly Filipino. It keeps the audience entertained and adds breathers to the emotional scenes.

The language similarly helps viewers have an easier time understanding the existential ideas discussed in the play, though they are challenging still, and may necessitate a second viewing.

The range of emotions that Tisoy Brown has to go through is portrayed effectively by Neil Ryan Sese. He indulges in vulgarity, charms and courts sympathy, climbs the heights of arrogance, breaks into vulnerable pieces and surrenders; it’s a robust, solid turn.

Delphine Buencamino as Tisoy’s love interest Maristin (Solveig in “Peer Gynt”) is the epitome of virtue, but her most impressive scene comes when she breaks into song as the elderly version of her character. There is a deliberate raspy quality in her voice as her song of longing reverberates throughout the stage. It makes you believe this once-young woman has, indeed, been withered into her present form by the eternity of time.

Skyzx Labastilla terrorizes as Lourdes, the daughter of the kapre/drug lord. Her presence is rancid, cold and chilling. Martha Comia, meanwhile, is engaging as Inday, the bride still in love with Tisoy, and as Rosa, one of Tisoy’s more cunning cult followers. Though Comia’s roles are small, she gives them both a memorable quality—Inday a hilarious speech impairment, and Rosa a believable arc from virgin to seductress.

This production is not for the faint of heart. But the bold, stimulating, sometimes even shocking staging—plus the capable cast that director Estrella has managed to lash together into a throbbing whole—fully gives justice to the complexities of Ibsen’s play.