Those Starbucks planners are sending at least 1,000 students to the theater | Inquirer Lifestyle ❮ ❯ 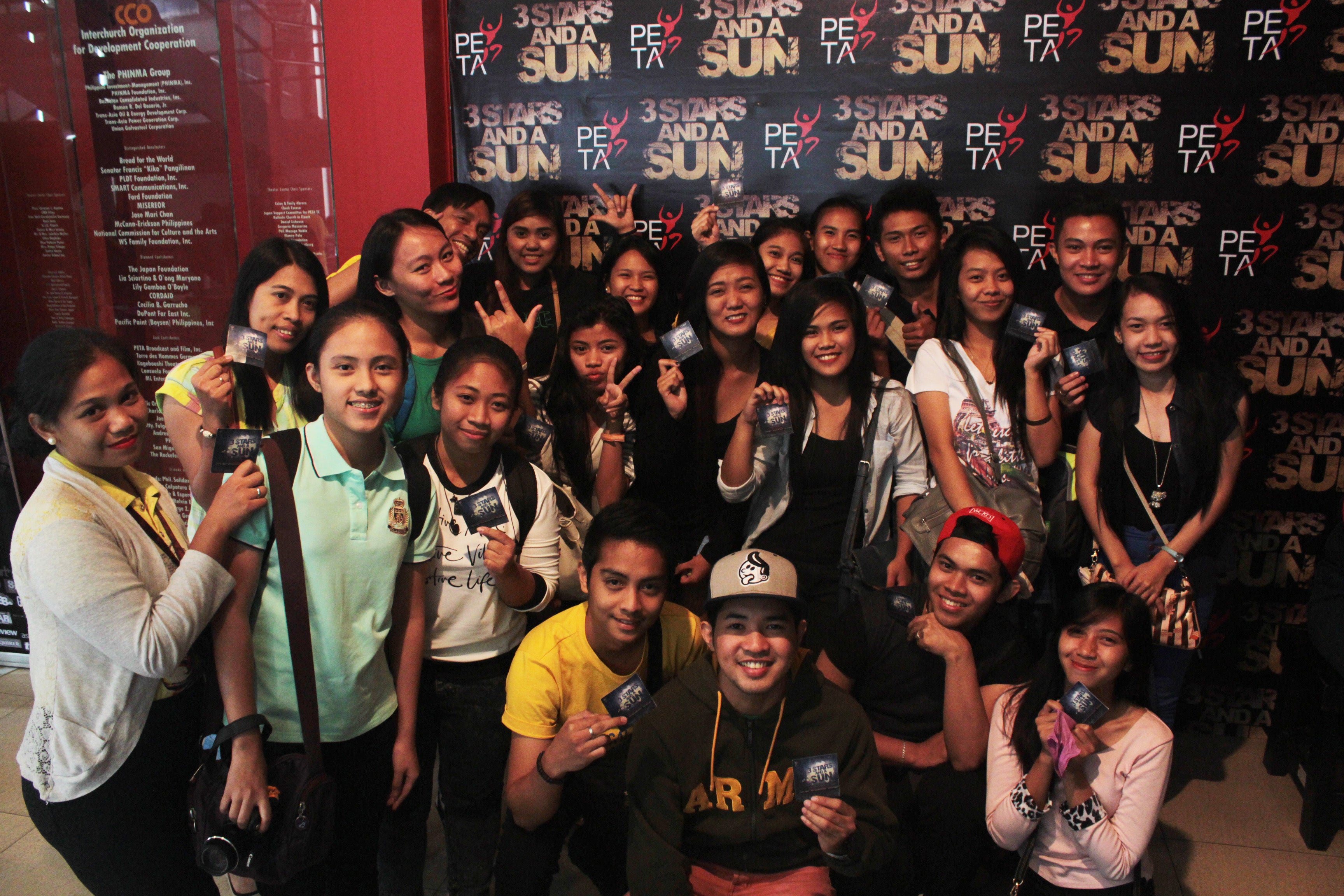 Students from Pamantasan ng Lungsod ng Marikina about to watch Peta’s “3 Stars and a Sun”. PHOTO FROM PETA

Those Starbucks planners are sending at least 1,000 students to the theater

These days, Starbucks is paying it forward with rap music.

More specifically, the global coffee brand wants students from public schools not likely to watch stage plays to get the chance to see “3 Stars and a Sun,” an original musical of the Philippine Educational Theater Association (Peta) that weaves in the music, themes and lyrics of the late rap artist Francis Magalona.

The production runs until March 6, the date of Magalona’s seventh death anniversary. “3 Stars and a Sun” is an experiment of sorts, dealing with “what if’s” in a dystopian Philippines; Peta has dubbed it “a daring social commentary on Philippine politics and culture” and intentionally timed it with the campaign period for the coming national elections.

TAP allows “disenfranchised” students access to Peta’s productions. The Starbucks fund for 2016 will be used to subsidize the tickets of at least 1,000 students from public high schools and state universities.

Starbucks will again help out in accommodating students who will watch “Mga Kuwento Ni Lola Basyang,” a children’s play featuring the stories of Severino Reyes, later this year.

Cabangon said facilitators talk to the students before the play “to guide them on how to view the performances.”

“In select instances, we also organize a debriefing, a question-and-answer after the performance to get feedback. It’s also a chance to clarify if there is something they did not understand in the play,” Cabangon added.

She noted that Peta is usually able to “solicit reflections and insights” from the young audience after a performance.

“Young kids consistently show great appreciation for theater. And you get to know how they feel about issues,” she pointed out.

Perez said Starbucks had given P1 million to Peta last year as part of its corporate responsibility program. She added that the nonprofit Teach for the Philippines is another beneficiary and has received the same amounts from the company in the same period.

Perez said the funds given to Peta and Teach for the Philippines were sourced from sales of its yearly planners available during the holiday season.

“The grant is unrestricted. It is up to (Peta) to decide where the funds would be used,” said Perez, who added that she has learned that part of the funds has been used to bring Peta productions to public schools, and to hold workshops for public school teachers to train them to engage students in a more interesting way.

In return, Peta also holds workshops where Starbucks baristas are taught theater skills they can use in dealing with customers. For example, Perez said baristas are coached on how to hold the attention of customers ordering coffee.

Apart from the TAP program, Cabangon said Peta will also utilize part of the Starbucks grant for artist-teachers in its April to May summer workshops.

“Because of the transition brought about by the K-12 Program of the Department of Education, there is an opportunity for the teachers to explore other forms and approaches to teaching, apart from the usual lecture,” Cabangon said.

“To be fair, a lot of teachers are really looking for creative approaches to teaching. We call it Theater In Education, the use of theater for teaching,” she added.

“Whatever material we develop, we explore on laboratory form. If we have germinal ideas, we (do) a mini-play and open it to the public, or friends only.  The idea is to test the stageability of new material, whether a story will fly,” she explained.

Peta has an exciting lineup of one-act plays that will focus on the theme of land under its laboratory program, she said.