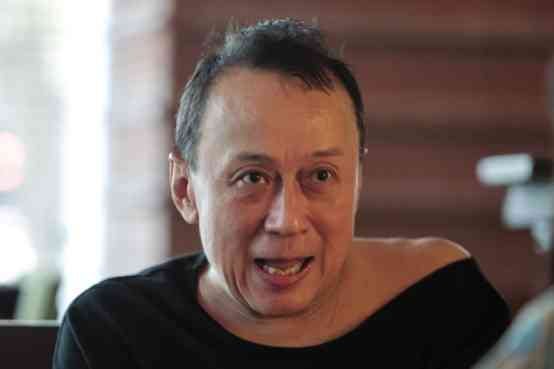 LOUIE Cruz on his recollections of Giraffe: “Everyone felt free.” LEO SABANGAN

Giraffe, the legendary bar, is back–for one more night

DURING the weekends, beautiful ladies abandoned their inhibitions and danced on tabletops. Expats hooked up with Filipino women. Waiters waded through the crowd, precariously balancing trays of food over their heads. Music came from overhead speakers, but the animated chatter could still be heard.

At the crack of dawn, the intoxicated customers refueled with a comforting duck mami.

Instead of music videos on the monitors, videos of animal safaris were played to suggest the name of the bar.

The intimate and democratic atmosphere was the main attraction of Giraffe Bar and Grille at the prime location of 6750 Ayala Avenue in Makati.

The average life span of a bar in Metro Manila is two years, but Giraffe flourished from 1994 to 2002.

The legendary Giraffe, a bastion of the late 20th-century nightlife, is having a one-time revival on March 3 at Privé in Bonifacio Global City.

“Giraffe had a very Western atmosphere,” said Edmund Fritz Weber III, the bar’s former general manager who’s now working in man power and food services. “People drank standing up. In most locally-owned bars, everybody is seated, and that hinders people from meeting other people. We had standing tables that encouraged the hook ups.”

With the influx of foreign investments in the ’90s, consultants and executives assigned to the Philippines were mostly singles. Some businessmen based in Hong Kong and Singapore would fly to Manila for the weekend just to hang out at Giraffe.

Weber observed that Filipinos were generally uncomfortable drinking with foreigners. Giraffe’s atmosphere, however, was so relaxed that locals didn’t mind brushing elbows with them.

In fact, when there were fights in Giraffe, these were usually Pinoys vs. Pinoys, and expats vs. expats, said Weber.

Yet, despite Giraffe’s posh location, it didn’t emphasize exclusivity.

“Today, if you’re not a VIP, you won’t be given that much importance,” said Giraffe PR maven Luis “Louie” Cruz. “Giraffe was a great equalizer. You could be a Juan dela Cruz standing beside an Aboitiz or Lopez. You could be a straight, constipated Makati boy talking to a Malate designer. No one had the ego of status. There was exchange of thoughts. There were no barriers. Nothing has replaced Giraffe with that kind of freedom and ambience. It was like a friendly neighborhood bar.”

The convivial environment invited people to be spontaneous. They danced when they felt like it. When the DJ went retro with ’80s kitsch like “Annie Batungbakal” or ’70s disco like “YMCA,” models shook and shimmied.

Giraffe launched itself as a bar in 1994 after an unsuccessful start as a restaurant. The founding directors included former hotelier Perfecto Quicho and businessmen Raymundo “Ting” Feliciano and Al Tengco.

Antonio “Tonyboy” Cojuangco stepped in as a major investor.

Cruz herded in high society, the media, the young and beautiful faces, and fashion industry people.

On weekends, the bar easily packed in 1,200 warm bodies. Giraffe set up a beer bar outside so they could drink al fresco.

For liquor companies, Giraffe was a perfect launch pad for their products. Since the drinks were poured in the right amounts, nobody complained about stiff prices. Even the iced tea contained the correct amount of alcohol.

Good food was crucial to its success—gambas made from black tiger prawns, Vietnamese spring rolls and original nachos with melted premium cheddar cheese.

Guests gorged themselves on pizzas topped with Laguna cheese and tinapa, Peking duck, salami with prosciutto, and the classic mozzarella with basil and anchovies.

Giraffe’s clientele grew when Tagalog movies started mentioning the bar’s name in the dialogue. Giraffe then imposed a dress code.

Its design was unique. The center bar anchored the 180-square meter space, with islands of standing tables.

The layout was conducive to “cruising” or hunting for a partner. “You could talk to the person to your right or to your left,” observed Cruz. “If you got rejected, you wouldn’t be embarrassed. Today clubs follow a more formal seating arrangement. If you want to meet a person, you’d be embarrassed to go to the table.”

“The bar was called the see-through bar,” added Weber. “You could see who were behind it. Nobody could accuse you of staring at them.”

The straights gravitated toward the window side, while the gay population hung out at the opposite side, near the ramp leading to the restrooms.

The elevation presented the best vantage point for the bar, and opportunities to check out the hotties entering the toilet.

The intimate atmosphere was conducive to love matches.

Feliciano recalled being reunited with his former girlfriend Roberta Lopez. They’re now living happily ever after.

There were other attractive couples who had their first encounter at Giraffe, though their relationships didn’t last.

The scandals were fodder for lunch and dinner conversations. Cruz once photographed a blow-by-blow reenactment of a brawl in the ladies’ room. Former models Tetta Agustin and Cristina Valdez portrayed the socialites who pulled each other’s hair and rolled under the sink.

Female friends would ask Cruz if he had seen their husbands at the bar. Cruz would diplomatically reply, “Look, let’s stay good friends. Don’t ask me these questions.”

There were celebrity sightings. Michael Bublé sang two songs for a drink. Sting would have stayed longer, had he gone unrecognized.

During the Asian crisis in 1997, bars and clubs reported plummeting sales, but Giraffe kept raking it in. On a Monday night, it would earn P70,000. Friday nights brought in more money, about P350,000.

To keep the habitues excited, Giraffe organized theme events. The Pajama Party drew the chichi crowd in its sleepwear and negligees. Cruz flashed his bikini under a robe.

“I couldn’t get sponsorships then. But after that party, people lined up to offer their products,” said Feliciano.

At the height of the Balinese craze, guests came in resort wear and wraparounds while sipping iced tea laced with their sponsor’s liquor.

For his 50th birthday, Cruz celebrated Mass in Giraffe. Then 50 friends queued to give him presents.

When “In and Out” lists were still fashionable, Cruz invited friends to celebrate bad taste in their worse attire.

Parties with a conscience

However, Giraffe wasn’t just high jinks. It also had a social conscience. The human immunodeficiency virus-acquired immunodeficiency syndrome (HIV/AIDS)-related deaths of Cruz’s friends prompted him to hold fund-raisers. Models and “It” girls dressed up in aprons by Inno Sotto, Mike dela Rosa and Michele Sison, with waiters in tow. The waiters took the customer’s order while the guest “waitresses” solicited donations through tips that went to HIV/AIDS foundations.

The women competed for the biggest donations, urging the customers to write their checks immediately. The reward was a pinch in the butt.

In one Halloween party, the bar was buried under funeral wreaths dedicated to Giraffe’s fellow animals, such as Donald Duck. “People thought a real wake was going on,” said Cruz.

The parties climaxed with the New Year celebration. Right across the Glorietta Circle, Giraffe was the place to welcome the sunrise of the first day of the year. The parties were chronicled by writer Larry Leviste with photographer Eddie Boy Escudero in tow.

“Once the person is inside the toilet for more than three minutes, you know…” Cruz said. “Some got drugged before going to Giraffe, just to get a buzz. The drugs back then were the good ones. There was no shabu or ecstasy…”

Despite the crowds, though, Giraffe never had shoot-outs.

“Whenever there would be a fight, we would make the parties shake hands and settle their differences. If they couldn’t, we’d ask them to leave and come back another day, when they felt better. But they couldn’t leave at the same time, to prevent the fight from getting bigger,” recalled Weber.

Businessmen would ask Feliciano about a possible franchise.

“Giraffe was a phenomenon,” said Feliciano. “People tried to imitate our concept. One guy said he would copy the concept in Vietnam. Months later, somebody came up to me, said, ‘In Ho Chi Minh, I saw a bar that looks like this. Is it a franchise?’ We said ‘No.’”

Giraffe could have lived on today, although with some reinvention, were it not for the usual headaches of running a restaurant—specifically, pilferage of booze and the threat of the staff organizing a union.

Although this “animal park” is gone, its memory as one of the best bars the country has seen can’t be beat.

“Giraffe was one reserve where everyone felt free,” Cruz pointed out.