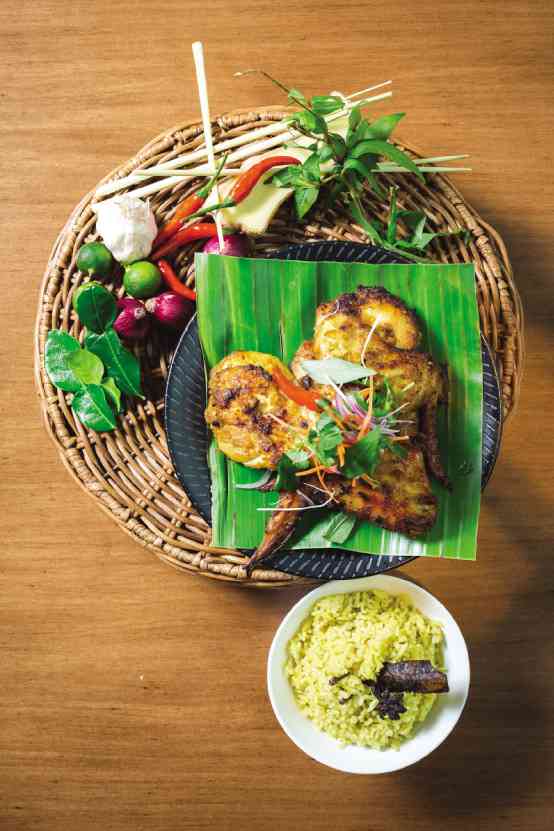 MARINATED in Asian herbs and spices for 20 long hours, theNyonya Chicken is grilled on charcoal and served with turmeric rice.

Anticipation for the opening of Shangri-La at the Fort Hotel in Taguig has been building up since word got out.

In Metro Manila, the excitement is not so much about the hotel’s luxury accommodations (unless you’re an avid staycationer), but rather on the 15 food and beverage establishments it will launch this year, seven of which will be run by Shangri-La.

They are: Canton Road, to serve southeastern Chinese cuisine; Raging Bull Steakhouse and Raging Bull Burgers; Samba, which will offer healthy dishes inspired by the flavors of Spain and South America; Limitless, a laid-back lounge by day and a happening club by night; High Street Lounge, which will carry a wide range of teas; and, the first to be unveiled, High Street Café, Shangri-la at the Fort’s all-day dining restaurant.

High Street Café may be a bit hard to find as it hides behind a floor-to-ceiling wooden bookshelf. Slide it open and it reveals a hallway lined with grab-and-go items such as croissants, muffins and Danish pastries. There is also a coffee counter for guests in a rush.

There are nine neighborhoods in one culinary high street, as its tagline suggests.

The first includes morning staples such as yogurts, cereals, and dried fruits and nuts for the breakfast buffet.

Come lunch and dinner, the booth transforms into a seafood bar lined with kilawin and ceviche.

Next to it is the salad bar where you get to choose among three kinds: composed salads; salads in jars; and a create-your-own, which gets tossed only upon order.

The Mediterranean post has whole legs of jamon sliced to order, hummus, babaganoush and cold mezzes, and a mozzarella bar with an array of toppings. Sharing the space are traditional tapas and assorted cheeses by local artisans and from imported brands.

Cross over and you will be greeted by a giant locally sourced tuna, which the Japanese section has on display every day, to be used for High Street Café’s sushi, sashimi and nigiri. It will also have soba noodles and a variety of tempura fried on the spot.

The next section offers pastries, with chef Anthony Collar presenting a wide selection of sweets, from tarts and donuts to waffles and pancakes.

Whole cakes will be available for retail, as well as pies fresh out of the oven.

Noteworthy are the desserts that incorporate spices, like the dark choice praline with star anise, and the bay leaf and cinnamon-flavored eggless ice cream.

An Asian noodle bar carries all-time favorites such as laksa and Shanghai braised beef noodles. A massive red clay jar stands in the middle of the booth to be used to prepare double-boiled soup, which can be scooped straight into bowls.

Right across the noodle stand is the continental section with dishes such as Spanish paella, duck confit, sous vide lamb and baked potato, which come right off a specialized machine imported from the United Kingdom.

The rotisserie section is perhaps the most decorated and attention-grabbing of the lot. It has whole slabs of bacon, Asian sticks like satay and yakitori, and grilled steaks adorning the counter.

Most of the meats are finished on charcoal to get that smoky flavor—from lamb cutlets with chimichurri and pork belly adobo skewers to beef tenderloin with whiskey and muscovado sugar sauce.

Executive chef Joris Rycken has made sure to present many options and varying flavors for the meat-loving crowd. Servers go around the room and slice churrasco on their tables.

The last station, at the far end of the room, is the Chinese wok and Filipino section. Half of the space is reserved for steamed dimsum and roasts such as barbecued pork and Peking duck, while the other half is devoted to traditional Pinoy fare like sinigang.

One of its distinct offerings is the claypot rice; the café will have two to three versions each day, served to the diner right on the hot vessel.

Coffee and tea cocktails are also available, with different kinds of iced teas and flavored water such as strawberry and basil or malunggay and calamansi.

You can also expect Nyonya Malaysian dishes to pop up in the impressive menu every once in a while, as executive sous chef William Tan promises to revisit the cuisine.

With more than 45 talented chefs ready to serve over 250 people per sitting, the High Street Café is ready to open.