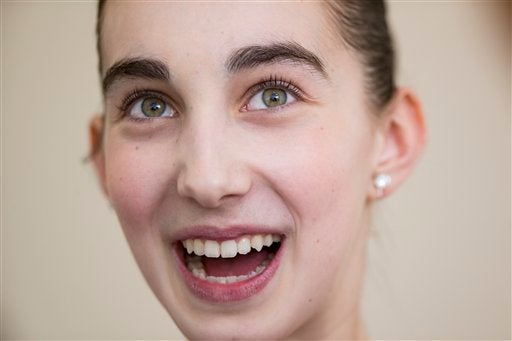 In this photo taken on Thursday, March 3, 2016, Harper Ortlieb, from Mount Hood, Oregon, smiles in a ballet class at the Bolshoi Ballet Academy in Moscow, Russia. Among the dozen 15-year-old girls in lavender leotards in Tatyana Galtsevas class at the Bolshoi Ballet Academy, one is different. She is Harper Ortlieb, an American, who left her small town in Oregon to move to Moscow to follow her dream of becoming a prima ballerina. (AP Photo/Alexander Zemlianichenko)

MOSCOW — Among the dozen 15-year-old girls in lavender leotards in Tatyana Galtseva’s class at the Bolshoi Ballet Academy, one is different. And it’s not just because of her long, swan-like neck.

She is Harper Ortlieb, an American, who left her small town in Oregon to move to Moscow to follow her dream of becoming a prima ballerina.

The prestigious academy has 84 foreigners among its 721 students, but few are accepted when they are as young as Harper and few are integrated into the regular Russian program.

“She is a very gifted girl. She is all ballet, all inspiration,” Galtseva said. “When children are talented, regardless of their nationality, they are alike in some way in how they approach what they do.”

The Bolshoi took notice of Harper during a summer program it held in Connecticut and offered her a place in the Moscow academy. She knew her teachers would be tough and that it would be a challenge to be so far away from home, but it has been even harder than she expected.

“It’s been very difficult, but with that comes strength and with that I improve,” Harper said. “I feel like I came here to get better, to improve, not only technically but emotionally so when I dance people see something.”

One concern for her parents in the decision to send their daughter, then 14, to Moscow was the strain in U.S.-Russian relations and the strong anti-American sentiments in Russian society.

Harper, though, says she feels accepted by her classmates. Her teacher concurs, noting that just that morning some of the other girls had brought her a skirt to wear over her leotard because they were expecting a visit to the class by foreign journalists.

In her Moscow neighborhood, the women in her favorite grocery store have taken a shine to the delicate American teen, helping her pick out fresh fruit and keeping her favorite almond butter stocked. And in the local Starbucks they have learned to spell her unusual name on her cup.

Her teacher believes Harper has what it takes to be a classical ballerina, possessing not just the necessary physical and aesthetic qualities but the will to learn.

“She is extraordinarily attentive,” Galtseva said. “She is always smiling. Such a sweet, wonderful girl.”

If Harper wants to be one of those rare foreigners who receive a diploma from the Bolshoi Ballet Academy, she has three more difficult years ahead. But now she has her mother back by her side.

Harper’s mother, Layne Baumann, made two trips to Moscow after she and her husband, Tim Ortlieb, dropped off their only child in September. In February, Baumann decided to move to Moscow at least for the rest of the school year, and she now rents an apartment two blocks from the academy, which has allowed Harper to move out of the dormitory.

At the end of each day, Baumann talks to her daughter about what she learned in class and logs onto Skype so Harper’s father can join the conversation from their home in Mount Hood, Oregon, 11 time zones away.

Harper started ballet at a local dance school when she was 3 years old. When she turned 11, she was accepted to the School of Oregon Ballet Theatre in Portland, a three-hour roundtrip journey that she and her mother made six days a week.

“Being 3 in ballet class, it’s fun and games,” Harper said, smiling at the recollection. “My teacher was wonderful, it was so much fun. And then once I got more professional I realized how much you have to sacrifice, and how difficult it is.”

She talks about learning to deal with the pain of wearing pointe shoes and the constant feeling of doubt that she’s not good enough.