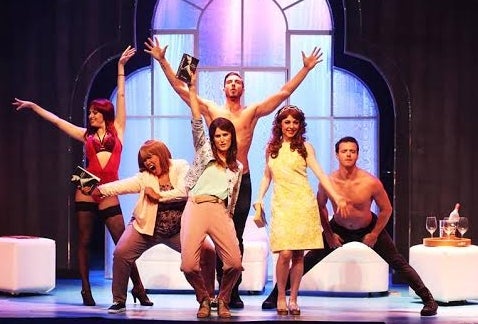 A uniformly engaging cast that appears to genuinely enjoy leading the audience on for a hoot of a ride. PHOTO FROM 50SHADESMANILA

Regardless of  how you feel about E.L. James’ best-selling book, “50 Shades of Grey,” make sure you leave your prejudices at the door once you watch its musical send-up, “50 Shades! The Musical Parody.”

The show, staged by 9 Works Theatrical and Vivre Fort Entertainment, is on an extended run until March 20 at the Carlos P. Romulo Auditorium, RCBC Plaza, Makati City.

True to parody, “50 Shades!” pokes fun at everything in its sight. The book, the author, its characters, the S&M practices they indulge in, even the audience  are all fair game.

And true to its, er, literary roots, the production does not scrimp on the pseudo-erotic, scenes either. There’s a fair share of beef, beauties and bondage designed to lure your eyes, and simulated scenes that shove the subject right in front of your face—but always with the right balance of humor and titillation.

While this particular production, directed by Albert Samuels, is an easy blend of satire and self-mockery, the script is smart without being too pompous or self-congratulatory. In short, “50 Shades! The Musical Parody” is not above laughing at itself, too.

Exaggeration, calculated and deliberately stretched to deliver the punches at the right time, sets the tone from the get-go. It’s one way to ridicule the characters and the storyline in the book, while holding up a huge mirror to the audience, in a way daring them to see what they either loved or hated about it, especially when it comes to sex.

James’ book was immensely popular because it played on a lot of readers’ fantasies, regardless of their gender or whether they were repelled by or attracted to its sado-masochist elements.

But it’s the humor in this musical parody that, in a sense, makes the situations in the book and the musical “relatable,” if you can call it that. For example, the latent abuse, treated as a perverted form of passion in the book, is made an object of cheerful ridicule in the musical, giving the audience the safe ground from which to enjoy its depiction on stage.

Also, the winning performances of the ensemble, especially the leads, effortlessly lure the audience into seeing both the humanity and the intended caricature of the characters.

The doe-eyed, virginal Anastasia is played by Brenna Wahl with a pandering innocence that makes her an easy and yet not-so-totally-clueless prey to the titular Christian who equates love with pain. She also gets to sing a song like “There’s a Hole Inside of Me.”

Without giving away spoilers, Christian—a performance of wonderful abandonment and angst by Greg Kata—turns out to be quite different from what the audience expects him to be. The readers who fell in love with the man of mystery in the book would have to blink twice to make sure they recognize him in this musical.

Those readers—the audience, in fact—are ably represented in the story by three members of a literary club who pick James’ novel as their book for the month. Chloe Williamson, Katlyn Frotton and Bituin Escalante let it all out as the bored, repressed women whose experience of the book reinvigorates them and, surprise, brings back romance into their dull daily lives.

Christian and Anastasia play their domination-submission dynamic with relish. He wants her sexual enslavement, and she wants his heart. The question is: Who wins?

The answer might as well be, at least in this musical: Who cares?

Even without reading the book or watching the movie, the audience can readily spot the paper-thin plot and motivations set up to explore kinky sex and so-called questions of love. So in this musical, people finally have the chance to laugh at the book’s unintended hilarious moments, without giving up the pleasure of indulging in its sexier aspects.

And just to rub it in and bring the material closer to home, Samuels has his foreign cast members interject popular Filipino phrases and pop-culture elements at all the right moments.

It’s a quick and racy 90 minutes at the theater, thanks to a smart blend of witty, self-aware mischief and a subversive understanding of what the book really is all about, plus a uniformly engaging cast that appears to genuinely enjoy leading the audience on for a hoot of a ride.

“50 Shades! The Musical Parody” is recommended for mature audiences, 18 years old and above. Call 4706956 or visit www.50shadesmanila.com.