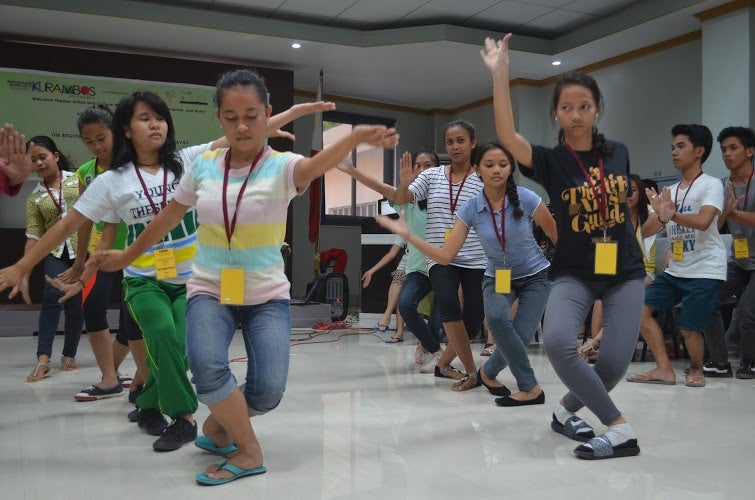 The launch of the new regional theater network Tabok (a Bisaya term that means “to cross over”) saw more than 80 theater artists and cultural workers from Bohol, Cebu and Negros Oriental come together to participate in fora, collaborate on ideas, present a festival of plays and approve the core aim of Tabok to “facilitate the promotion of Visayan culture in the communities through theater.” PHOTOS COURTESY OF GARDY LABAD

Tabok: A new collective aims to connect the Central Visayas islands through theater

On Feb. 20, a Saturday, a rustic cockpit in the town of Baclayon in Bohol became a theater space when it hosted a festival of plays performed by theater artists from Bohol, Negros Oriental and Cebu.

Earlier that evening, electricity had gone out at the venue due to a tripped cable. But the temporary power outage did not quell the enthusiasm of the various groups, which continued to rehearse and interact with each other in the dark.

This was a fitting, perhaps even poetic, illustration of the adversities and challenges facing regional theater groups
—but in which the collective spirit of resilience and creative joy has hardly diminished.

The festival was the culmination of a daylong gathering to launch a regional theater network called Tabok, a Bisaya term that means “to cross over.”

More than 80 theater artists and cultural workers from Bohol, Cebu and Negros Oriental had to traverse seas and distances to gather at the Region VII NIA Training Center in Tagbilaran to discuss and approve the vision for the creation of Tabok (“a relevant and dynamic Visayan theater”), its mission (“to build a network that shall connect and strengthen theater in the Visayas”) and goals (“facilitate the promotion of Visayan culture in the communities through theater; enhance artistic capabilities through training, collaboration and sharing of resources to achieve excellence; and create mechanisms to support the sustainability of the network members”).

These founding statements were drafted by a core group of island cluster representatives in a planning meeting held in June 2015. After the adoption of the core statements, three simultaneous workshops were held in the afternoon, led by Gerardo Calle for Pangalay,  Keats Ronquillo for Stage Combat and Hope Tinambacan for songwriting.

The immediate precursor for Tabok’s formation was the convergence of 15 theater groups during the Kamalig Central Visayas consultation held on May 25-26, 2015 at Silliman University, where members of all the groups shared their personal and organizational stories, triumphs and challenges.

Lutgardo “Gardy”  Labad, a stalwart of the Philippine Educational Theater Association (Peta) and a leading mover of theater and cultural work in Bohol, also talked about the history of Philippine theater.

It was at the end of this consultation that the participating groups expressed a desire to establish a formal network among themselves and other theater practitioners in Central Visayas.

Although the Kamalig consultation was the first organized effort to gather these regional theater artists, the pulse for the initiative really began when two youth artist-leaders, Junsly Kitay of the Youth Advocates Through Theater Arts in Dumaguete City, and Jerrey Aguilar of Bohol’s Kasing Sining, attended the Ang Sikat ng Teatrong Pilipino conference at University of the Philippines Diliman in November 2014.

There, they realized that their generation was not sufficiently represented in these national conferences and hardly knew of each other’s work.

Kitay and Aguilar jointly expressed the need for their colleagues to come together and form a network for support and collaboration in the regions—a vision that found a sympathetic ear in Labad and this author. We are both artist-teachers of Peta whose decades-long work in community theater has been inspired by the blueprint of a national theater network that was conceived by Peta founder Cecile Guidote in the 1960s, and which has since been part of Peta’s operating principle.

Tabok is a concrete step in realizing the aspirations of Visayas-based theater artists like us to work more closely with and learn from each other in creating theater that is relevant and reflective of the local communities we serve.

As Labad put it to the delegates at the Tabok launch, “You, our dear youth, who so passionately love your gifts for the dramatic arts, have taken up a commitment to pursue a dream and a vision that take their roots in the many great efforts in the past to forge a national theater movement in the regions—most outstandingly, the historic Peta regional chapters in the ’60s, Dungog in the ’80s, Makiisa and Bugkos in the early ’90s…

“[You] are now about to write yet another page in our regional and national cultural history. May you succeed in making theater a force for social transformation in our schools, communities, towns and cities of these central isles, making it a beacon of hope and unswerving determination to realize true sustainable development…”

The National Commission for Culture and the Arts, Peta and the provincial government of Bohol all gave invaluable support to the Tabok assembly, workshops and festival. And, as an indication of the commitment of each participating group to the vision of the network, all the performing groups that came for this historic crossing over for regional theater shouldered their own travel expenses.