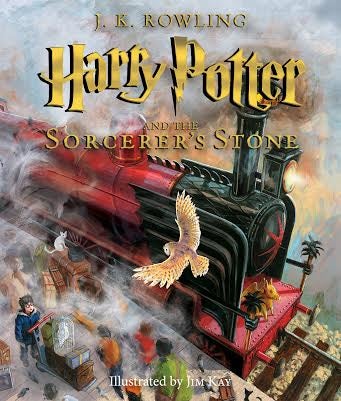 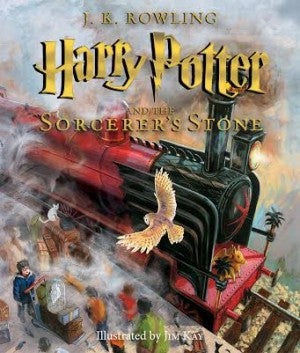 Interestingly enough, what “Sorcerer’s Stone” has never had is a children’s book-style edition with big, striking illustrations. The closest it has gotten are the beguiling cover and chapter illustrations by artists Jonny Duddle, Mary GrandPré and Thomas Taylor. Most people’s concepts of the “Harry Potter” universe come from those artists’ images as well as the actors and designs from the 2001 film adaptation by director Chris Columbus.

Imagine if you could experience the book for the first time once more. Imagine if your ideas of what Harry himself and the characters who inhabit the Hogwarts universe look like can be reinvented.

The complete text of Rowling’s magical first book is here, packaged in a deluxe oversized hardcover with over 100 truly astounding color illustrations from Kay. There’s a dreamlike quality to Kay’s work that is made even more evident when you look close at the images. There is a wildly whimsical and madly detailed dimension to the illustrations. The Sorting Hat reveals all these crazy patches sewn together and a twisting feather as Harry looks up at the crazy thing balanced on his head with a bemused expression. Hogwarts itself looks like its shimmering on a hill. Harry contracts himself so he can fit into his cramped, cobwebbed cupboard. Diagon Alley comes alive with some truly quirky storefronts.

Beyond the sheer beauty of his illustrations, Kay brings an entirely new interpretation of Rowling’s story. It almost looks completely different from the movie designs beyond the broad strokes such as Harry’s glasses. Kay’s Ron Weasley and Hermione Granger look very different from Rupert Grint and Emma Watson.

What this all means is that the Illustrated Edition effectively gives even seasoned readers a uniquely new reading experience—and also makes for a great literary and visual introduction to readers who really haven’t experienced the “Harry Potter” universe yet, such as parents sharing it with young children.

Rowling herself loves this. “Seeing Jim Kay’s illustrations moved me profoundly,” Rowling said of the book. “I love his interpretation of Harry Potter’s world, and I feel honored and grateful that he has lent his talent to it.”

This Illustrated Edition is the first of its kind. The intent is to release all seven “Harry Potter” novels in this wonderful format.

It’s a great year to be a “Harry Potter” fan. “Harry Potter and the Cursed Child,” a new play by Jack Thorne, John Tiffany and Rowling will makes its appearance on the West End stage in July. The “Cursed Child” scriptbook wings its way to bookstores in the same month. The movie adaptation of Rowling’s 2001 book “Fantastic Beasts and Where To Find Them,” starring Eddie Redmayne and directed by “Harry Potter” veteran David Yates, unspools on screens in November.

Let’s start this distinctly “Harry Potter”-flavored year at the very beginning, with a twist. Read J.K. Rowling’s “Harry Potter and the Sorcerer’s Stone”—and be enthralled by Jim Kay’s postcards from the Hogwarts School of Witchcraft and Wizardry.