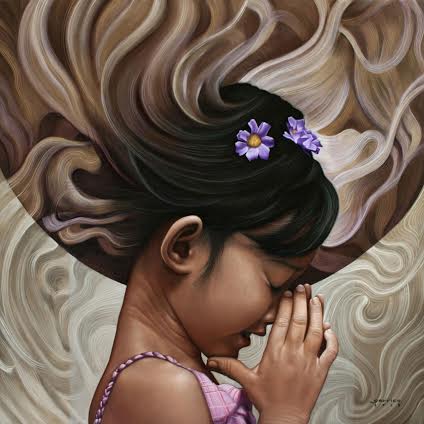 Art historian Ann Higonnet notes that this would all change in the 18th century with the shift in the social understanding of consciousness and maturity. Thus, the so-called “Romantic Child” was born.

In his second solo show, Inscapes, Gerrico Blanco re-appropriates the Romantic Child in a collection of 15 new works that traverses colorful dreamscapes of fantasy and adventure. Blanco, 39, who considers his own experience of fatherhood as a pivotal influence in making art, situates his subjects within dream worlds where innocence is neither trivial nor clichéd.

In his oil paintings, children are the purveyors of their own mythical narratives, heroes of their own grand escapades. The signature piece “Happy Thoughts” depicts a girl with her eyes closed, hands clasped as if in prayer, her hair flowing in a dynamic spiral of ethereal energy.

Slumbering children retreat into tranquility in the works “Rejoice,” “Van Gogh’s Lullaby” and “Superheroes,” the artist’s homage to his own sources of influence including Michelangelo, Vincent Van Gogh, Marvel and DC Comics.

Three of Blanco’s oil paintings are odes to music. In the works “Fantasia,” “Joyride” and “Serenity,” the artist vests three girls with the power to summon the hypnotic, life-giving power of harmony.

Evident in these renderings of the Romantic Child is Blanco’s profound respect for his subjects, whom he treats without any hint of condescension. These are children not to be simply ogled at or infantilized and quickly dismissed as helpless or inconsequential. Instead, they are the dreamers and the storytellers whose unadulterated views of the world have the power to show us new ways of understanding ourselves.

Highly-intricate and drawn with a very graphic sensibility, this second set of works dubbed as the “Imaginary Jungle Series” are surreal re-imaginations of animals of the wild as playthings, circus creatures and objects of fantasy. Rendered in black and white, they appear as though random pages from an old graphic novel or storybook for children.