To this 64-year-old, yoga is the ‘constant companion’ | Inquirer Lifestyle ❮ ❯ 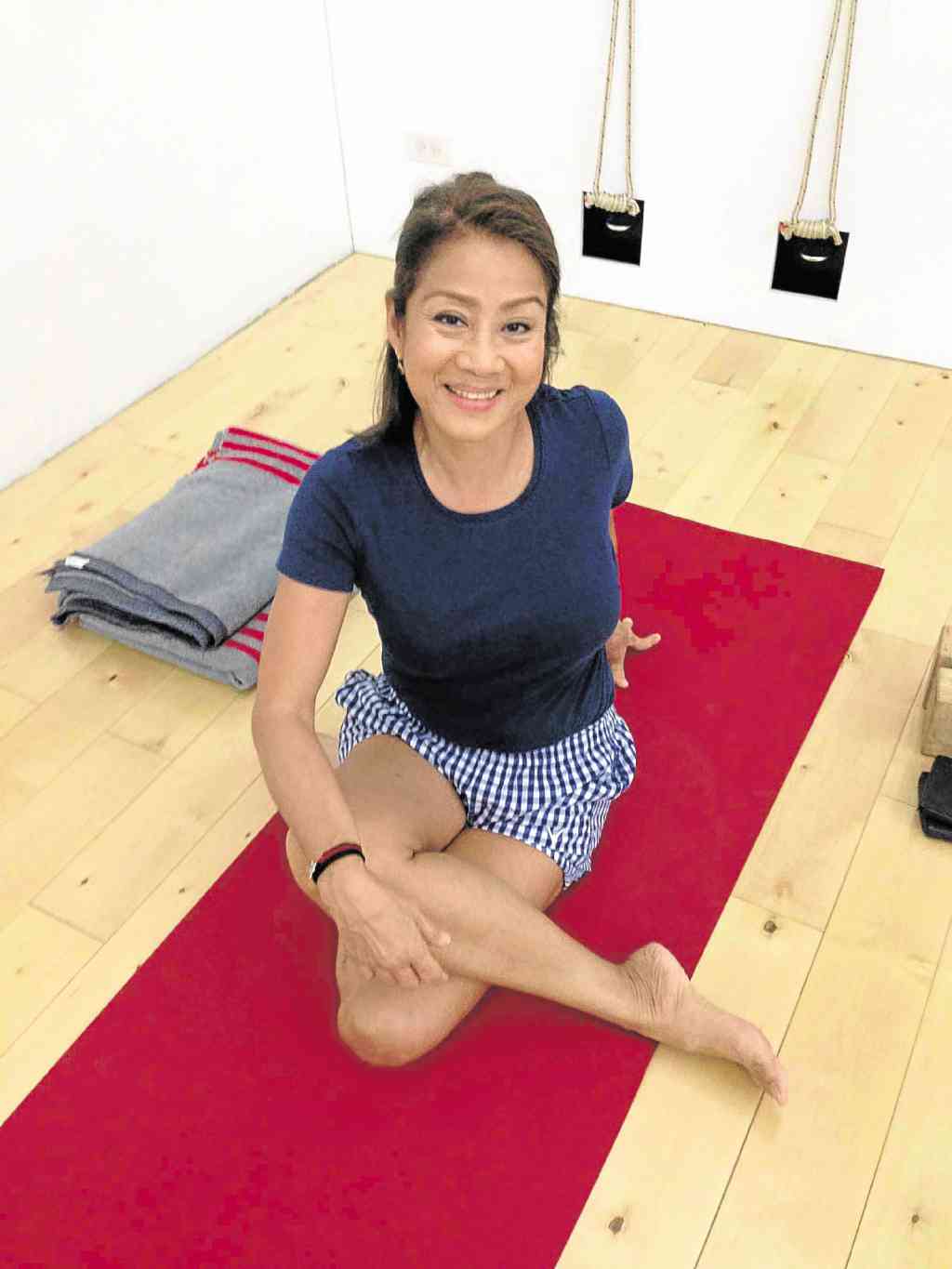 MONICA del Rosario on the yoga mat: ‘Respect and understand your body when it ages.’

To this 64-year-old, yoga is the ‘constant companion’

She walks to and from her condo unit on Pasong Tamo to the Iyengar Yoga Center Manila (IYCM) studio at Rockwell, Makati, where she teaches—another hour and a half, one way. On sunny days, she swims a few laps, too.

She travels regularly and hopes to visit more places, as well as aspiring for higher certification as a yoga teacher. After all, she’s only 64.

Monica is a perfect example of a senior who has managed to hang on to her youth, physically and mentally, by simply not holding on too tightly. She can wear skinny jeans and spaghetti-strapped summer tops that would put younger women to shame, and swears she can’t leave the house without earrings.

Yet, she excitedly flashes her senior citizen card when it’s time to pay the bill, and believes that, even if she is impossibly svelte, there are some styles (like Azzedine Alaïa’s bandage dresses, for example) that are no longer appropriate for her.

In fact, she and her hairdresser are working on slowly weaning her away from her beloved highlights, so that she can embrace her graying hair.

“But it might take a while, hindi pa kaya ng powers ko,” she says with a laugh.

She applies the same philosophy to the practice of Iyengar yoga, a precise, systematic style of yoga which she discovered belatedly, although she had tried other styles.

“You have to understand your body and respect it when it ages,” she says. “Be kind to it! When I was living the single life in Hong Kong, I’d go clubbing until 5 a.m.; it was fun, but after a while your body can’t take it anymore. Even hangovers and jet lag are harder to deal with!”

She had been doing meditation and siddha yoga, as well as going to the gym, when she attended her first Iyengar yoga workshop in Hong Kong in 2001.

“Oh my God, it was so hard,” she recounts. “I was shocked, it was so different. The teacher would tell us, suck in your ankles—what on earth did that mean?”

Still, Monica liked it so much, she became a regular student, all the way until she began teacher training in 2010 under Hong Kong-based Iyengar yoga teacher Linda Shevloff and later, George Dovas. “It was very different, orderly and sequential. And there’s so much to learn from every pose.”

Although her mother had discouraged her from playing team sports as a child—she was afraid her daughter would get wounds and scars—Manila-born Monica still grew up an active go-getter.

She studied mass communications at the University of the Philippines, working on the side as tourist guide and even selling refrigerators, but dropped out of college to answer a Cathay Pacific ad in the newspapers.

A long career with the airline, at a time of rapid growth, followed. Monica traveled a lot as a flight attendant, and was later invited to become a trainer.

Living in Hong Kong, she would hike regularly outside the city. She learned to ski in Whistler, Canada, in 1987, and honed her skills on the slopes of Aspen, Colorado as well as Switzerland and Austria.

She did get her share of injuries, including torn knee ligaments that required surgery— another reason the yoga came at the right time.

The deepening of her yoga practice has, in her own words, helped her transform inside, as well.

In the ’80s, Monica recovered from a brief, unsuccessful marriage, with positive thinking and spirituality. Now, she likes to call yoga her “partner,” a constant companion.

“It’s true that we all start very physical in the practice,” she notes, “but if you persevere, you learn so much more.”

While yoga has conditioned her to eat in moderation, kept her weight in check, and maintained her glowing skin, it has also taught her bigger lessons, like humility and patience.

“I remember a teacher saying during class, ‘Do what you can, then learn to stop and be happy and humble there, because it will come.’ It took years for me to understand that, eventually, things will, indeed, open up to you.”

She notes how she had to conquer a fear of falling to be able to do handstands, for example, and to overcome much pain when doing shoulderstands. Indeed, watching her do an unwavering Utthita Hasta Padangusthasana (standing on one leg, holding the toe of the extended lifted leg with one hand), one would never have guessed those knees were less than perfect.

When asked about her beauty secrets, Monica only laughs. It’s true that she sleeps as early as 8 p.m. most nights and still devours books, maintaining a healthy curiosity. The key, however, is attitude, she says.

“You can choose every morning, when you wake up, how you’re going to be for the rest of the day.  Early on, when I was 11 years old, for example, I already learned that going to school was a privilege. And I should not complain. There is no problem without a solution.”

Monica hopes to combine her experience as a corporate trainer and her yoga training to teach the subject full-time. Although she’s now settled in Manila, content to travel regularly to study at the Iyengar institute in Pune, India, every year, and to visit family in the US or friends in Europe, she’s not closing the door on where she may end up in the future.

“The universe will take care of me,” she says. And looking at this gorgeous lady, it seems to be doing a pretty good job.