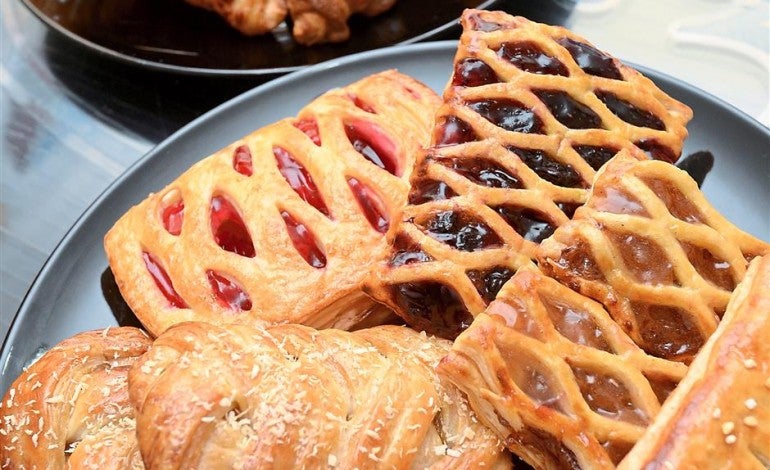 Palm oil is frequently incorporated into pastries to give them that crispiness and crunch, as well as to prolong their shelf life. The Star/Asia News Network

Palm oil has often received bad press due to its perceived cholesterol-raising effects. High cholesterol levels, as most people are aware, are a risk factor for heart disease.

Because of this, many health-conscious people try to avoid this vegetable cooking oil.

But what does the science say?

A study published last May in The Journal Of Nutrition was reported earlier this year as concluding that the elevated levels of low-density lipoprotein (LDL) cholesterol from eating palm oil translated into a 6 percent higher risk of coronary heart disease incidence and death.

The systemic review, conducted by researchers at the National University of Singapore’s (NUS) Saw Swee Hock School of Public Health, had pooled together and analyzed the results of 32 studies that had compared the effects of palm oil on blood lipid (i.e. fat) levels against those of other vegetable oils, both low-saturated and partially-hydrogenated, and animal fats, for at least two weeks.

It also found that palm oil increased HDL-cholesterol, or good cholesterol, in comparison to all the three other types of oil.

And contrary to the report earlier this year, the conclusion stated in the paper was that the increase in LDL-cholesterol by palm oil (in comparison to low-saturated vegetable oils) “may translate to” a 6 percent higher risk of coronary artery disease incidence and death.

The reason for this uncertainty on the part of the researchers is that while cholesterol is one of the important risk factors of heart disease, it does not directly cause heart disease.

In studies such as these – as opposed to observational studies that follow people to see what happens to them – cholesterol levels are surrogate markers for heart disease, says International Medical University nutrition and dietetics associate professor Dr. Tony Ng Kock Wai.

This means that as this study is specifically looking and comparing the effects of cooking oils on cholesterol alone, the linkage of palm oil to heart disease is an assumption made on what is known about the association between cholesterol and heart disease, which itself is still being researched.

Associate Professor Ng also offers another point to ponder: that of the ratio of total cholesterol to HDL-cholesterol.

While this study did not look for this ratio, it did find that palm oil actually increased HDL-cholesterol in general, compared to low-saturated vegetable oils, partially-hydrogenated vegetable oils and animal fats.

Ng says that the key is to keep to the recommended dietary guidelines of keeping fat consumption to less than 10 percent of total daily calorie intake.

He explains that as the main source of body cholesterol – about 1,000mg a day – is manufactured by the liver, dietary cholesterol need not be a worry unless it exceeds 400mg a day, and that cholesterol serves many essential bodily functions.

The popularity of palm oil

One of the reasons the NUS researchers did their study on palm oil is because it is one of the most consumed cooking oils in the world, particularly in Asia.

According to The Statistics Portal (www.statista.com), palm oil has held the top spot for global cooking oil consumption over the last two decades (the range of their available statistics).

In the period of 2014/15, palm oil formed 35 percent of global consumption, compared to soybean oil at second place with 27 percent.

The reason for this is both economic and culinary.

Economically speaking, palm oil is one of the cheapest oils on the market, making it the top choice for the food and beverage industry, from the roadside vendor frying banana fritters to the multinational company mass-producing chocolate for the world.

In addition, it has the highest reuse rate of all the vegetable cooking oils, with the exception of those that are partially-hydrogenated.

This is because palm oil, due to its saturated fats, is able to withstand the harsh conditions of deep frying that easily destabilise low-saturated cooking oils.

The high moisture content of deep frying in particular, encourages the breakdown of fatty acids during heating, resulting in a poor-quality oil that starts to break down at subsequently lower temperatures, and becomes progressively darker in colour, and more acrid in flavour and smell.

The more unsaturated the cooking oil, the more vulnerable it is to these changes, which accumulate the more times the oil is reused.

Under such heavy usage, saturated oils like palm oil are actually more stable and able to withstand such changes, allowing them to be reused more times.

This, of course, includes partially-hydrogenated vegetable oils, which have been specifically processed to become more stable.

However, the hydrogenation process also causes the creation of trans fats – a side effect harmful enough to human health that the United States Food and Drug Administration no longer recognises it as generally safe, and will require the usage of such oils to be subjected to strict pre-market regulation and approval after the three-year grace period starting last June.

Palm oil also helps provide certain desirable textural components to food products, e.g. the smooth and creamy texture and spreadability in margarine and chocolate spreads, and the crispiness in biscuits and pastries.

Because it is semi-solid at room temperature, unlike other vegetable oils, it can be used in products like margarine and shortening where more solid saturated fat is needed.

Its neutral taste and smell is also an advantage as it can be used in food products without affecting their taste or smell.

Because it is resistant to oxidation, palm oil also helps to extend the shelf life of food products that contain it, as well as help maintain their flavour and structure for a longer time.

All these functions were previously provided by partially-hydrogenated vegetable oils, but because of their unhealthy trans fat content, food manufacturers are replacing them mainly with palm oil.

Nutrition-wise, palm oil is also one of the most abundant natural sources of carotenes and tocotrienols (a form of vitamin E) – nutrients that still remain in the oil even after deep frying, albeit in lower concentrations.