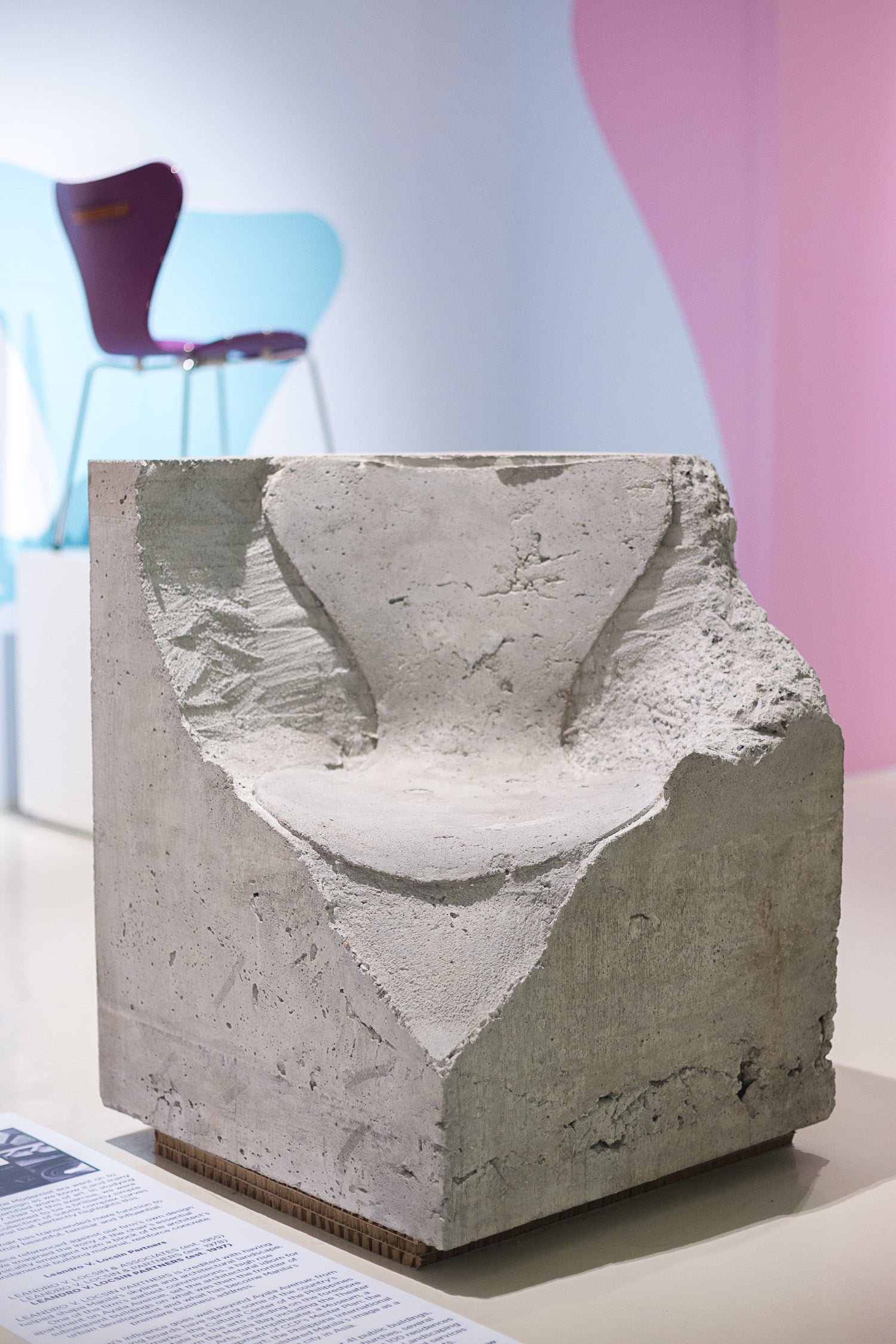 Leandro V. Locsin Partners' satirical take on the Series 7 focuses on the form over the materiality of the chair

Its sensuous, curvaceous form is easily recognizable—voluptuous top, tapering gently to a narrow waist, like an hourglass, perhaps inspired by a woman’s buxom physique, a popular silhouette in the 1950s.

That was the decade Danish architect and designer Arne Jacobsen first made the now-iconic Series 7 chair for Fritz Hansen, the storied Danish furniture company.

This effort was part of the celebration of the Series 7’s 60th anniversary in 2015. Fritz Hansen tapped seven “cool” architects including Zaha Hadid, Carlos Ott and Carlos Ponce de Leon, and Jun Igarashi.

In 1955, Jacobsen wanted to create a modern chair that was lightweight, compact, stackable and affordable, a follow-up to his elegant three-legged Ant chair made for a pharmaceutical factory in 1952.

But a scandal in British politics brought unlikely international renown to the Series 7 in the early 1960s, when a young model involved in a sexual affair with a high-ranking politician (the Profumo scandal) was photographed naked straddling a knock-off Series 7 chair.

Many celebrities would be photographed mimicking that provocative pose, some in authentic Series 7 chairs, like singer Tina Turner for an ad.

At Republic of Fritz Hansen, however, Series 7 is simply one of its most timeless pieces representative of classic Danish and Scandinavian design, as relevant and coveted today as it was nearly 61 years ago when it was first produced.

Today the chair’s look is unmistakable to design connoisseurs.

According to Dario Reicherl, the firm’s vice president for Asia-Pacific and Middle East, nearly 10 million copies of the Series 7 have been produced. It’s a sort of entry-level piece for furniture buyers wanting to get a first taste of Danish design.

“They all want the Egg,” Reicherl said, referring to a lounge chair also by Jacobsen, “but not everybody has 5,000 euros [its base price] right away. So they start with a Series 7.”

At Studio Dimensione, the Series 7 costs at least P40,000 and comes in various veneers, colors and finishes. It can also be upholstered in leather.

There are also two limited-edition versions—in masculine blue with powder-coated legs, and pink with gold legs—to mark its 60th anniversary.

Italian-born Reicherl said that in Southeast Asia, where he has lived since 2003, customers initially find the Series 7 too simple. But when they hear the story behind it and learn that it’s likened to a collectible Rolex, they buy their first piece, and later, a few more.

“This is how it usually starts,” he said. “You’re not instantly into Scandinavian design [because it’s] not in-your-face. It’s like a beautiful woman that you marry: It’s not instant ‘wow!’ She’s pretty, but you hear her talk and she’s very intelligent, very smart, very funny…”

The minimalist and simple forms of Scandinavian design can be a challenge to sell to countries that prefer ornate styles, like China, but Reicherl likened people’s buying attitudes to gaining culture and education, like a child in a boisterous kindergarten playground, then graduating to quietude and calm. As one’s tastes are honed, there grows the preference for timeless, non-trendy styles.

“Taste is a reflection of culture,” he said. “If everybody likes big logos, that’s because the culture likes big logos. A society has gained high culture when people start to buy what they like, not what the TV tells them to buy to be cool. Design is related to culture, not budget.”

From playful to satirical

The Filipino architects tapped by Studio Dimensione came up with varied nods to the Series 7, from playful to satirical.

The six local tributes will be included in Reicherl’s planned booklet to commemorate the 80-plus Series 7 redesign collaborations in the region, which he claimed may even be better than the ones produced by the seven cool designers in Europe.

The youngest in this bunch, Carlo Calma, deconstructed three Series 7 chairs in his favorite veneers—black elm, walnut and dark stained oak—to create layers of what he described as an artificial landscape, like a grotto, creating a 3D fantastical piece.

Time constraint prevented the London-trained architect to add his planned coffee table, lamp and WiFi to his elaborate piece.

José Pedro “Bong” Recio, principal of Rchitects Inc., married Danish styling and Filipino ingenuity by keeping the chair’s original form, but replaced its legs with twisted steel, after the Batibot chair, reminiscent of those found in postwar Filipino ancestral houses, or even provincial roadside eateries. It’s a combination of Filipino nostalgia and contemporary Danish design for a five-star setting.

Joey Yupangco, dean of De La Salle-College of Saint Benilde School of Design and Arts, refused to change anything structural with the iconic chair, and decided to slip on “leggings” of foam board onto the chromed legs. He said these are removable and can be changed according to season and occasion, much like fashion.

Instead, he chose to pay homage to the chair’s design process—the Series 7 is made of several layers of veneers
—by highlighting its shape and craftsmanship. He used the chair as a topographic surface to highlight the various veneers.

Gil Coscolluela, associate partner of W.V. Coscolluela and Associates, also chose to change nothing in the structure, but rather enhance the sensory experience for the chair, to elevate it from its regular stackable quality. The natural choice, he said, was leather, which caters to the sight, smell and touch.

Coscolluela clad his Series 7 with full-grain French calfskin, in purple for a pop of color, and “also because it connotes royalty,” he explained.

Leandro V. Locsin Partners—the eponymous firm founded by the National Artist behind many landmark projects, like the Cultural Center of the Philippines and the Philippine International Convention Center—took a satirical approach to its Series 7 design.

“We chose to have a little fun,” said Andy Locsin.

His team produced a concrete block, on which is stamped the voluptuous form of the Series 7.

“We imagined the irony of the chair’s essential tactile physicality emergent from a block of the architect’s most fundamental building material, reinforced concrete,” he explained.

The essence of the chair isn’t so much its materiality as its form, Locsin added. “We distilled the shape in the context of the history of our firm.”

Owing to its decades-long popularity, the Series 7 has spawned millions of replicas and knock-offs.

Like most designer furniture, each authentic Series 7 has a serial number that needs to be registered online upon purchase, for warranty of up to 20 years. Only Studio Dimensione is authorized to sell in the Philippines; parallel imports aren’t covered by the warranty. In Asia, where there are no design copyright laws, Reicherl said they’ve ceased worrying about fakes: “You would buy a fake if you don’t have much culture. Our target customers are those who will never buy a fake.”

The company wouldn’t create a product because market research says so, he added.

“It makes no sense to market differently,” said Reicherl, who joined the company in 2014, and is responsible for doubling the presence of the brand across the region in only two years. “You only do that because you want to sell more. We don’t worry of big sales. We do something because we like it. We don’t do this color because everyone is doing it. We represent a country. We represent Danish design. We’re a small company, but it’s a cultural thing. We don’t change our presentation and approach according to the market. It’s the opposite of fashion.”

He added: “Our philosophy is, go back to basics and let the sunshine in… Rediscover things that are real, things that aren’t done just for marketing, and finding, through this, happiness to life. If you follow trends, you lose yourself.”