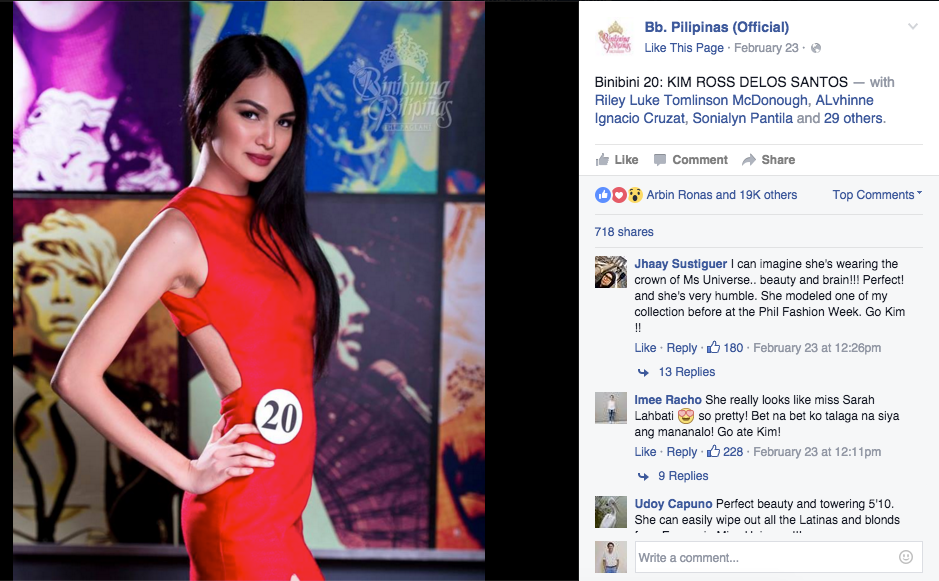 A contestant eyeing one of the five crowns in the Binibining Pilipinas 2016 beauty pageant has been disqualified from the competition supposedly over a racy test photo.

Gaffud, who also heads the Aces and Queens beauty queen camp which mentored Miss Universe 2015 Pia Wurtzbach, said that Delos Santos was deprived of due process when she was disqualified.

He said that the photo under scrutiny “did not come out in any publication and was supposed to be a high end fashion shoot by The Doc Marlon (Pecjo) who makes artwork not pornography.”

“It’s sad that today, the International Women’s Day, our candidate was disqualified because of her work as a model. A Filipina model photographed by the same photographer who worked with BPCI in the past, in an expressive work of art alongside with a respected male international supermodel. These works of art are not deemed pornographic. It saddens me that while we celebrate love and equality, the very organization that should uplift women denies them the chance to demonstrate empowerment,” Gaffud said in his Facebook page.

He accused the lawyers of the Binibining Pilipinas Charities Inc. (BPCI), the organization behind the prestigious beauty pageant, of not checking what the photo was about.

The 26-year-old Delos Santos, seen by beauty queen afficionados as a strong contender for a Binibini crown, is a professional model.

She won the title Elite Model Look in 2005 and placed second runner-up in Miss Aliwan Festival 2009.

A source from the BPCI who was not authorized to speak on the matter confirmed that Delos Santos was indeed disqualified.

The source said that the BPCI lawyers are still discussing the issue.

“Yes, it is true. But our legal department and BPCI are still having a meeting about it,” the source told INQUIRER.net on Wednesday.

The coronation night will be held at the Araneta Coliseum on April 17. AJH