Updated treatment provides ‘half a facelift without a facelift’ | Lifestyle.INQ ❮ ❯ 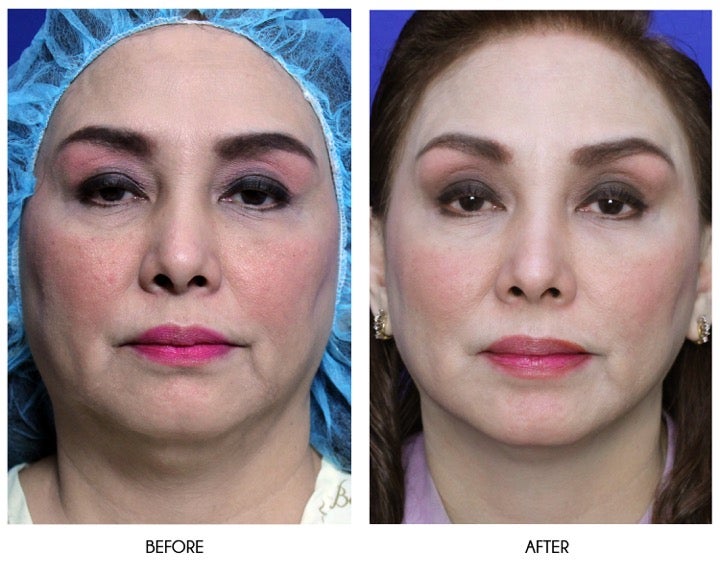 BEFORE and after photos of Filipino patient who underwent Thermilift

Updated treatment provides ‘half a facelift without a facelift’

A new form of nonsurgical facelift called Thermilift uses radio frequency or RF to penetrate and address different layers of the face such as the skin, fat and muscle, and thus reduce facial sagging and the appearance of wrinkles.

The procedure itself is not new. But before Thermilift’s introduction in the United States in 2012 by American plastic surgeon Brian Kinney and his collaborators, most RF machines worked only up to the skin.

Three years, 800 machines and 40,000 treatments later, Kinney visited the Philippines recently to introduce the latest version of Thermilift—an “injectable” RF that comes with a smart probe capable of emitting heat in various degrees, depending on the layer and area to be treated.

After gaining FDA approval in the United States and Europe, Thermilift is now used in more than 40 countries, including the Philippines.

The Belo Medical Group claims to be the first to have introduced the machine here.

The 45-minute lunchtime procedure is ideal for people who, because of health or personal reasons, are reluctant to undergo general anesthesia.

The probe inserted beneath the face secretes local anesthesia that doubles as conductor, which evenly spreads heat in the form of radio waves in the cheek, jaw and neck areas, said Kinney. Since it can also tighten the skin, Thermilift is also capable of producing a “Botox-like” effect on the face.

“We created the machines based on what a person’s tissues need,” he added. “Nerves need 85 degrees (Celsius) to disable them, fat needs 75 degrees to cause it to melt away lipids, and collagen needs 60 degrees to tighten them, and 47 degrees to stimulate an inflammatory response to grow new ones.”

Even the most advanced RF machines couldn’t do all these using the conventional approach, which was mostly skin-deep or superficial.

A trained doctor does a needle poke on the patient’s chin, cheeks and behind her ear before slipping in a soft, blunt probe. The pain is “far less than dental work,” said Kinney. Of the 500 patients he attended to, only one person took Tylenol to reduce the pain she felt.

“We don’t sedate, put people to sleep or strap them with an IV,” he said. “Instead, we do local infusion of liquid, which we heat and adjust carefully, depending on the tissues or areas to be tightened.”

According to one patient’s account, the heated liquid felt “like hot rocks used in a spa.” In other words, it doesn’t hurt, said Kinney.

During Thermilift’s recent launch in Makati, one of Dr. Vicki Belo’s first patients said she was able to go shopping right after the procedure. Since there’s swelling, another patient chose to stay indoors for three days before resuming regular activities.

Effects, which could last five years, can be seen as early as two weeks. On the sixth month, Thermilift’s effect is almost 90 percent, said Kinney. There’s no reason to redo a Thermilift, say, annually or even semi-annually.

“I’ve redone close to 400 people, but I haven’t redone a person who’s had Thermilift under six months because it offers a progressive tightening effect over time,” he said. “It continues to stimulate collagen production long after the actual procedure. You don’t want to disrupt that.”

“It can’t do an actual facelift,” the Los Angeles-based doctor said. “There are still some people who must resort to or could benefit more from surgery.”

A plastic surgeon, Kinney doesn’t see anything wrong if people resort to surgery. If done right, “good” surgery enhances a person’s looks. But it should be hardly noticeable.

What other people notice, he said, is bad surgery or the so-called wind tunnel effect. No one wants to be asked such questions as who did your face, have you had a facelift, or, worse, what have you done to your face.

“What you want to hear are comments like you look young, you look fresh, or questions like have you lost weight, have you been working out, are you in love,” he said. “You get those with Thermilift because it gives you half a facelift without a facelift.”