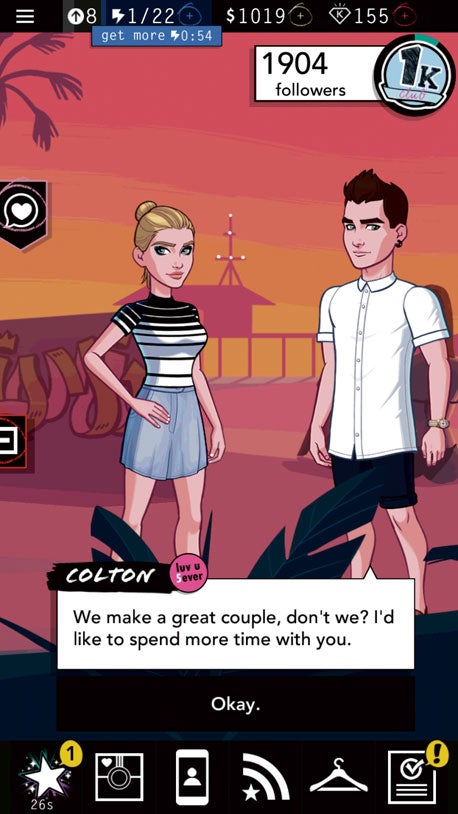 Hanging out (on an app) with Kendall and Kylie Jenner

Kendall and Kylie Jenner are this generation’s “It” girls.

The sisters—who have been gracing one magazine cover to another, shooting a fashion campaign, and creating a whole new line of clothing—are now revamping the makeup scene. Let’s not forget that they are among the most followed influencers on the Internet.

They’re turning out to be fashion and beauty moguls in their own right, and anything they come up with is bound to trend—and make them richer!

So, when they launched their new online game “Kendall & Kylie” last week, we were prepared to spend loads of time waiting to recharge so we could enter a virtual reality and feel like a long-lost Jenner sibling (not really, but close enough).

With the same app developer, Glu, the rudiments of the game are fairly similar to “Kim Kardashian Hollywood.” Although the goal of the game is also to become as popular as possible, it’s done on a completely different platform—the Internet.

It’s no secret that millennials—the same generation the Jenner sisters belong to—now use technology as their claim to fame by controlling and creating their own content like websites and video blogs (vlogs) and showing off their lifestyles on social media feeds, where good posts are eventually rewarded with the new social currency of likes and followers.

The game is pretty much patterned after what Kendall and Kylie offer in their personal apps that feature snippets of their daily lives, with all its life hacks, perks and drama.

You’ll get busy shooting vlogs and photo sets according to your character’s “passion,” although choices are limited to Kendall and Kylie’s interests, like fashion, beauty and media.

But Glu promises that the characters are not boxed in. Hopefully, the game would have more characterization options and corresponding subplots to make it more personalized and engaging.

The game’s plot revolves around you, a new persona who just moved to Sta. Monica and who immediately gets into a feud with a trust fund brat, Aubrey Maddison, who threatens to shut down the salon your character works in.

You would’ve figured out by now that Aubrey is this game’s version of Willow Pape, who turns out to be less annoying as she only trash-talks you through text messages and is less visible in the game.

The app’s integrated social feed also has no room for scandalous rumors (only selfies), so you can relax about Aubrey sabotaging your Internet stardom—well, at least, for now.

What makes Aubrey easier to hate is the fact that you’d want to steal her whole look—blonde soft waves, a statement hat and Christian Louboutin-inspired booties that scream “music festival outfit!”

You’ll also meet the game’s version of Simon and Maria through the characters of Perry and Emily. They’ll be the ones who update you about project prospects and news about Aubrey. They are also in charge of setting the goals you have to achieve, while Kendall and Kylie occasionally drop messages about events and gigs that they want you to tag along to.

Unfortunately, this game still has a lot of bugs to fix.

As much as you’d want to start on projects, shoot vlogs and hang out with the Jenners, sometimes you have no choice but to gain milestone follower counts only by dating.

You will get notified about shoots, gigs and events only through texts from Perry, but for a lot of game users, Perry seems to be a no-show.

The bugs make the Kendall and Kylie game seem slow-paced, as the character played gets busy only by loading up on dates to have viral selfies posted after. This glitch certainly makes some of its players frustrated and bored.

If you’re one of the damned, you’d feel lost playing the game, as nothing seems to be happening each day you check in.

Some users also have difficulty with the game loading or hanging, and rebooting or uninstalling the app won’t do the trick—it’s the game, not your phone.

However, it seems like the developers anticipated this mishap. If you ever feel the need to wait for a better app update, you don’t have to worry about starting from square one, since you can load saved games using your Facebook, Google Play or Game Center accounts.

But, before you uninstall the app, make sure you appreciate the game’s wardrobe, with familiar clothes from Kendall and Kylie’s Topshop, Mango and even Balmain campaigns can be worn.

Plus, would you pass up the chance to don the famous but elusive Kylie lip kits?