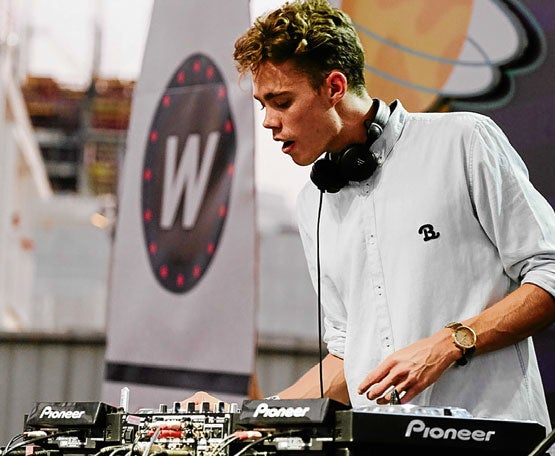 The best thing about music festivals is that even if you’re paying to see only one or two bands, there’s a lot more. And what’s better than half a day of live music?

For its fourth installment, Karpos Multimedia’s space-themed Wanderland Music and Arts Festival brought in the big guns for its lineup, with American indie bigwigs Bon Iver and Death Cab for Cutie as co-headliners.

But they were not the only crowd-drawers, as evidenced by the excellent turnout from the moment the gates opened at noon.

Despite the scorching midday heat, determined early birds started flocking towards the stage to listen to the easy-breezy indie-rock beats of the first few bands: local up-and-comers Oh, Flamingo!, Jensen and the Flips, and recent Laneway Festival Singapore performers, Cheats.

There were also plenty of things to keep people occupied in between daytime sets, like spray-painting at the Art Zone or hunting for freebies such as posters, plush toys and meet-and-greet passes hidden within the event grounds.

It was nice to see a Wanderland alum coming back for some more Filipino love. Formerly of Aussie pop duo Colour Coding from the first Wanderland fest in 2013, Tim Commandeur regaled this year’s batch of Wanderers with his ambient electronic beats not just once, but twice.

He joined vocalist Jarrah McCleary on the main stage as electropop outfit Panama (“Always,” “It’s Not Over”), then hopped onto the Globe stage to spin his tracks like “Wasted” for the late-afternoon crowd.

After another Australian act, lo-fi garage rock outfit San Cisco, dished out earworm tunes like “Awkward” and “Fred Astaire,” and frequent collaborators crwn and Jess Connelly brought the sunset grooves with sultry tracks like “Under Blankets.”

By nightfall, the venue was fully packed as Kiwi indietronica band The Naked and Famous had everyone on their feet and singing along to youth anthems like “Young Blood” and “Punching in a Dream.”

As thoroughly warmed up as the crowd was by the previous bands, nothing and no one could have prepared us for Bon Iver’s utterly mesmerizing set.

Vernon and The Staves’ haunting harmonies shone through in crowd favorites like “Holocene” and “Michicant” from the Grammy award-winning second album “Bon Iver, Bon Iver,” and “Roslyn, WA” from the “Twilight Saga” soundtrack.

Arguably the ultimate jawdropper of the night, Vernon’s a cappella track “Woods” was a gloriously distorted mix of tranquil harmonies, deep runs and frantic howls, which he effortlessly created on the spot with a loop machine.

For the folksy, bittersweet acoustic track “Skinny Love,” Vernon sang with such raw emotion that he could practically wring tears from a rock.

By the time Bon Iver wrapped up its 13-song set with the heartrending two-part opus “The Wolves” from the melancholy debut album “For Emma, Forever Ago,” people were scrambling to find somebody to hug.

“Can somebody help me carry all these feels?” one concertgoer feebly said to no one in particular. We felt the exact same way.

The crowd had barely recovered from the sheer awesomeness of Bon Iver’s emotional assault when the final headliner clambered onstage.

To the delight of those who had missed Death Cab for Cutie’s sold-out show in 2012, the band returned exactly four years later, armed with a new album entitled “Kintsugi” and a couple of dramatic surprises up its sleeve.

Bon Iver may have been a pretty tough act to follow, but Death Cab for Cutie certainly held up its own with a tried-and-tested formula of indie rock. Ben Gibbard and Co. (minus longtime producer Chris Walla, who had parted ways with the band in 2014) took the crowd on a nostalgic ride down the band’s robust 19-year repertoire; old favorites were interspersed with several tracks off “Kintsugi,” such as the first single “Black Sun” and the aptly titled “Little Wanderer.”

“Who remembers the ’90s?” Gibbard asked the crowd, before playing “President of What?” from one of the band’s earlier records. Not very many, we presume, having wryly observed that a good number of Wanderland attendees were most likely born that decade.

Nevertheless, the self-professed titos and titas in the audience sang unabashedly along with the younger fans to hits “Soul Meets Body” and a stripped-down solo of “I Will Follow You into the Dark,” from the platinum-selling 2005 major-label debut “Plans”; “I Will Possess Your Heart,” from the dark, gritty 2008 album “Narrow Stairs”; and “You Are a Tourist,” from 2011’s “Codes and Keys.”

Gibbard gave a shout-out to Bon Iver and dedicated the track “Cath…” to the band.

The frontman appeared to have been experiencing equipment issues throughout Death Cab’s set, such that in the middle of “Cath…,” Gibbard hurled the mic stand across the stage, sat down for some facetime with fans, and recorded himself with a couple of smartphones from the lucky ones in front.

We could only imagine his frustration, but for the people who were oblivious to the onstage drama, the band sounded as flawless as it did on record.

Of course, there was no finale more fitting or evocative than the sweeping tearjerker track “Transatlanticism,” with Gibbard’s plaintive vocals repeating “I need you so much closer” until the band broke into a loud, cathartic release amid a shower of confetti.

Given the stellar lineup, it was really no surprise that this year’s Wanderland edition had an overwhelming turnout—and good as well as not-so-good consequences. Many complained about the long lines for RFID load, food and drinks, and also the shortage of bottled water, which was a major concern especially for those who were already at the venue since midday.

But, logistical blips aside, this music fest gave its concertgoers exactly what they came for, and more.

Thanks to a carefully curated roster of artists, a crystal-clear sound system and mercifully good weather, Wanderland was a welcome escape from everyday stress—providing a steady, chill-out kind of vibe that was a nice departure from the usual high-energy screamfests.

All in all, it made for a concert experience that was truly out of this world.