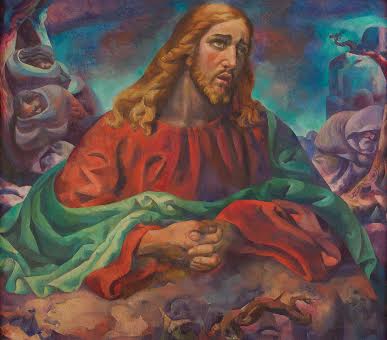 The catalogues had already been printed and the invitations sent out. But days before the auction of Philippine art at Salcedo Auctions, curator Ramon E.S. Lerma received a totally unexpected call from journalist and author Caroline Kennedy, the former wife of National Artist Benedicto “BenCab” Cabrera.

“She rang us to ask if we wanted to include seven pieces by BenCab that he had created in London where they lived after getting married in 1969,” Lerma told Inquirer Lifestyle. “Of course we agreed because these were some of his earliest works. We got the call on a Monday, Caroline delivered the pieces on Tuesday, and we had them framed on Wednesday. She will be present at the auction on Saturday.”

This is the first time Kennedy has put up her BenCabs for auction in the Philippines. “She put two pieces up for auction in Hong Kong several years ago,” Lerma noted.

The seven pieces are remarkable for their intricacy and attention to detail. Three of them capture the heft and weight of draped cloth.

The most striking of the lot is “Draped Figure,” a mixed-media piece BenCab made in 1971 that shows a seated figure covered loosely with what looks like a burial shroud.

While in London, BenCab was attracted to the Old Master paintings he had previously seen only in books and reproductions. “Goya and El Greco became particular favorites of his,” Kennedy wrote in her notes for the collection.

“He loved El Greco’s elongated figures, often swathed in lush drapery, and admired the contrast in light and shadow that gave an overall haunting and somber quality to the paintings.”

Taking inspiration from these works, BenCab created a series of drapes in sepia and black crayon with some finer detail in pen and ink.

Once completed, it was exhibited privately in London in 1972 at the Chelsea home of Princess Elizabeth of Yugoslavia.

Jaime Zobel de Ayala, then Ambassador to the Court of St. James and a friend and major collector of BenCab’s early works, delivered the opening remarks.

Two of the pieces from that exhibition and the small print which the artist did later in 1975, are also part of this auction and were Kennedy’s favorites.

Lerma was quick to add, however, that while it was “a tremendous honor” for Salcedo Auctions to be approached by Kennedy with the BenCab collection, the over 120 Philippine art pieces also up for auction are just as important.

“We have works by Ang Kiukok, Malang, Galo Ocampo, HR Ocampo and a very rare Botong,” he said.

Carlos “Botong” Francisco’s commissioned work, “Gethsemane,” is a close-up interpretation of Christ’s face during the “Agony in the Garden.” The painting, completed in 1958, bears Botong’s signature on the front and at the back.

The frame, which features symbolic elements of the Passion, such as the crown of thorns and the whip used to flagellate Christ, was carved by Botong himself, Lerma said.

Contemporary art is represented with a large-scale piece by Geraldine Javier, “Blood Type C (Catholic), Major Major G (Guilt).” The triptych shows two figures flanking a white dress topped with a dove. They are linked by a length of red tatting lace. It is described as “a commentary on the inherent connection of sacrifice and repentance within the Catholic religion.”

At 2 p.m. on Sunday, March 13, there will be an auction of fine jewelry and timepieces, including several Patek Philippes and Rolexes.