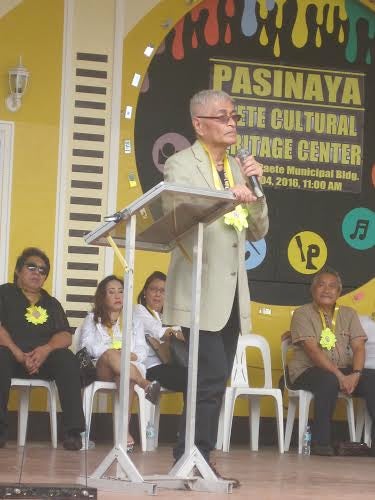 The little town of Paete in Laguna, along Laguna de Bay, lies in the shadows of the Sierra Madre mountains with its three crosses on the summit. It is known for its centuries-old St. James the Great Church, traditional sculptures, wood carvings, Last Suppers (“Rush Suppers” when the buyer is in a hurry), visual artists led by the Baldemor family, and writers.

Chief among them is Frank G. Rivera—playwright, director, actor, poet, lyricist and songwriter, and cancer survivor who attributes his cure to a “miracle.”

The dramatist was honored recently by his hometown with a grand hall named after him, a museum and a library.

The small museum is dedicated to local heroes. The mini-library contains Rivera’s collection of books and the art gallery showcases some paintings, including works by the writer-director himself.

For Rivera, it began in 1976 with Philippine Educational Theater Association (Peta),  with the country still in the grip of martial law, when he was invited by Mindanao State University (MSU) in Marawi City to put up a workshop there. He found theater in the Muslim enclave to be alive, exciting. The Parliament of the Streets staged plays denouncing martial law, and the activists led by Karl Gaspar dispersed as the police pounced on them.

In one church, actors dramatized scenes from the Gospels as the priest, Fr. Rodolfo Galenzoga, celebrated Mass. And, as in Manila, there were productions of “Jesus Christ Superstar,” “The Sound of Music” and other Broadway hits.

Rivera did not come for the latter kind of theater, so after the workshop he founded a theater company called Sining Kambayoka; the project turned out to be his crowning achievement.

“Bayok,” a Maranao word, is a form of traditional theater in which there are two singing versifiers. Rivera was excited by this kind of theater, but instead of two versifiers who were singing, chanting and telling a story, he added in his subsequent plays more characters, a chorus of men and women. If the poets sang of a rock, actors emerge to symbolize the rocks. If they sang of a flower, pretty young women materialized to become princesses.

The first play he wrote under this refashioning of tradition was “Mga Kuwentong Maranao,” which became a long-running production.

There were many Maranao folk tales about Pilandok, a young folk hero who was something of a Juan Tamad, also very mischievous. He enjoyed fooling people, putting one over them. The playwright from Manila found this a negative portrayal and, over the objections of the Maranao purists who adhered to tradition, he recast Pilandok. In the middle of the story, the character begins to change, begins to work for a better world.

“I think it is the role of theater, of every artist to change ideas, to change points of views, to make a paradigm shift,” says Rivera.

And thus “Mga Kuwentong Maranao” became a hit, and after four decades is still being staged every now and then in campuses and communities in Mindanao.

Another major production was “Halik sa Kampilan,” stylized and very effective. It was inspired by a Malou Jacob play for Peta, with Rivera changing the scenes and the conflict, adding new characters and creating new villains. In songs, dances, chants and action, “Halik sa Kampilan” dramatized the struggles of Muslims against land-grabbers who set up factories in their ancestral domain.

The prophetic “Ambon, Ulan, Baha” is one of the most often staged Rivera plays, almost foretelling the tsunami tragedy which struck Ormoc City, Leyte, years later. Written at a time when being an environmentalist was not yet fashionable, the contemporary sarswela told of a love story in a community that was threatened and eventually destroyed by floods following the rape of the forest.

The original members of Sining Kambayoka later fanned out in Mindanao and formed their own little theater groups. Thus, the influence of the company spread, while the original MSU-based Sining Kambayoka is still very much around. The president is Sonny Noel, with Pepito Sumayan as artistic director.

“They have their own version of my original plays,” says Rivera. “When  I saw their ‘Mga Kwentong Maranao,’ Pilandok’s flying carpet scene, what with the new technology, was really flying. And this new version was much better than my original play. Nakakatuwa.”

Rivera has written many other plays, and claims he has lost count. These—plus his stream of text poems (“Textula”), work as a director, librettist and songwriter (he learned basic music from the Maryknoll fathers in a Paete high school and laughingly calls himself a “Maryknoller”), constitute an impressive body of work.

So it’s not surprising that his hometown has seen fit to honor him with a permanent Bulwagan which may be added to the tourist attractions of the cultural cradle that is Paete, “the carving town.”