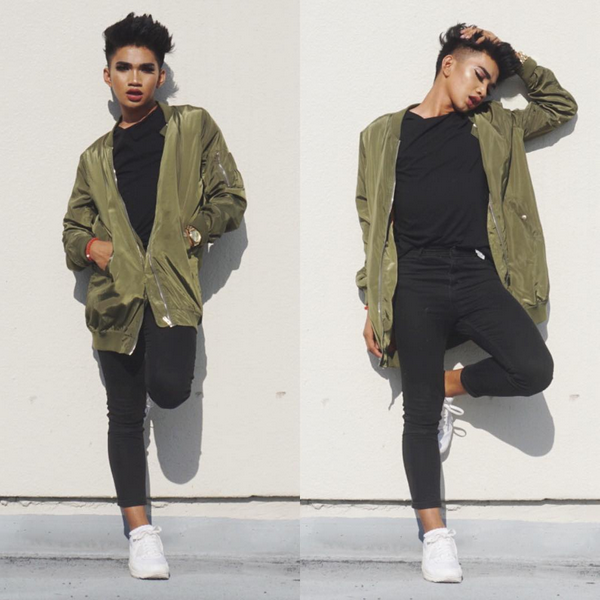 After stints on television and a meet-and-greet in Cebu since arriving in the country on Feb. 29, it was time for the Ilocano-speaking “boy wearing makeup” to meet some 500 fans.

The event, hosted by one of the cosmetic brands he prefers using most, gathered teens and mothers, who screamed excitedly with every wave of the Hawaii-based sensation.

“Oh my goodness, I was never treated like this before,” he said of the huge fan base he has in the Philippines, which he left when he was only 7.

“I feel like I’m best friends with everyone,” he told the Inquirer.

Bretman Rock rose to fame thanks to his no-holds-barred posts on social media, especially his vlogs and make-up tutorials combined with brutal honesty and feisty comments.

That’s far from what his relatives in Cagayan province could have expected of him when he migrated to the United States, or when he went home in his fourth grade to attend a brother’s wedding, his only visit to the country before this one.

It also wasn’t anything Bretman expected, he admitted.

It was actually a fast ascent, the 17-year-old recalls of those figures. “I just got into makeup, a little bit less than a year, nine months ago.”

He isn’t even good at drawing but he must be a natural, having mastered makeup only through watching YouTube videos, he noted.

“[Me mastering makeup] kind of happened by accident,” he added.

He could call it anything he wanted, but it proved to be his best weapon on the Web. Within a few months in 2015, his numbers grew exponentially. On Instagram alone, he went from a few hundred-thousands to millions.

Now, his videos—from his makeup tutorials, rants, replies to haters, to posts of him helping his little sister out, attempts at mimicking his Ilocano mother or just filming her—garner hundreds of thousands of likes on Instagram.

The videos on YouTube and Facebook can reach millions in views. Even his tweets get retweeted as many times as any celebrity.

But, a careless star he is not. He does not consider his celebrity a career, because he enjoys it too much and it can easily slip away.

He also still studies (and does well in school), and chooses the brands to endorse carefully—among them Benefit, which he uses, especially to improve his eyebrows.

If it bugs you what you see in some videos—his mom being hot-headed, Bretman hurting his sister—here is his answer: “I like to think of it more of like an alter-ego, not really the person that I am.”

What he shows in his online videos sometimes can happen in real life, he said, but the real-life Bretman Rock is, well, “calmer.”

To see more photos of the event, check out the hashtags #BenefitLovesBretman and #BretmanBackHome on Instagram.

For more of the interview (some parts of which are in Ilocano), watch out for the next issue of Inquirer Super.