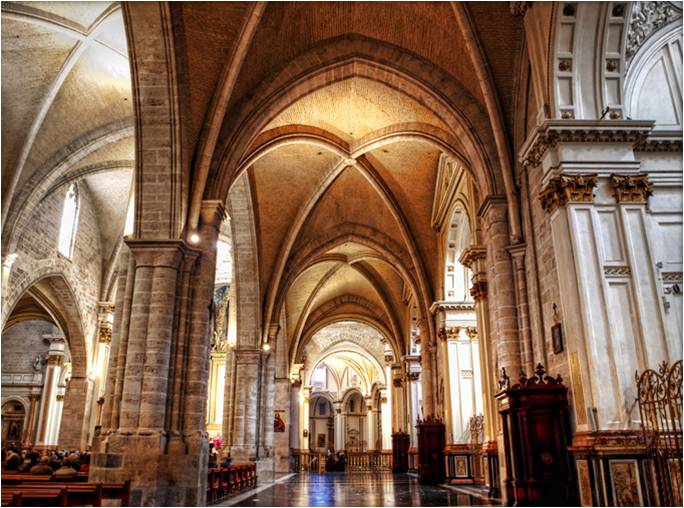 BREATHTAKING view of the interior of Valencia Cathedral

UNKNOWN to many, one of Christendom’s most sought-after relics, the original chalice used by Jesus Christ during the Last Supper, is kept and worshipped for centuries among the church’s treasures at the Valencia Cathedral.

The relic can be seen in a bullet-proof glass reliquary in the illuminated shrine on the high altar on a side corner of the chapel, where it attracts pilgrimage.

Three-hundred-fifty-one kilometers from the capital of Spain is the medieval city of Valencia, the third greatest and most populous city of Spain, next to Madrid and Barcelona.

Rivaling the two cities in importance and interest, Valencia owes much of its charm to its rich country culture—a subtle blending of history and tradition of people and architecture. It is a city of contrast that offers the visitors a myriad of wonders which are difficult to see and get to know well in only one day.

It was in this charming city where   a group of Filipino scholars and this writer, studying in Madrid, spent their Holy Week to observe the local customs and traditions and the manner in which the residents celebrated Semana Santa and the Fallas Festival of Valencia.

We arrived in the city in time for Fallas Festival de Valencia, one of the most outstanding fire fiestas in the world, declared by the United Nations Educational, Scientific and Cultural Organization (Unesco) in 1965 as Fiesta of International Tourist Interest in Spain, and a candidate to be named an Intangible Cultural Heritage.

To give us the opportunity to experience and get a realistic impression of what it was to live in a medieval city, we explored Valencia’s history by joining walking tours to religious sites and historical landmarks.

Valencia is a living museum that must be seen on foot. Along the sidewalks are cafés and restaurants where sipping coffee all afternoon is considered an art.

As we continued to wander around the narrow winding cobblestone streets, we had glimpses of romantic courtyards and fountains, charming patios, ruins of grand mosques and temples, picturesque parks and squares, redolent of a glorious era gone by. They were preserved and had endured for centuries as examples of timeless beauty.

For tourists to know more about the different varieties of paellas and Spanish wines, a tour of restaurants and bars in the neighborhood by the sea, should be an integral part of any visit to Valencia. At a nearby hotel, we had our first taste of paella Valenciana and cerveza de Valencia.

The walking tour ended at the cathedral of Valencia, considered “an authentic jewel and definitely a sparkling gem among the many treasures of Spain.”

The interior is truly amazing and awe-inspiring, a must-see in Valencia. For us Filipinos, celebrating the Holy Week in Valencia and the discovery of Christ’s chalice proved an exhilarating and memorable experience!

The city was occupied by the Iberians, Moors, Goths, and Romans, all of whom left their indelible marks and enriched the city. Hardly surprising that Valencia has much to offer in the way of historic landmarks, and its individual personality and splendid location, the Mediterranean coast.

The Spaniards’ passionate love of life, their strong religious fervor, their devotion to religious rites, their sense of the tragic and the mystical, are closely bound up with the living past. It is this that constitutes the unique charm and fascination of Spain.

Visitors emerging from Valencia’s central station would immediately notice that the city has a strange medieval air and reeks with the same atmosphere that would make all other towns in Castilla la Vieja (old Castille) unique in the world. Even the scenery would be timeless, magical and eternal.

The capital is also the scene of the storied exploits of El Cid (The Lord)—Rodrigo Diaz de Vivar, the legendary 11th-century   Spanish warrior   “whose remarkable military ability in the conquest of Valencia made him a folk hero of mythical proportions.”

Called El Cid by the Moors and El Campeador (the Outstanding Champion) by his countrymen, he became the character immortalized in many legends, stories and poems, including “El Cantar de mío Cid (The Song of the Cid),” a 12th-century epic poem.

The old romantic castles and the towers, mighty strongholds used by El Cid in defending Valencia from the Moors are still on the hills of the countryside. They are gorgeous and awe-inspiring sceneries to behold and photograph.

Other historical landmarks are the impressive Roman aqueducts and Teatro Romano (Roman Theater), which stand today as monuments to Roman grandeur.

Although the majesty and pomp that once made the city one of Spain’s greatest centers have been obliterated by time, traces remain in its decaying temples, churches, ruins of palaces, cobblestone alleys, romantic patios, courtyards exuding fantasy and history.

The part of the city that, undoubtedly, attracts most foreign visitors and pilgrims is the magnificent cathedral—a harmonious ensemble of Gothic, Renaissance, Baroque and Neo-Classical elements.

Every day there is a crowd of visitors who trek the labyrinthine alley leading to the imposing edifice to visit this precious jewel that represents one of Spain’s monumental arts.

However, only a few people are aware that in the cathedral of Valencia the original chalice used by Jesus Christ during the Last Supper has been preserved through the centuries.

In the main chapel, a precious reliquary, wrought in gold and precious stones, contains the chalice which pious tradition identifies with Palestine in the lifetime of the Savior.

I had the good fortune to have a close look at the Holy Chalice from the Last Supper which gave me the feelings of admiration and indescribable joy. It is every person’s ultimate dream to have a glimpse of this priceless   gem, so it was providential that I found myself before the relic among pilgrims and visitors throughout the world.

This writer was in awe and captivated by the beauty of the relic. The memory would remain deeply etched in my mind and heart. It was a most emotional and memorable experience that would last a lifetime.

The hemispherical cup, without the base, is about 3.5 inches in diameter. The total height, including the base is about 7 inches. It is made of agate in Corinthian design. The pearls (28, the size of a pea), rubies and emeralds, were added later.

The chalice, which is the cup made of dark brown agate and finely polished is the only one was considered a relic. The handles, we were informed, were added later, as well as the chalice’s stem made of exquisitely engraved gold.

Ramon M. Roda is a retired professor of Spanish and Rizal Course at the College of Commerce and Business Administration of the University of Santo Tomas and a recipient of two study-travel grants from the Spanish government for postgraduate studies in Madrid and Santander, Spain.