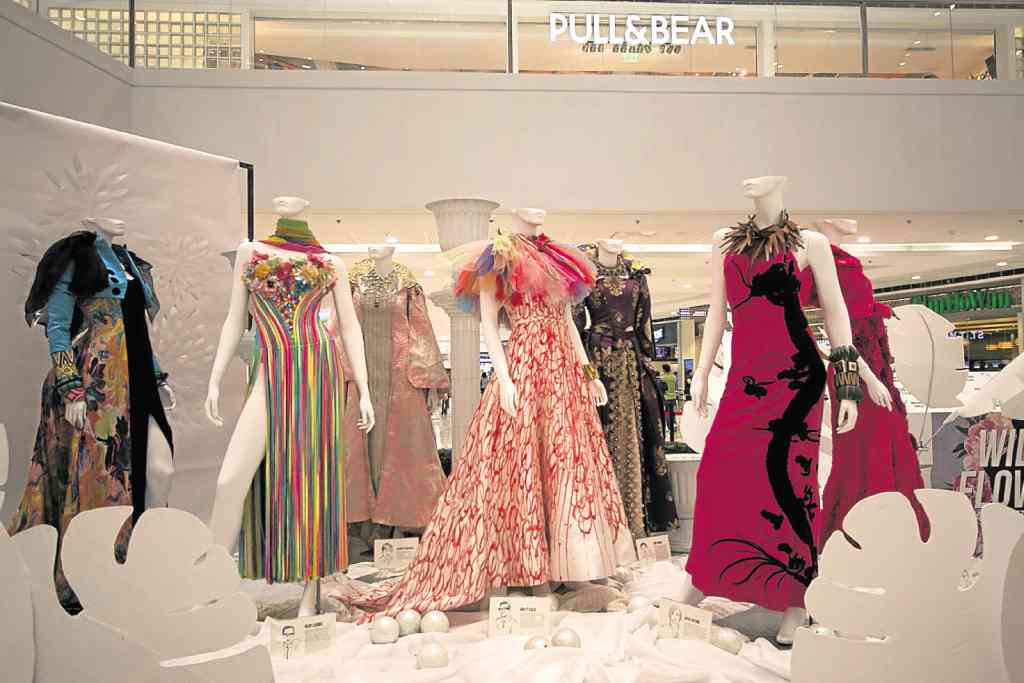 WHEN a client’s brief reads something like this: “You can make the dress as heavy as you want. I don’t even need to pee! I don’t have to wear it in the car; I can change in the venue. Just make me larger than life,” it sure sounds like a creative dream come true for any fashion designer.

To have that much artistic freedom—the leeway to experiment, to push the boundaries of wearable design for a high-profile client—is a rare opportunity only those who have had a chance to make a custom dress for Tessa Prieto-Valdes might understand.

Some 30 pieces of evidence of these sartorial fantasies-come-true are on display until March 18 at the Mega Fashion Hall in SM Megamall, as part of the celebrations marking the 30th year of SM Supermalls, and Women’s Month.

Titled “Wild Flower: A Fashion Retrospective,” it’s a showcase not just of this wild-child Barbie’s aureate, over-the-top style, but also of the Filipino talent, of which 22 prominent and emerging names in the industry, from Luzon to Mindanao, are represented.

The 30-piece all-gowns exhibit is a very slim representation of Prieto-Valdes’ massive “dungeon” (her word) of a wardrobe, and was curated by the SM team with her sister-in-law, Inquirer Preen editor Ria Prieto. Half of the pieces they mined from Prieto-Valdes’ bodega at home, even she hasn’t seen in a long time.

The gowns consist of what she describes, tongue-in-cheek, on her Instagram as “simple” and “casual Friday” pieces. There’s a beaded black strapless number by Inno Sotto that even Prieto-Valdes’ husband Dennis captioned on his Instagram: “My wife wore this?!? Impossible! Walang colors?!?”

Anyone familiar with this flamboyant character might react just as incredulously. The Sotto dress is, in fact, grouped with other neutral-colored dresses by the likes of Lesley Mobo, Monique Lhuillier, Ivarluski Aseron—famous names one won’t typically associate with Prieto-Valdes.

Granting the dresses are all ornamented and have plenty of texture, they’re all done tone-on-tone. In another section, there’s even a tailored Gian Romano pantsuit in—gasp!—unadorned cream fabric!

But if one really knows this fashion icon, they’ll also know that the final look doesn’t depend on the dress alone. She’ll likely style it with a towering hat, perhaps top it with an elaborate cape and an ornate necklace and a stack of bracelets… We could go on and on.

The more “regular” dresses share the spotlight with cloaked styles by Albert Andrada (for her “Game of Thrones”-theme wedding anniversary), a hand-painted Jojie Lloren (from his Red Charity Gala collection, of which Prieto-Valdes is co-producer), and an Elizabethan dress by Eric Pineda (which she wore to the reality TV show “Celebrity Duets”).

There’s also a high-slit dress made of multicolor neon strips by good friend Rajo Laurel that was made for Prieto-Valdes’ 50th birthday two years ago, that she hasn’t worn yet; she got cowed by its very high slit.

“My only condition when I have a dress made is that, nothing too bomba,” she says with a laugh.

Some dresses on display, she hasn’t worn yet, including the Romano suit. There’s also the sculptural cerulean, basket-weave-like number by Francis Libiran, a butterfly-printed ball gown by Maureen Disini, and an all-white tulle number by Dennis Lustico.

There are also a piece each by Sulu-born designer Amir Salim Ali, and the pride of Cebu, Jun Escario, Ronald Enrico and Philipp Tampus. The latter she has met only once, but has been a regular supplier of gowns.

A night owl, Prieto-Valdes trawls the Internet for emerging local talents. She has become a patron of some fashion students of Slim’s Fashion and Arts School.

“I don’t really mind if it has been worn by someone else on the runway or in a pictorial,” she says. “I’ll buy it if I really like it. I’ll wear it differently, anyway.”

Trim and fit, she easily fits into sample sizes, with minimal adjustments to her petite frame. She avoids buying off-the-rack because if she has the hem lopped off to fit her height, “you’ll have more than enough for a scarf.”

Prieto-Valdes’ regular designers just know what she likes, such that she doesn’t need to fit the dress. Tampus—who did the “GoT”-like dragon dress with exquisite 3D reptilian beadwork on the bodice, and styled with leather wings by another designer—simply talks to his client over the phone, and sends the dresses via cargo. They always fit her perfectly.

Current favorite and go-to designer Cherry Veric has several dresses on show, including a short sheer dress with strategically placed yellow-gold appliqués, and an all-red number with a beaded diaphanous overlay.

His client explains their relationship: “I’m short, I like volume, and he gets it.”

Dubai-based and/or -trained designers Michael Cinco, Ezra Santos, Cary Santiago and Rocky Gathercole also have a dress each on display.

Gathercole, who has gained attention from dressing up the likes of Lady Gaga, Britney Spears and Paris Hilton, takes a place of honor in the exhibit, with his architectural metallic-gold foil dress hanging from the ceiling. It’s Prieto-Valdes’ personal favorite in the selection.

The Inquirer Lifestyle columnist, also known as Sea Princess, doesn’t catalog her wardrobe, and rues that some of the pieces she would’ve wanted in the exhibit are unaccounted for, like her English medieval-theme wedding dress by Inno Sotto and a Ramon Valera dress handed down to her by her mom, Inquirer chair Marixi Prieto.

She fears that some of the dresses have unintentionally been sent to charity or garage sales.

She has had suggestions for a bigger-scale exhibit, and even a book compiling the dresses in her collection, which is essentially a celebration of Filipino talent and limitless creativity. She’s carefully considering these. She also likes the idea of a doll that can be dressed up à la Tessa.

“I don’t know if my daughters would want to inherit them, especially Annika, who’s shy and my exact opposite,” she says. “Maybe Athena might want to have the accessories… But these are masterpieces and timeless dresses. I will never knowingly part with them. They’ll never be part of a garage sale ever.”