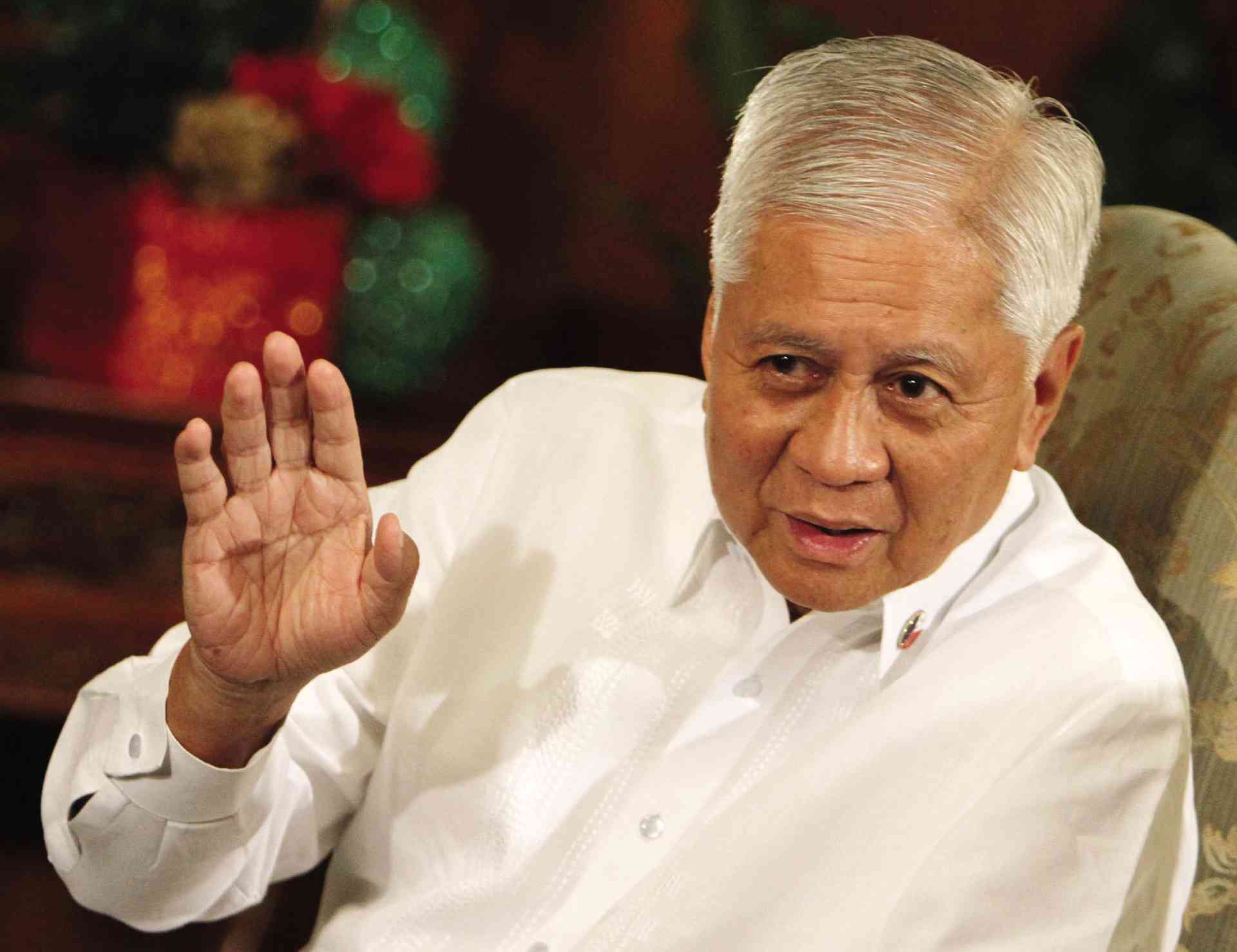 (Editor’s note: This letter was written by Cabinet Secretary Rene Almendras on Feb. 26, shortly after the retirement of Foreign Secretary Albert del Rosario was announced. It was shared with some Foreign Affairs officials from whom we sourced this letter. We’re reprinting this with Secretary Almendras’ permission. It gives us a glimpse into the character of a diplomat and a good public servant.)

The last time I publicly honored a fellow Cabinet member was at the wake of Secretary Jesse Robredo where I explained his “Tsinelas Leadership” style. I did that for no other reason than to honor a colleague but more than that, a friend.

Many years ago I was taught that you need not wait for a person to move on to honor him, so for lack of a venue and before you leave the OFA on March 7, allow me through this letter to do just that, “honor a most respected colleague and a friend.”

I know I already mentioned to you that my wife Marides always makes fun of me because she would always know if it is you I am talking to on the phone because I literally stand at attention while doing so, and very poised in the conversation. Something we both always laugh at, but this demonstrates the effect you have on me.

Even if we are not physically in the same room, your virtual presence elicits an automatic reverence on my part. Proof of my first point, it is an honor and privilege for me to have served in the same Cabinet with you and with the stature you carry.

Allow me to narrate some very memorable experiences that have formed my posture in your presence.

We have shared many good and extremely difficult times but I hope you don’t mind that I just mention those that will support your distinguished qualities which I want to highlight.

I am not sure if you know that even the President would make sure we pace our movements when you are with us. Forgive us for rushing to the next venue or to the cars and vans after meetings, but nevertheless you always kept your cool and your calculated demeanor has gotten us out of difficult situations.

Remember that very embarrassing moment at the World Economic Forum (WEF) in Davos when the van would not start and we were blocking the driveway, as the WEF Chair waited in his car for us to get out of the way?

There was panic and commotion in the van with every “brilliant” Cabinet member suggesting to the driver to do this or that.

It was pandemonium until in a louder voice than normal you said, “Gentlemen can we please keep quiet so the driver can do what he needs to do.”  There was immediate silence and driver was able to sort things out and started the van.

We were laughing hysterically after realizing the poor driver’s situation of having every Cabinet member tell him what to do.  You were in your most natural state—a strategic perspective, a steady hand and a paced implementer.

Being the foreign secretary, you were provided a separate car by the host country, while the rest of us would take a van. We always appreciated your humility in choosing to take the van with us, especially in Vladivostok where we were using the extremely unusual rocket ship-inspired van. We all laughed so hard after we had to convince Russian Security that you were our Minister of Foreign Affairs riding such a funny-looking vehicle.

When I was tasked to address the Balingtan Channel issue, your wisdom and vast experience were such a great help. The eight months of negotiations with the Hong Kong government about the Quirino Grandstand incident was probably the most difficult negotiating challenge in my lifetime, and your support was so crucial.

I hope you remembered the time I called you to explain a difficult position I wanted to take.  After having studied our options for over a week I was left with very little room but realized I had to take a stand. After explaining this to you, you replied, “Mr. Secretary you are the lead and in charge of this issue and you have analyzed the situation enough to know what is best for our country so go ahead and do what you have to do.”

I felt substantially more confident after that conversation knowing the possible consequence. I took the hard stance but in a gentlemanly manner, thank God, the negotiations continued and we finally put a closure to that difficult issue. I wish to highlight the firmness of your resolve to do what is right for the country against all odds.

I also remember the Asean conference in Cambodia when we felt so alone in our posture, when other members were not yet as eager to discuss the issues of the seas, yet you were so firm. The late night, even past midnight meetings, to explain our position were difficult.

I was tired but every time I saw you were still at it, I felt embarrassed to complain or even consider weariness, being much younger than you. I marveled at your being so proper and poised even when your answer was a “No” or we took a no-compromise posture.

You have a way of saying no or negating the party across the table in such a gentlemanly manner that they could not react any less.

I will never forget the last session of that summit, when only the President, you and I were in the room with the other delegations and we realized that all the hard work had paid off, I was so proud to be seated beside you, sir, behind the President.

On the same week, five days after your microphone was turned off during one of your controversial addresses explaining our position and our version of the story, I was invited by the State Department to join a forum in another city in the same country. About halfway into my presentation my microphone suddenly went dead. I saw Ambassador Harry Thomas stand up from his seat and Secretary of State Clinton turned to look at me.

I was told days before about how you calmly continued speaking even without a microphone, so I paused for a while deliberately, showing neither panic nor irritation. Fortunately, the technician was able to solve the problem and my microphone was working again, nothing geopolitical, just an honest technical problem.

Another foreign diplomat eventually congratulated me, and said, “You Filipinos handle these challenging situations really well.” My guiding thought at that moment—how would Secretary Albert handle this?

Sir, the cliché “an officer and a gentleman” does not come close to how I would like to describe you, so instead I say, you are a firm diplomat and yet a perfect gentleman.

Another Secretary Albert characteristic I would like to highlight is your sense of commitment and perseverance. Many times I would wonder how you could continually work with us into the late hours preparing statements and documents to be handled on the next day’s summit sessions. Not once did I hear you complain and even at 3 a.m. you could still crack a joke just to lighten the mood as we finished up.

I have never seen you drop the ball on anything; whatever it was, you held your accountability to the letter, there was never anyone else to blame, you always took full responsibility of your department’s victories and otherwise.

Your professionalism is impeccable yet you show heart and care when it matters most, especially when it comes to our overseas Filipino workers.

In compliance with your instructions not to reveal too much detail, I will not discuss details, but I can never forget the last night in Malaysia. We barely got a few hours sleep the night before after the last pull aside meeting of P-Noy on the Mary Jane issue. It was the last night before the scheduled execution, and as the President clearly stated very early on, we would not stop trying for as long as she was still alive.

The hotel was full with the other delegations, we could not find a room to meet in but we had to meet and discuss ASAP. It was past 8 p.m. and you had not yet eaten while we already had finished dinner. We decided to huddle on one of the sofa sitting areas at the hotel lobby because you wanted to show me a letter and some documents. I knew you had back problems and was already in pain.

I realized how bad it was only after I had seen you grimace and your face turning red in pain and you slumped down because the sofa was too low.

That was the first time I saw how bad it was and I stood up to assist you, you could not speak at first because of the pain but you eventually said let’s discuss this important matter. I saw the dedication and perseverance, which to me was heroic.

The effort continued on our return  to Manila the following day, at around 11 p.m., after one more call to Indonesia and I felt so helpless and  decided that the most I could do was pray. You were still at it and when I got your text after 2 a.m., “Mr. Secretary, we did it!”

I said two prayers immediately —the first to thank the Lord for saving her life, the second for giving you the perseverance to push on even when, embarrassingly, I had already given up. Resolute perseverance and dedication to the task you have committed yourself to.

You have been silently suffering in pain with your back problem for over a year, with so many trips, summits, state visits, and yet never once did I hear you complain.

Mr. Secretary, you are a dedicated and firm diplomat but always a gentleman. Magnanimous in victory, as they say. Forgive this long letter but I could write a book about the diplomatic journey I have had the privilege of being with you. Be assured I will never write that book.

We constantly remind ourselves in the Cabinet that the Filipino people will never know what we had to go through for them. In behalf of the 100 plus million Filipinos who will never know the sacrifice and effort you have done for them, thank you very much Secretary Albert for your love of country.

As we always toast to, single malt or blended—“Cheers Mr. Secretary!”

P.S. I have taken the liberty of sharing this letter with the rest of your DFA family who I know fully agree with what I have shared here.