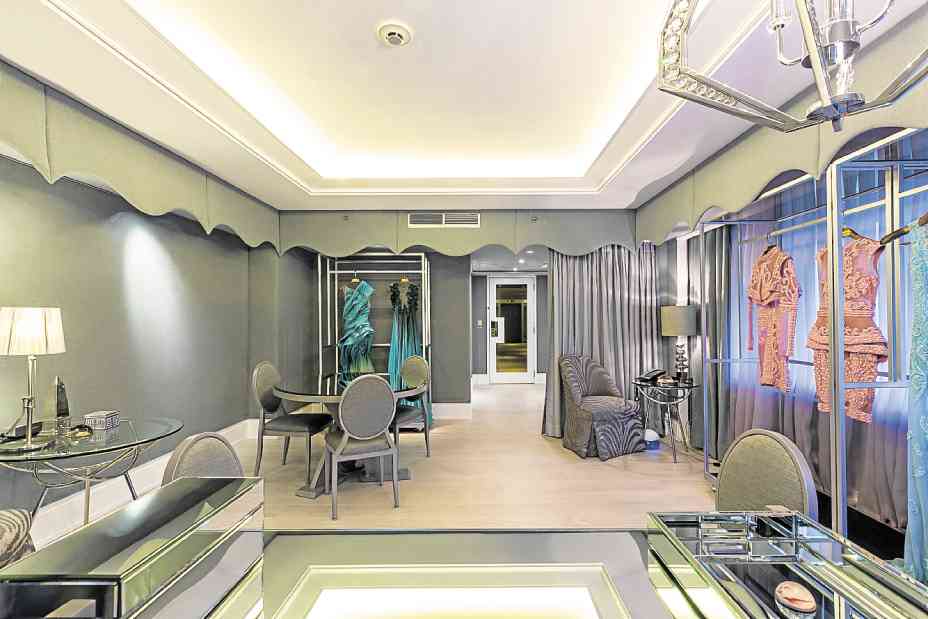 FROM A 27-squaremeter shop at the Peninsula Manila basement, Libiran moves to this 89-sqm space on the second floor that used to be a onebedroom suite. In lieu ofmannequins and fitting forms, he opts for metal frames to hang his creations. PHOTOS BY PJ ENRIQUEZ

AFTER two years of doing business in a small, 27-square-meter shop at the basement of the Peninsula Manila, designer Francis Libiran moved to a bigger address on the second floor of the hotel.

Since late last year, Libiran has been receiving clients mostly from the south every Tuesday and Thursday at his new “French-inspired” unit. With a total floor area of 89 sq m, the shop comes with a receiving area and separate room that doubles as a fitting and waiting area for clients and their relatives and friends.

“We need a big waiting area because it’s common for Filipino brides and debutantes to bring along their friends and relatives during fittings,” Libiran explained.

Visitors need not venture outside to powder their noses or answer nature’s call because the unit, which used to be a one-bedroom suite, also comes with its own powder room. Libiran also allotted space for a small back office for his staff.

“I still maintain a shop in Quezon City, where everything started. It is also where we produce the clothes,” he said.

Libiran, a licensed architect before becoming a full-time designer, and business partner Arsi Baltazar collaborated with interior designer Ivy Almario to achieve their idea of a modern, “Frenchified” space with minimal details and plenty of masculine touches.

Instead of choosing pastels and jewel tones, the duo opted for a neutral color scheme of dove gray and white. They also had the suite’s wall-to-wall carpet removed and replaced with a wood veneer floor with touches of gray.

Dove gray walls and valances were padded to absorb sound and double as a neutral backdrop for Libiran’s embroidered and beaded dresses. Like in his old shop, he didn’t use mannequins and fitting forms to display his dresses.

He opted for a series of frames to hang his clothes. They were the only items retained from the old shop.

Almario used plenty of mirrors to brighten certain areas and add an illusion of space, especially in the powder room. She also had the receiving area’s ceiling modified to resemble a giant picture frame with a series of cove lights.

A substantial portion of the budget went to custom-made furniture and accent pieces. On Almario’s recommendation, Libiran and Baltazar shopped for chandeliers, lampshades and tabletops at Pietro in Makati.

One of the receiving room’s focal points is a modern chandelier almost directly above the designer’s desk. Instead of hanging it in the center, the chandelier dangles a bit to one side of the desk.

“Otherwise, I would hit my head every time I stand up,” said Libiran. “Arsi and I went around and couldn’t find pieces that we really liked, until Ivy told us about Pietro.”

In keeping with the shop’s minimalist aesthetic, Libiran keeps his worktable clutter-free. He brings out tools of the trade like pencils and illustration pens only when he needs to draw.

“I do my own sketches,” he said. “I usually do them on the spot in the presence of a client.”

An encased pedestal beside the designer’s desk features a diamond-encrusted men’s watch. The eponymous timepiece is one of four variants that appeal to both men and women.

Since Libiran introduced the line in 2014, he has already been able to sell more than a dozen watches. The movement is made in Japan, and the watch, which is encrusted with 677 diamonds, takes at least three months to make.

“Arsi and I have plans of making Francis Libiran a lifestyle brand,” he said. “The watch is an extension of the brand. Aside from the watch, we will soon be launching a furniture line.”