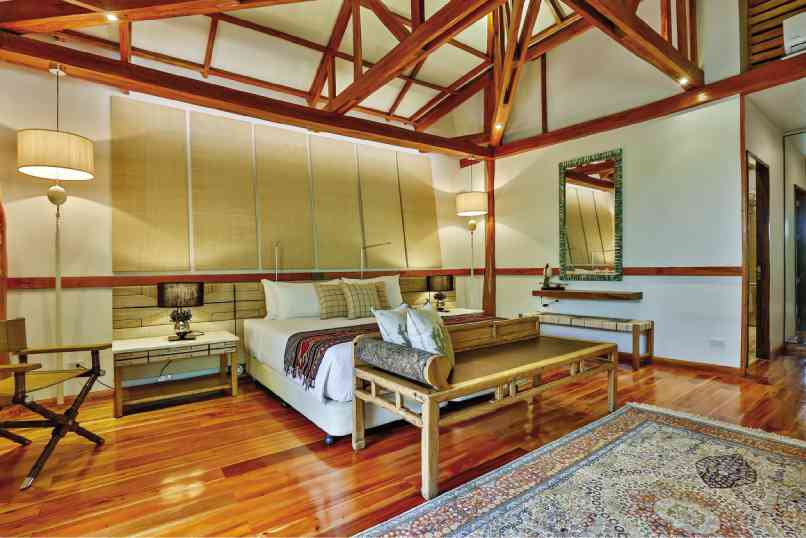 TRADITIONAL weaving is infused in the contemporary headboard and side bench. The abalone-framed mirror hovers over the floating teak shelf. Linens are made in Cebu.

FRENCH interior designer Nicolas Moussempes says that his works aim to create a sense of place. His latest oeuvre are the lodges at Tarsier Botanika Nature Park, which engage the guest by connecting the design with its surroundings.

This exclusive resort in Panglao, Bohol, began as a way to keep him and his Filipino wife, Patricia, busy in their retirement. From a place where they kept a menagerie of animals mainly endemic to Bohol, the property has assumed different roles—as one of Bohol’s best restaurants, a horseback riding facility, and now, a hotel.

Instead of cutting down trees, Moussempes says he “collaborated” with the land. The villas are flanked by clusters of trees and untouched jungle foliage. Every lodge feels as if it is in an intimate and private spot. The slanted walls and high-pitched thatched roof are references to the Ifugao hut.

“My design philosophy is to adapt to where you are,” says Moussempes. “In the Philippines, I don’t want to build a house from Thailand or Bali. I believe in integrating with the ambient nature. If I designed a unit in Manila, it would have fewer options.”

“Here,” he adds, “there are many options because of what nature offers. I create something that is related to the province. I try not to disturb the land as possible. When these houses are built between the trees, the effect is organic.”

Moussempes says he had adapted Ifugao architecture for authenticity. The slanted walls not only give character but also lend a feeling of snugness. The beams and flooring are made of mahogany, an abundant material in Bohol. Each door is a domino pattern of recycled wood.

Instead of modern concrete, the walls are made of compacted palm tree. Pillars, not walls, hold up the ceiling and its trusses, creating a continuous line from ground to ceiling.

“This gives you a sense of a traditional house—lots of wood,” says Moussempes.

The sense of coziness is heightened by other textures. Foreigners are fascinated with the walls sporting the amakan design, a basket-weaving pattern. Instead of traditional bamboo strips that tend to attract insects, weather-resistant PVC strips were interlaced on site.

“It feels as though you’re inside a basket,” says Moussempes.

European elegance is combined with homespun comforts. “We wanted to put in little surprises,” he explains. “It should feel like being in a country but with luxury.”

The living room’s focal point is a wall shelf of tinted basket weave in the background and bleached gmelina. The space is furnished with a variety of organic finishes such as the seagrass furniture and abaca carpet from Albay.

As a surprise, a nesting table, made of Mactan stone and wrought iron, is placed alongside a woven linen upholstered recliner, a nod to Le Corbusier’s famous LC4 Chaise Longue. Instead of the usual cabinet, the bar is a traveling chest, customized in Bohol.

The walls are adorned with photographs of marine life and Italian drapery of corals and shells, suggesting the resort’s closeness to Alona beach.

“These lodges are heavily decorated more like a Ralph Lauren house than a standard hotel,” says Moussempes.

The designer had worked in the family business, Cetec, a fabric supplier and interior design company based in Hong Kong. Clients included luxury hotel chains such as as Conrad, Shangri-La, Peninsula and Mandarin.

Moussempes also decorated the first Cartier boutique in Asia and the Ralph Lauren showroom in Hong Kong. Cetec has been since sold to another company.

Six years ago, he and his wife decided to retire and live in Bohol, where they could be closer to nature.

“Tarsier Botanika started out like a Jurassic Park without the dinosaurs,” recalls Moussempes, referring to the animal menagerie.

“People would come to photograph the tarsiers. But they are nocturnal creatures. We decided they were better off in the forest. We just kept the name. Today, it’s a sanctuary. People can relax. It’s like a cove,” he notes.