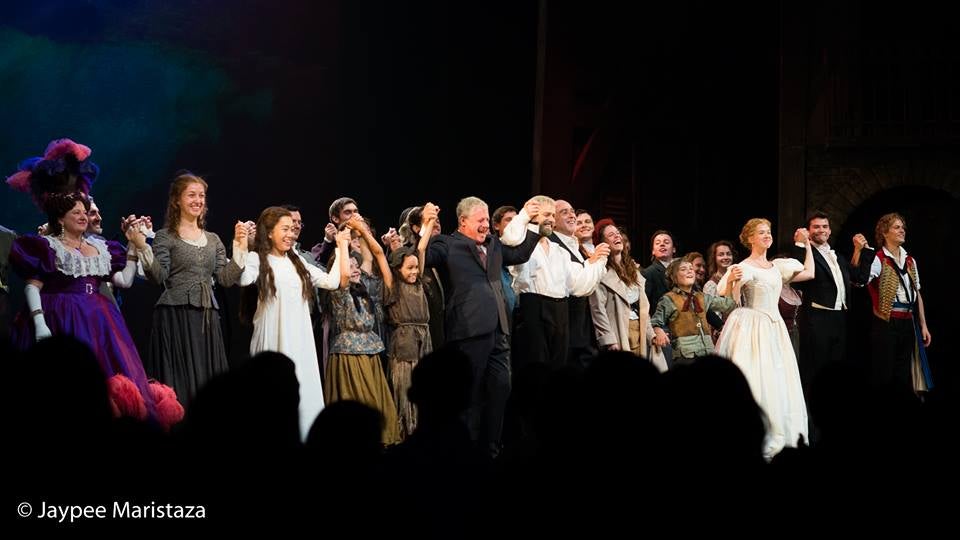 French composer Claude-Michel Schonberg profusely thanked Filipinos and the Philippines last night at the gala opening of “Les Miserables” for the many local talents that had headlined and continue to star in international productions of “Les Miserables” and “Miss Saigon”, the long-running musicals he wrote with lyricist and fellow Frenchman Alan Boublil, and produced by legendary British impresario Cameron Mackintosh.

Speaking at the curtain call of the Australian production of “Les Mis” that has just opened at The Theatre in Solaire Resort & Casino and runs untilApril 24, Schonberg recalled that in 1988, when Lea Salonga auditioned before them for “Miss Saigon”, the first song she sang was “On My Own”, the plaintive ballad from “Les Mis” sung by the young heroine Eponine.

“We realized that far away in the East there was a country where ‘Les Miserables’ was already popular,” said Schonberg. “And after ‘Saigon’, [Lea] did Eponine, she did Fantine. So did Joanna Ampil, who is here with us tonight.”

Schonberg, along with Mackintosh, was in town to grace the gala opening of “Les Miserables,” which has come to Manila after some 600 performances over 19 months in the cities of Sydney, Melbourne, Perth and Brisbane in Australia.

The largely Australian cast is led by Simon Gleeson as Jean Valjean and Kerrie Anne Greenland as Eponine, both Helpmann awardees (Australia’s version of the Tony awards) for their performances in the musical; Earl Carpenter as Inspector Javert, who joins the Manila run direct from the ongoing Broadway production in New York; and Filipina actress Rachelle Ann Go as Fantine, who had been playing the same role in the “Les Mis” currently running at Queens Theatre, London, after her stint as Gigi in the West End revival of “Miss Saigon”.

When “Les Mis” wraps up its Manila run and begins its Asian tour with performances next at the Esplanade in Singapore, Go will return to the London “Les Mis” and be replaced on the tour by Australian actress Patrice Tipoki, who has temporarily switched places with her in London. Tipoki also played Fantine in the Australian run of the musical.

Go is the latest Filipino actor to have been cast in an international production of either “Les Miserables” or “Miss Saigon”. Jon Jon Briones is set to reprise his acclaimed turn as the Engineer when the West End revival of “Miss Saigon” heads to Broadway in 2017; the Kim in the said production has been played by Fil-American discovery Eva Noblezada and, at certain performances, by two other Filipinas: Julia Abueva and Tanya Manalang, the latter recruited from auditions held in the country in 2012.

The Manila “Les Mis”, in fact, opened on the same week that a new round of auditions for “Miss Saigon” was being held at the Opera Haus building in Makati, with hundreds of hopefuls lining up to try their luck before a panel that included Schonberg, choreographer Geoffrey Garratt, director Laurence O’Connor and Mackintosh himself, who is known for taking a meticulous, hands-on approach to all aspects of his stage productions.

“Since casting for Miss Saigon began in the mid-1980s, the Philippines has been integral to the show as a place to find exceptional Asian performers of world-class ability,” Trevor Jackson, Head of Casting for Cameron Mackintosh, said in a statement.

Taking a bow with Mackintosh and the entire cast of “Les Miserables” before an enthusiastic gala audience that had given the show a sustained ovation, Schonberg said: “For being so kind with our work for many, many years, I just would like to say, ‘Salamat po, Pilipinas.’”  With a report by Pam Pastor