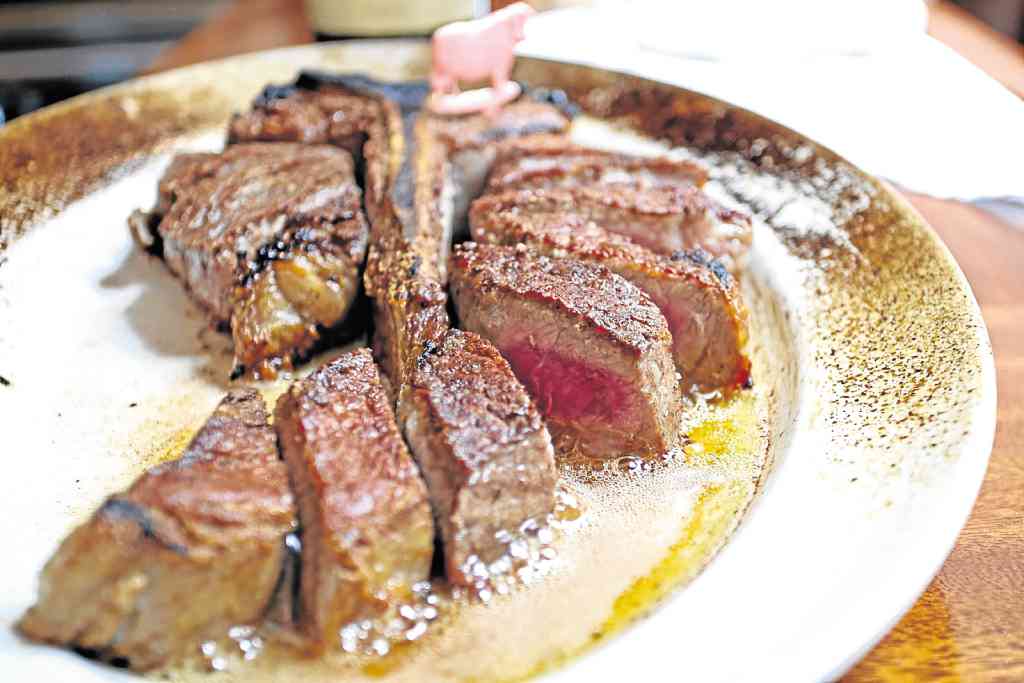 PORTERHOUSE steak is served on a tilted platter to let the butter collect at the bottom. PHOTOS BY KIMBERLY DELA CRUZ

The new steakhouse people are talking about

There’s a new steakhouse in town and its main draw is the dry-aged beef that is flown in weekly, fresh-chilled from the United States.

Wolfgang’s Steakhouse, on the second level of Resorts World Manila, has been doing brisk business since it opened less than a month ago.

Most guests who book a table are familiar with the restaurant, as it has been operating in the US for more than a decade now. Some mistakenly think the “Wolfgang” in the restaurant’s name is Hollywood chef Wolfgang Puck, but is actually Wolfgang Zwiener.

Wolfgang Zwiener worked for 40 years at Peter Luger’s—the cash-only steakhouse founded in the late 19th century—where he was headwaiter until he decided to venture on his own.

With the help of his son Peter and two other waiters from Luger’s, Zwiener opened his first branch at 4 Park Avenue in Manhattan on Feb. 26, 2004.

Now there are Wolfgang’s branches in Japan and Korea. In the Philippines, Zwiener partnered with the Sumo Sam Group whose other restaurants include Sumosam, John & Yoko, Alqueria, Banzai, Balboa and Marcianos.

Its menu is almost the same as those in Wolfgang’s branches overseas, exactly the way Zwiener wants it.

Zwiener flew in with his mother, and son Peter for the grand launch a few weeks ago. They personally checked on the dry aging “box” where the beef is allowed to age for a maximum of 28 days so that the connective tissues break down, resulting in a distinctly flavored, tender steak.

The Zwieners also checked on the wine bar at the back, and the whiskey room near the main entrance where guests can smoke and choose from the 60 different single malt whiskeys.

Since Wolfgang’s is a steakhouse, guests zero in on the selection of prime steaks, often choosing the porterhouse that comes in sizes good for two, three or four. These are priced from P4,500 to P9,000 although there are NY sirloin, rib-eye, filet mignon and petit filet mignon, too; the last is the least expensive at P1,500 for 250 grams.

“Guests can be sure they get what they pay for as the weight of the steak is based on their weight once cooked,” Wolfgang’s general manager Ian Varona told Inquirer Lifestyle.

“Unlike other steakhouses where the steaks shrink after cooking, ours are dry-aged which eliminates much of the moisture so the meat is more compact and has a nutty flavor,” he added.