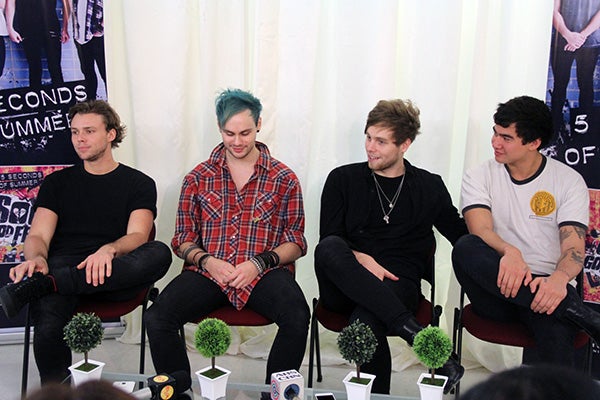 The boys of ’Summer’. 5 Seconds of Summer’s Ashton Irwin, Michael Clifford, Luke Hemmings, and Calum Hood sit down for a quick, fun-filled chat with Inquirer Super and select members of the media. PHOTO BY YAM ENRIQUEZ.

10 minutes with 5 Seconds of Summer

How are you guys feeling?” drummer Ashton Irwin asked as we sat down for a quick interview, hours before 5 Seconds of Summer (5SOS)’s first-ever Manila concert at the SM Mall of Asia (MOA) Arena.

Outside, diehard fans wearing bunny-ear headbands—with the band members’ faces glued on them—kept chanting, “5SOS! 5SOS!” while waiting to be let inside the venue.

Good thing they were oblivious to their idols’ presence just a few feet away, safely hidden behind a wall, or else they would have knocked it down by sheer force.

“These microphones look like trees,” Clifford said, whereupon Irwin promptly took one and continued talking in all seriousness, as if he was holding a real mic.

As the guys started debating on the most important thing to bring while on tour, from mic stands to “a really hot masseuse” (“We’re looking for one. We’re hiring!” Clifford said cheekily), we could see glimpses of the bright-eyed, beardless teens who had racked up thousands of YouTube views with cover songs almost five years ago.

Now, the members of the Australian pop-punk band are grown men—6-feet tall and barely in their 20s, sporting 5 o’clock shadows, multiple tattoos on their arms and deep-set eyes from nonstop touring.

“Mine are actually getting less skinny… I look at my legs and they’re like, ‘You’re getting older now, buddy. Probably loosen up those jeans if you want to have any children one day,’” Irwin said with a chuckle as the others self-consciously uncrossed their legs.

Manila was the last stop of the Asian leg of the band’s “Sounds Good, Feels Good” world tour. Tickets for this show had sold out faster than you can say “Vapor.”

For the tens of thousands of giddy teens at MOA Arena, the gig had been a long time coming, and the band felt the same way.

“We’ve been wanting to come here since we started the band,” said Irwin. “I think our fanbase kind of grew here just as quick as it did in Australia, which was crazy because it was like the dawning of the online fanbase, and that was really interesting. So it’s exciting to be here, finally.”

The band’s strong Filipino ties go way beyond the fanbase. Hemmings fondly recalled his first friend at school, who was Filipino.

The guys also talked about working with “a really wonderful human” named Gabby (“We’ve been working with her since pretty much day one when we started in Australia,” Irwin said), and about a former schoolmate named Ron, whom Irwin considered one of the best drummers he’s ever seen: “His entire family is from the Philippines, and he kind of taught me a lot of the drumming I know today, so that’s cool.”

The foursome rose to international fame as the opening act for the “Take Me Home” tour of the then-quintet One Direction.

In 2014, 5SOS released its chart-topping self-titled debut with the smash hit “She Looks So Perfect,” followed by a live album, several EPs, a documentary, and the sophomore record for which the current tour is named after.

Since then, 5SOS has been steadily gaining its own horde of squealing fangirls (and fanboys) across the globe with infectious pop hooks, crazy punk riffs and the requisite “hey” and “whoa-oh” of youth anthems. Paying homage to rock heroes its members grew up with, 5SOS’s sound is reminiscent of Green Day, Blink-182 and their ilk.

It has even collaborated with the likes of All Time Low’s Alex Gaskarth and Good Charlotte twins Benji and Joel Madden, who had penned the bittersweet acoustic single “Amnesia.”

5SOS’ recent single, “Hey Everybody,” dug into the pop archives, borrowing heavily from Duran Duran’s “Hungry like the Wolf.”

Meanwhile, the second album sees the band’s transformation from cheeky young newcomers to kings of the so-called “new broken scene,” with darker, more emotional tunes that today’s kids can wholly relate to.

The music video for the group’s latest single, the angst-ridden power ballad “Jet Black Heart,” features 5SOS fans who wanted to share their stories with the band and the rest of the world.

5SOS continues to defy stereotypes during live shows, displaying a skill level and onstage presence that could rival its biggest rock idols.

Far from being the typical boy band, the quartet has proven to be a legitimate rock band whose members sing while playing their instruments of choice— and they happen to sing and play really well.

At its MOA Arena show, the band’s collective energy was almost palpable as it played almost 20 songs in less than 90 minutes—without breaks, like a well-oiled machine.