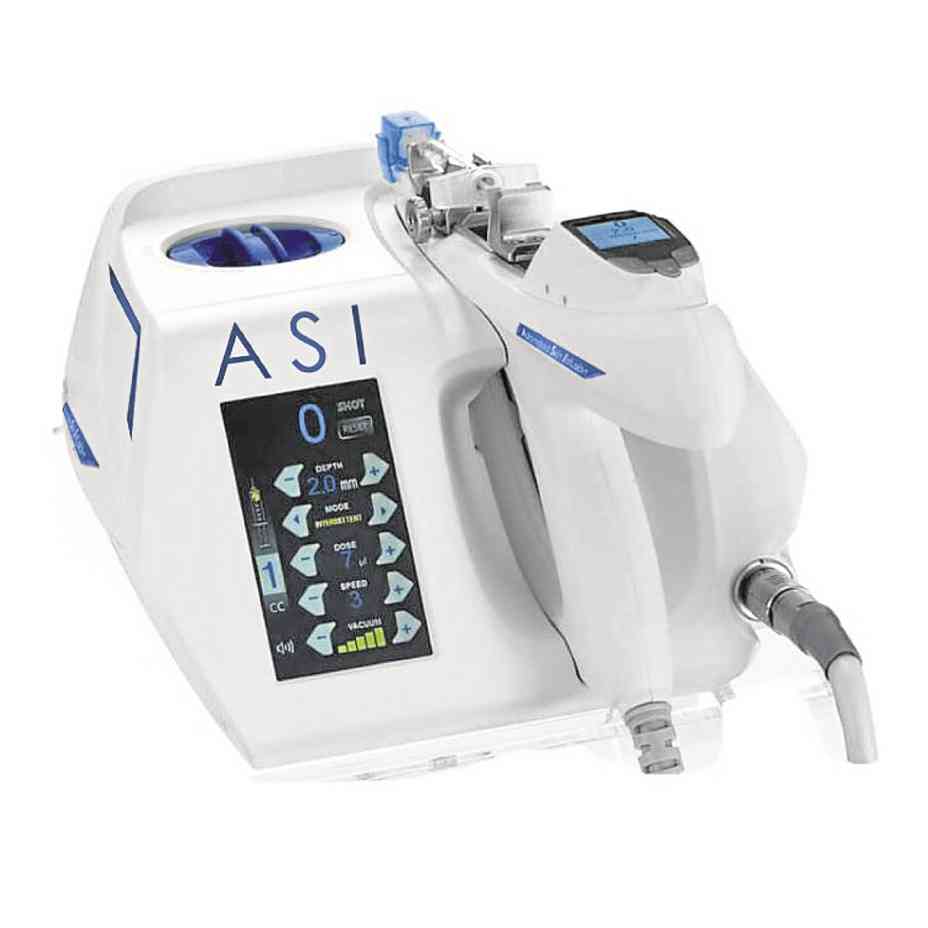 BY DELIVERING moisture-enhancing boosters like hyaluronic acid and whitening agents like vitamin C and glutathione, the Automated Skin Infusion, with its builtin gun, works beyond the skin’s outer barrier or epidermis to give patients youngerlooking skin.

The Korean presence goes beyond smartphones and telenovelas. It extends to two of the latest nonsurgical beauty treatments designed to eradicate recurring pimples and give beauty junkies soft, dewy skin.

The buzzword among Koreans these days is hydration, said Dr. Janice Soriano of Aivee Clinic. No matter where you live, proper hydration keeps skin from looking wrinkled, leathery and old before its time.

“Simply slathering moisturizer on your face isn’t enough,” she said. “Studies reveal that 80 to 85 percent of moisturizers simply evaporate. They can’t go beyond the skin’s barrier or epidermis.”

Short of creating moisturizers with microscopic molecules to penetrate the skin, a Korean company has introduced Automated Skin Infusion (ASI).

The machine, which comes in the form of a gun with a 31-gauge needle, can be loaded with moisture-enhancing boosters such as hyaluronic acid. It can also be loaded with vitamin C and glutathione to help patients achieve fairer complexions.

A doctor does the treatment by pulling the trigger on various parts of the face, but the gun itself is capable of calibrating the depth—between 1.2 to 1.6 mm—and amount of hyaluronic acid to be administered through a series of adjustments.

“This feature minimizes human error and allows the doctor to administer the treatment evenly,” Soriano explained.

The treatment takes all of 14 minutes— seven minutes or approximately 50 shots on each side of the face. Soriano’s patients who underwent the treatment were able to tolerate the pain.

To get maximum benefits that could last up to a year, a patient has to undergo ASI every month for three months. People usually start losing collagen in their late 20s. Instead of waiting for telltale signs of aging to show, they can start undergoing regular ASI treatments before they hit their 30s.

“Hyaluronic acid gives the skin a nice, luminous texture. It’s like the supple look we see on teenagers, the dewy finish,” she said. “Except for small, hardly visible dark spots that usually go away two to three days after the treatment, ASI has no downtime.”

Even those in their 70s and 80s can benefit from ASI, Soriano added. They just have to undergo more treatments. Instead of having three treatments, for instance, they can do five.

For those with acne scars, ASI also helps make them less visible. Since it can minimize the appearance of wrinkles, it also works on the hands. But it can’t get rid of pigmentation or add volume to the face.

“To add volume to the face, you would need to resort to fillers,” said Soriano. “ASI also works well with other treatments like RevLite and PicoSure.”

For stubborn and recurring acne, Soriano and her colleagues at Aivee Clinic use Agnes, a laser machine that “destroys” pimples permanently by zeroing in on the source.

Agnes was also invented by a Korean dermatologist, who named the machine after his wife.

In his experiments involving several acne-prone subjects, the dermatologist did a microscopic check of their oil glands. He wanted to know why, despite being subjected to pricking, antibiotic treatments and injections, the patients’ pimples keep recurring on the same spots.

“He found out that when you burst, prick and even scratch pimples they cause fibrosis around the pathway where oil is secreted,” said Soriano.

Since fibrosis leads to thickening or scarring of connective tissues, the resulting injury causes a virtual bottleneck that traps oil and clogs pores in the same areas.

Instead of resorting to creams, injections and pricking, the Korean dermatologist and his collaborators came up with a laser radio frequency machine with a tiny tip that emits a laser that could zero in on the gland and destroy it permanently.

Pain in the form of heat is tolerable. To minimize it, Soriano puts numbing cream on the affected area before each treatment.

“It would take a few sessions to target all the stubborn and recurring acne,” she said. “Downtime comes in the form of tiny scabs.”

Agnes is also ideal for addressing deep acne scars. By using a broader tip, the laser helps destroy fibers that are pulling acne scars down. In effect, it helps “release” irregular facial craters.

When it comes to dealing with acne, injections and pricking won’t become things of the past anytime soon, said Soriano. A good number of doctors and patients still prefer those methods. But by using lasers, they now have a newer, faster and perhaps better alternative.