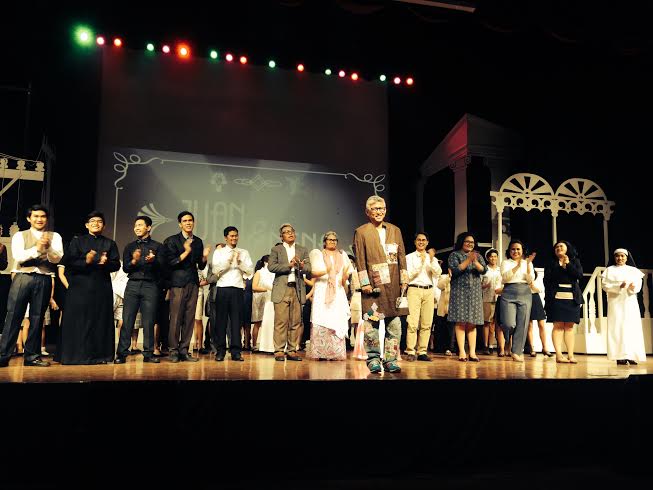 Angeles City—The love story of Juan and Teresa (Nena) Nepomuceno and their partnership in charities and business enterprises that helped build this Pampanga city are now preserved in a musical.

“It’s a great family that transformed Angeles and affected the destiny of communities,” he said of the couple and their 10 children.

The musical was staged 12 years after Erlita Mendoza and HAU published “A Cofradia of Two,” a biography of the couple. A National Book Award winner in 2005, the book is like going through the history of Angeles, as well as getting pointers on how to nurture a partnership and be parents, church and community leaders all at the same time.

The musical also saw life on theater more than 40 years after Teresa died in 1970 at age 76 and Juan passed away in 1973 at age 81. Of their 10 children, three have died: Father Relly, Geromin and Mamerto.

A daughter, Benedictine nun Josefina, found the portrayal of her parents to be accurate. “They were really a marriage of opposites,” she said.

It did not suppress the suspicions of folk that Juan and Teresa made acts of kindness for their business and political interests.

Peter, the youngest son, said: “I did not expect the play to be entertaining. They made it quite exciting.”

Taking turns in the role of Teresa were May Gosioco, Cindy Lapid, Melissa Malasarte and Rosette Buenaventura-Aquino. Bernard Lansang and Emmanuel Singian took the role of Juan.

Juan (born March 8, 1892) was a great grandson of Don Angel Pantaleon de Miranda, the founder of then Barrio Kuliat, which became a city in 1964. Teresa (born Aug. 12, 1893) was a granddaughter of Patricia Mercado and Fr. Guillermo Masnou.

Married on March 19, 1919, they began running an ice plant in 1921, Angeles Electric Light and Power Plant in 1923, Reina and Aurora Soft Drinks in 1928, Holy Angel Academy in 1933, Villa Teresa Subdivision in 1965, and Nepo Mart in 1968. Teresa handled the operations and Juan, the accounting and bookkeeping.

“Stories of beginnings, narratives of struggles and triumphs, wars and disasters, moments of love and abysmal losses, infinite faith in the Divine: Juan and Teresa had some of the finest hours that our beloved city has ever seen—and will probably never see in a long time to come,” Mendoza wrote.