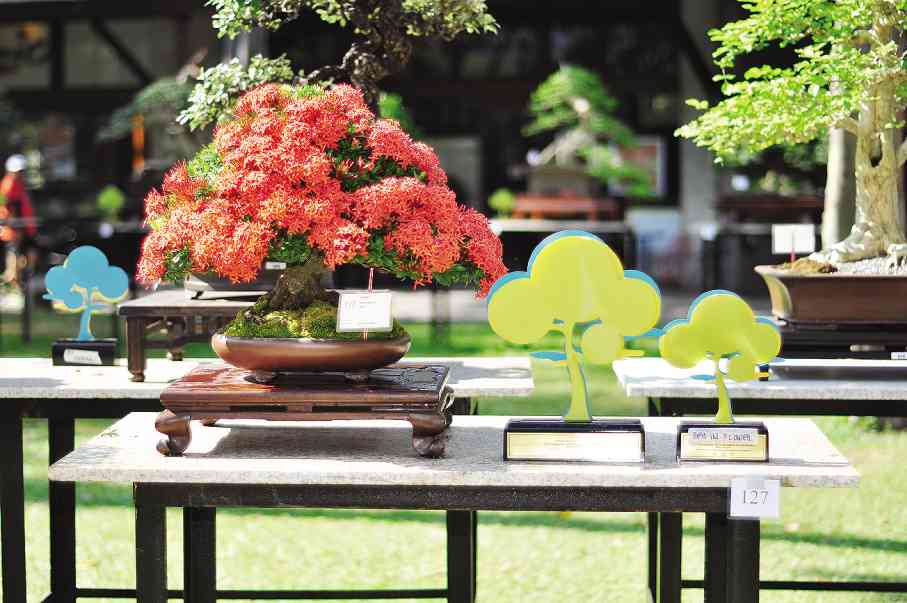 SANTAN by Roberto Gopiao won in the Gold Category

‘Bantigue’ still the most popular bonsai tree in the country

BONSAI, the art of cultivating miniature trees in pots, continues to thrive in the Philippines. Proof is the country recently hosting the 2016 Philippines-BCI (Bonsai Club International) Convention and Exhibition.

For one weekend, the Ayala Triangle Gardens turned into a forest of dwarfed trees and a stone garden, set up by the Philippines Bonsai Society Inc. (PBSI) and the Natural Stone Society.

Some 280 bonsais and 80 stones, looked upon as sculpted materials, were displayed like artworks for the viewers to appreciate at a distance. The entries were judged by foreign guests.

The overall winner was a bantigue, crafted by Dr. Alfred Manarang, described as a formal upright style. “The tree tapers straight up, but the branching is asymmetrical. The trunk is aged, you can see that it has been living in the wild and has gone through typhoons,” explained Gopiao.

For so long, the bantigue (Pemphis acidula) has been the most popular among collectors and hobbyists. Unlike other trees that are wheedled into desired shapes with cuttings and wires by human hands, the coastal bantigue acquires its ruggedness and form from the effects of the winds and waves.

“How can you beat nature?” said Gopiao.

Because the bantigue grows fast and produces roots and buds quickly, it is a favorite of hobbyists who are in a hurry.

Eight years ago, the bantigue entries kept winning the competitions. Its dominance drove the bonsai enthusiasts to eschew the other trees for bantigue.  Gopiao cited that the Philippines has many trees that offer potential, such askamuning, lantana and the lowly santan. This time, half of the entries were trees of different species.

Gopiao’s santan won in the non-bantigue category for its clean silhouette, visually pleasing spread of branches and profuse florals.

Gopiao said that a bonsai is judged by its tapering line, correct branch growth, elegance, attractive root base or nebari, and a pot that complements its total beauty. It is also considered a quality bonsai when the design is innovative in bringing out the best in the tree—balanced, soulful, cut and wired neatly, and properly exposed to sunlight.

Gopiao pointed out that bonsai is not just for hobbyists: “It gives jobs to farmers. Many of our members are farmers who gather the materials from the wild and train the trees.”

Training is the term for planting the trees in pots and manipulating the growth of the trees and branches through wires, trimming and sunlight.

“These farmer/trainers can earn P1,000 to P1,500 a day. Hobbyists can engage their services if they don’t have the time,” said Gopiao.

The bonsais were complemented by an exhibit and competition of stones. Many of the Philippine entries were limestones culled from the mountains of Rizal. One of the most striking entries was a Sado-Akadama, a reddish stone from Sado Island, Japan, that looked like a sloping mountain with a tall peak. It is found in aquariums.

Another entry featured a black stone with natural white imprints shaped like chrysanthemums. These were formed as a result of being on the ocean floor for thousands of years.

Other stones were admired for their natural cavities, patterned surfaces and tunnels which allowed light to enter. Some stones suggested figures of a mother and child, a serpent, human busts and animals.

“The stone should communicate something to you,” said Thomas Elias, chair of the Viewing Stone Association of America and judge of the stone competition.

“When you take a piece of nature and bring it home, you can appreciate it for its beauty,” he added. “The stone can remind you of a landscape or a mountain. Looking at it helps you escape from problems.”