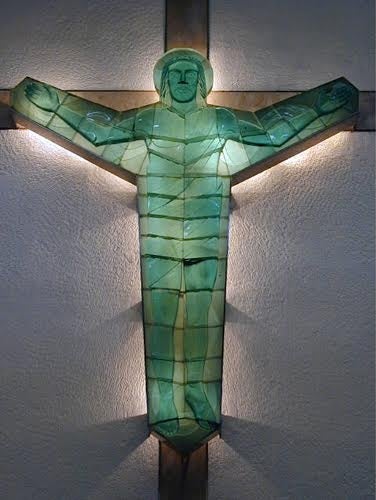 ‘THE RISEN Christ’ by Ramon Orlina

THE SPIRIT of recollection that governed the Holy Week should continue this Easter season.

To help readers reflect on the Easter message, here are four contemporary artworks that are spiritually charged and meaningful.

Perhaps because the story of Christ is told in the four Gospels whose writers are believed represented in the Christian tradition by the four creatures that surround God’s throne in the end of time as depicted in the Book of Revelations: human or angel (Matthew); lion (Mark); ox (Luke); and eagle (John). Needless to say, the four creatures are allegorical, therefore, iconographic or aesthetic.

Hence, here are four art works that can be aesthetic vehicles for deeper contemplation.

Glass and stainless steel, Our Lady of Edsa Shrine, Mandaluyong

Ramon Orlina harnesses the resources of glass and its unique qualities of reflecting and bouncing light in this tour de force of liturgical work.

Orlina’s conceptual achievement is very clear in this work which endows the Cross of Christ, often associated with death and defeat, with the liquid and triumphal brilliance of His Resurrection.

From Virginia Ty’s Marian monument so familiar to Edsa motorists to Nemiranda’s dramatic Edsa—history tableau in strking monochrome, Edsa Shrine itself designed by Francisco Mañosa is a showcase of modern liturgical art that should be appreciated by everyone.

Since breaking into the Philippine art scene in the early 1970s, Fernando Modesto has been known for the eclestic spirituality of his works, very evident in his angels floating and flying in his pastel landscapes. The Easter colors alone provoke one to meditate.

Although the overriding spirit of his works is mysticism, his oeuvre should provide a complement to Easter reflection in the context of the Catholic Church’s growing environmental activism as underscored in the much acclaimed papal encyclical, “Laudato Si.”

Arnel David Garcia’s highly provocative two-dimensional work (its width is three inches!) presents a myriad of faces of the Christ figure—from the ikonic images that have come down to us from ancient times (Byzantine, Medieval Gothic, classical Renaissance)—and melded with images of unmistakable Filipino features—the brown color, the squat nose, the noose-like lips.

But the “Faces” hover around the central details of Christ’s Passion and Sacrifice—the wounded hands and the nails of the Crucifixion.

Amid the Easter exhilaration, the message is quite provocative: The Resurrection of Christ transitions humanity to salvation. God Incarnate means universal elevation and redemption.

The painting by Marc Gaba is part of his “Days of Creation” exhibit that can be viewed starting April 8 at Galleria Duemila (210 Loring St., Pasay City, tel. 8319990).

Exhibit notes say the works were the result of Gaba’s “inexplicable desire to revisit the church in 2015, which led to analytic readings of the first chapter of the Bible,” hence the reference to the Genesis creation story in the exhibit’s title.

“Unlike the second chapter which focuses on the so-called Fall of Man, the first chapter is pure magic—magic that is, according to Giorgio Agamben, the key premise of happiness,” say the notes.

“Two Great Lights” shows two spheres—one dark, the other bright—representing dualism since, from his Genesis readings, Gaba said he “reimagines the creation of difference, of delineations, and that, read as an architectural program, seems to prefigure God’s eventual invisibility, if not the curious absence.”

The idea is problematic especially for Catholic theology, but Gaba’s work is useful for reflecting on the original innocence that obtained before the Fall of Man and the institution of rules to restrain his destructive desires. Has Eden been recovered due to the Resurrection?