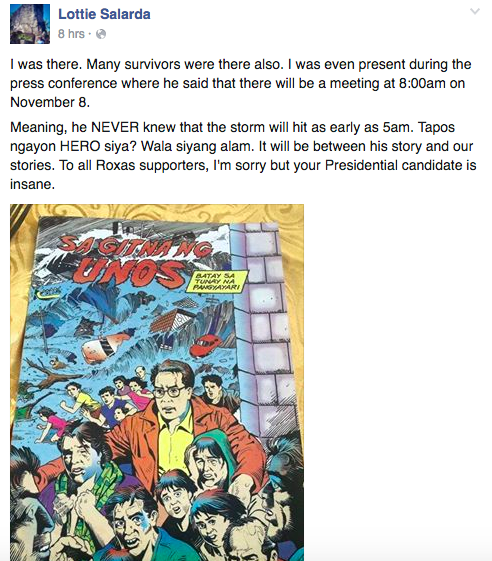 A comic book that tells the life story of administration presidential bet Manuel “Mar” Roxas II, which has become viral on social media on Monday, has been hit by critics for supposedly whitewashing Roxas’ lackluster performance in the aftermath of Supertyphoon “Yolanda.”

The comic book detailed how Roxas was thrusted into the political limelight following the death of his brother, former Capiz representative Gerardo Roxas Jr., his achievements as a public servant and his performance during “Yolanda,” typhoon “Ruby,” and the Mamasapano operation. The booklet ends with Roxas getting the endorsement of President Benigno Aquino III.

One of the panels in the comic book said that despite the harrowing scene of devastation left by “Yolanda” in Eastern Visayas, Roxas still led the relief operations there.

The comic book even said that Roxas almost lost his life while in Tacloban City.

However, the retelling of Roxas’ response during “Yolanda” did not sit well with his critics.

“Now Mar Roxas is a hero in his own comics, which is so obviously about the strongest storm to ever make landfall, and so obviously NOT about how he and his government messed up rescue, relief, and rehabilitation efforts in Samar and Leyte. Ito na marahil ang pinakanakasusulasok sa lahat ng nakita kong lumabas sa eleksyon na ito (This may be the most disgusting material that I have seen in this election),” she said in a Facebook post which was shared by more than 2,000 people and liked by 6,400 users as of this writing.

(Well, based on what really happened, Mar was inside the hotel when the supertyphoon struck. When the weather rage subsided, he had no satellite phone. He was cut off from the rest of the world. The AFP had to march from Calbayog so they could hand Roxas a satellite phone.)

For her part, journalist Lottie Salarda slammed the depiction of Roxas in the comic book as a hero.

“I was there. Many survivors were there also. I was even present during the press conference where he said that there will be a meeting at 8:00 a.m. on November 8. Meaning, he NEVER knew that the storm will hit as early as 5 a.m. Tapos ngayon HERO siya? Wala siyang alam (And now, he’s a hero? He doesn’t know anything). It will be between his story and our stories,” she said.

Sought for comment, Koalisyon ng Daang Matuwid spokesperson Ibarra “Barry” Gutierrez III said that the comic book does not intend to whitewash Roxas’ performance in the aftermath of “Yolanda.”

“Sec. Mar’s actions before, during, and after Yolanda are well-documented and a matter of public record. His performance during the two weeks he spent at ground zero of the strongest typhoon in history has been repeatedly scrutinized and everything that he did has been clearly established.”

“The truth in this matter is clear, and he stands by his record. There is no need, nor desire, to ‘whitewash’ any part of it,” Gutierrez told INQUIRER.net in a text message. RAM