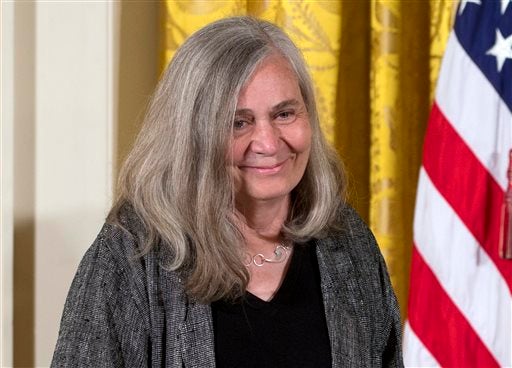 FILE - In this July 10, 2013, file photo, Marilynne Robinson appears at a ceremony awarding her the 2012 National Humanities Medal for grace and intelligence in writing in the East Room of White House in Washington. Robinson, the acclaimed author of such novels as Gilead and Housekeeping, is this years winner of the Library of Congress Prize for American Fiction, a lifetime achievement honor. (AP Photo/Carolyn Kaster, File)

NEW YORK — Marilynne Robinson, the acclaimed author of novels such as “Gilead” and “Housekeeping,” is this year’s winner of the Library of Congress Prize for American Fiction, a lifetime achievement honor.

In a statement released Tuesday, acting Librarian of Congress David S. Mao cited the “depth and resonance” of Robinson’s novels.

The 72-year-old Robinson won the Pulitzer Prize in 2005 for “Gilead,” the first of a trilogy of Iowa-based novels that also includes “Home” and Lila.”

Previous winners of the Library of Congress prize include Louise Erdrich and Don DeLillo.

She’ll be presented her award at the National Book Festival in Washington, D.C., in September.

Robinson says in a statement issued through the library that “American literature has been a kind of spiritual home” and the prize “could not be more gratifying.” TVJ