Aside from the sizzling ‘suman’ John Lloyd liked, there are other Pinoy faves | Lifestyle.INQ ❮ ❯ 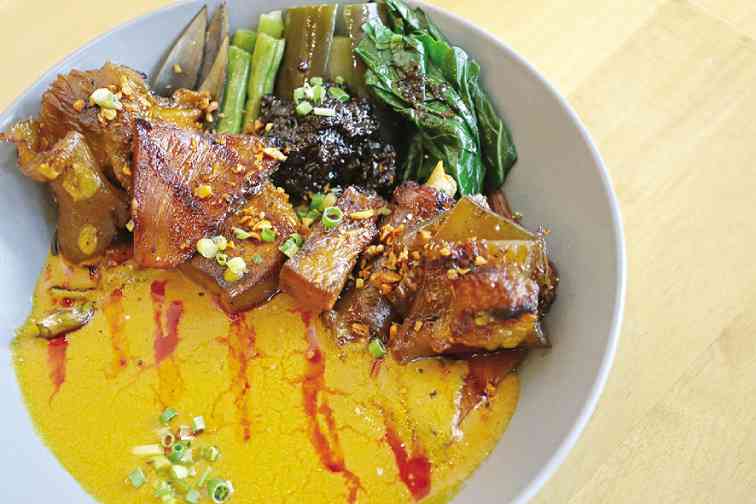 Aside from the sizzling ‘suman’ John Lloyd liked, there are other Pinoy faves

When chef JP Anglo opened Kafé Batwan seven months ago at Rockwell, the restaurant received much praise online and in print. Diners marveled at Anglo’s modern takes on Pinoy food. Some even felt as if they knew him; he was on the reality TV show “MasterChef Pinoy Edition.”

One of his aunts who dined in the restaurant was initially shocked at the price: P480 for a bowl of batchoy? Only after she tried it did she realize how much time and thought went into its creation.

“I wanted to experiment at Kafé Batwan, come up with items that were still basically Filipino but made using modern techniques,” said Anglo.

His take on empanada (meat-filled turnover) is flavored with pureed batwan and now goes by the name Kansi Panada—kansi being a popular Negrense beef soup.

Anglo is particularly proud of the restaurant’s Pancit Palabok that is topped with crablets, chicharon, soft-boiled egg and sauteed squid. He learned the recipe from an old vendor who continues to make this merienda staple in Malabon.

At Sarsa Kitchen—his other restaurant that now has three branches—the menu is simpler but delicious nonetheless.

“Street food” like pork barbecue and isaw (grilled chicken intestines) is served with no frills and is good for sharing. His partner in both ventures is his older sister Tracie Anglo Dizon.

“People who have eaten at Sarsa expect the same setup at Kafé Batwan,” said Anglo. “But when we  opened, the food was individually plated. Turns out, Pinoys like to taste from each other’s plates.”

“When it comes to Filipino food, Pinoys will always go for the familiar,” he noted.

That doesn’t mean he won’t stop trying to be different. For example, his Nose to Tail Kare-Kare with Ginamos (fermented shrimp) is served in a shallow bowl, with the sauce on one side and the vegetables on the other. Separating them is a “dam” of tender beef tongue, ox tripe and ox tail. The dish, like most of the new items, is good for two to three people.

“The Kare-Kare is my attempt to make Filipino food look nicer,” he explained.

True enough, it is more presentable and not just one lumpy, brown mush.

This can also be said of the other new items on the menu— but instead of just focusing on appearance, Anglo also made sure they taste good.

We returned with friends a couple of weeks later and were glad that the Kare-Kare, Sinigang and Lechon Kawali tasted as good as the first time—even without the chef overseeing our orders.

To cap our lunch, we ordered the Sizzling Budbud, suman with ube butter and coco pandan coffee cream.

When actor John Lloyd Cruz dined at Kafé Batwan several months ago, he enjoyed this dessert immensely that he offered to scribble a mini review on one of the restaurant’s plate glass windows. His verdict: “I came,” and signed it JLC.

Anglo credits his kitchen team for the consistency of the food. It allows him to sometimes take off and indulge in his passion for surfing.

“Some people think that’s all I do because they see pictures of me on the beach. What they don’t know is that I also use that time to experiment. I go to the wet market to check what’s available and try to come up with food that tastes good even if I have very little to work with in the kitchen,” he pointed out.

He then comes back—stoked and brimming with new ideas to try out.