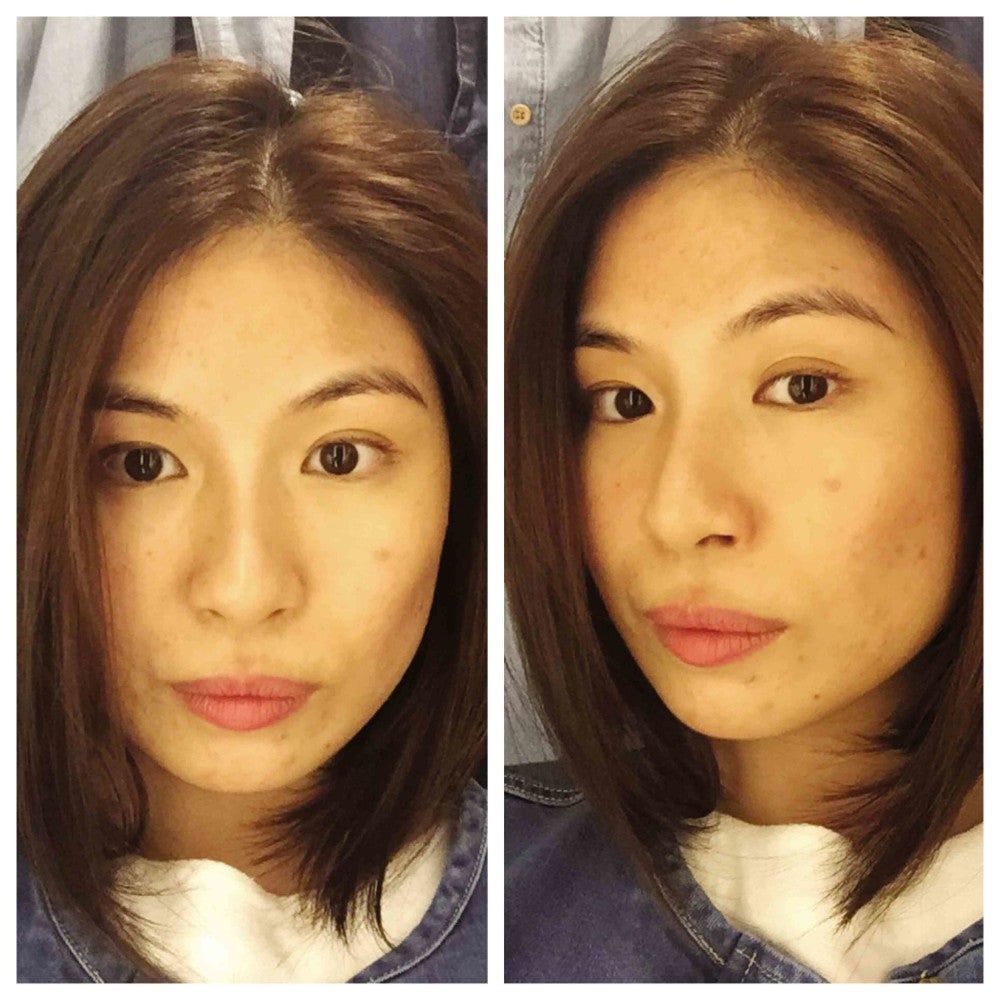 THIS is what my initial haircut looked like after air-drying. Notice the way the hair at the back sticks out.

FOR women in their late 20s, life lessons will present themselves, perhaps reflected in motivational posters bearing adages such as, “Nothing is ever truly free,” and “Do not mess with your hair!”

Two weeks ago, both lessons were seared into my memory like hot iron brands on a cow.

After getting an invitation to get a free haircut at a salon in time for Valentine’s Day, I thought, “Why not?”

I’ve gotten a blunt lob by Moussa Abdayem at Emphasis Salon, which I loved until my hair underwent a three-inch growth spurt in four months. (While some women have fast metabolism, I have fairly fast growing hair.)

At the salon for the free haircut, there were warning signs, but women like to do this cool thing and ignore their intuition. The hair stylist assigned to me fingered my tresses and asked why I had gotten such a boring haircut. “It’s all just one length!” he wailed. “There’s nothing going on here.”

Clearly he had never heard of Chloë Sevigny.

There’s a reason why top stylists hardly advertise themselves: If you’re the best, people will seek you out and sing your praises to others.

I’ve gone to Chiyo Tagami, Alex Carbonell, and Moussa, whose handiwork I’ve seen up close on a friend, boss, or co-worker. But people are always astonished at the rates they charge: “How can you pay that much for a haircut?”

Quite simply, top hair stylists have great taste, and you can’t put a price on that—either you have it or you don’t.

While they know what’s fashionable, they’ve also mastered classic hairstyles and precise cutting techniques. They can tell right off the bat whether a haircut will work for you based on your face shape, the texture of your hair, and the direction of your hair growth. If you insist on a particular style that they know won’t work for you, they will gently guide you toward the light.

Point of no return

Back to my haircut. The stylist hacked away at the hair near my nape. I swallowed hard, knowing that the shorter he cut it, the more difficult it would be to fix.

When he was done, I looked like Bea Alonzo in “One More Chance,” which came out in 2007.

I looked dated, not dateable. So much for V-Day plans!

I went back to the office so I could have company while surveying the damage. Reactions ranged from “Yikes!” to “You look like Victoria Beckham in the early 2000s.”

It got worse. The next day, while waiting for my hair to air-dry, the hairs at my neck dried upward instead of outward. It was a mess! My hair wasn’t layered so much as butchered.

Salvation is not free

I booked an appointment with Henri Calayag. I had never been to his salon before, but he cuts my editor Ria Prieto’s hair and she has never had a bad hair day in her life. (She never gets a blow-dry either.)

I walked into Henri’s salon with my hair in a ponytail. After the shampoo, he went up to me and asked, “So what are we doing today?”

He balked and asked: “Why are you bringing this to me? And it’s still so short! You should have waited for it to grow out. When did you get this?”

I knew that I deserved this light scolding. I looked down sheepishly. “Three days ago,” I answered.

He went on: “Why didn’t you bring it back to the salon that gave you this cut?”

I explained that I felt that the stylist’s skills just weren’t up to par, and I needed a miracle. I showed him a photo I took of my hair after it air-dried.

His face softened. “Umiyak ka?” he asked. It was that bad.

He ran his fingers through my damp hair and said many clients would try out a different salon, regret it, then ask him and his team to do damage control.

Put yourself in his shoes. No stylist wants to be fixing a botched cut—they want to give you the hairstyle that you should’ve gotten in the first place.

In the end, Calayag gave me a modified inverted bob. The layers in the back were refined, and though the front was longer, it wasn’t drastic.

At first I felt a little hesitant, but when I washed my hair two days later, I realized that I had done the right thing.

When it air-dried, the ends went outward, so it looked piecey and textured. Most importantly, my hairstyle didn’t look dated or trendy—it just looked good, and went well with my new hair color by L’Oréal Professionnel.

Before I left, Henri told me to grow out my hair and come back to him so he could give me a proper cut. As someone who rarely goes to the same hair stylist twice, I can’t wait to see what he will do next.