The boys of the barricade | Inquirer Lifestyle ❮ ❯ 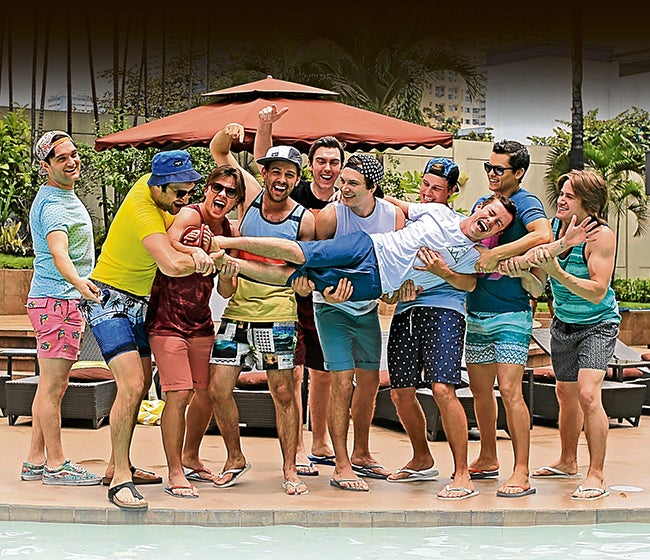 The boys of the barricade

Onstage in Cameron Mackintosh’s “Les Miserables” currently running at The Theatre at Solaire, the Barricade Boys, played by some of the actors in the ensemble, are students who call themselves “Friends of ABC” (pronounced “Abaisse”), who seek the elevation of humanity.

On March 30, a scorching hot day, the band of brothers put down their guns and strutted in summer picks from Penshoppe, Regatta and Coco Cabana from SM Men’s Fashion at the poolside of Diamond Hotel in Manila.

Inquirer Super had a quick chat with nine guys from the ensemble of “Les Miserables.” 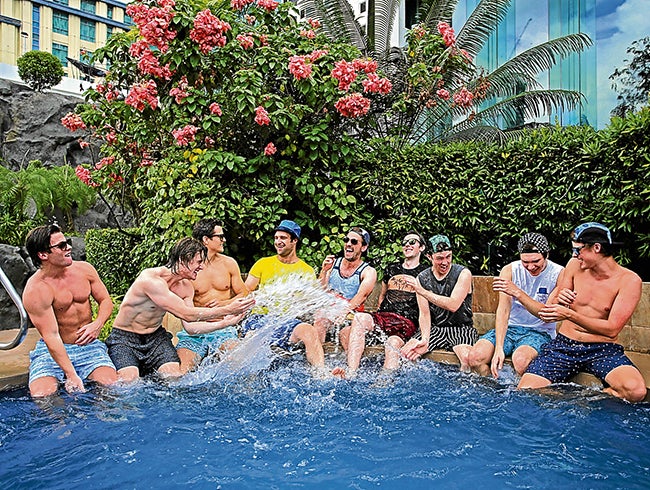 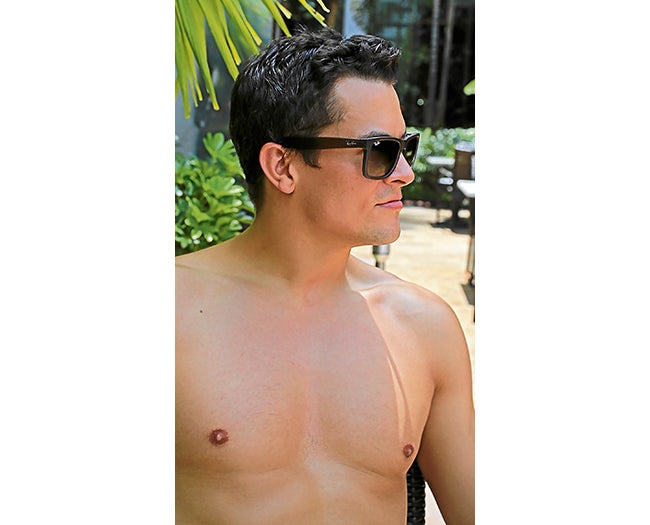 Chris Durling plays Enjolras, leader of the revolutionaries. Like the character he plays, Durling has a cherubim’s face. When Super asked him to pose topless, he first did a couple of pushups before facing the camera.

Asked what the French writer would have thought about the adaptation of his book for the stage, Durling said Hugo “would love it. It has such wonderful and timeless music. The creatives have updated this new production. They’re using projections, as audiences today want to see something visually spectacular. I think Victor Hugo would be very proud.”

Durling was nominated for the Helpmann Award for Best Male Actor in a Supporting Role in a Musical for his role in “Les Miserables.”

Hugo Chiarella plays Grantaire, the skeptic “who took good care not to believe in anything.” The musical theater major is also a writer, performer and producer in “I’m With Stupid.”

A week after the November 2015 Paris terrorist attacks, Chiarella wrote an article, “Paris: Reexamining ‘good’ vs ‘evil,’” published on the online magazine The Big Smoke, in which he noted the similarities between that recent incident and “Les Mis.”

“But as I experienced Victor Hugo’s story unfold and took in the lyrics—‘The blood of the martyrs will water the meadows of France’—I found myself troubled by some of the parallels that were jumping out at me,” said Chiarella.

Tamlyn Henderson, who plays the factory foreman, was also a writer-performer in “Porthole into the Minds of the Vanquished.”

He said that he has grown fond of eating kare-kare, and that his favorite “Les Mis” scene is when Valjean sings “Bring Him Home.”

Tom Vincent plays Jean Prouvaire, the romantic in the group. He said the Filipino audience is very warm to the ensemble: “The audience is extremely appreciative. Every single night they give us standing ovations, applause.”

Ciaran Joyce likewise loves the Filipinos’ warm reception to “Les Mis.” Joyce plays Montparnasse, and was also cast as a young Gavroche. “The energy of the Filipino audience makes it easier to start the show,” he said.

At age 22 he has won several awards including the Queensland Performing Arts Competition for Music Theater and the Griffith Award for Academic Excellence from Queensland Conservatorium, both in 2014.

He said that his favorite part in “Les Mis” is the barricade scene: “Every night, we would be doing the barricades. I get to handle guns, and head to war with my buddies. We have a whole bunch of fun with this magnificent set and stage.”

Nigel Huckle has a tattoo on his left bicep that says, “And rain will make the flowers grow,” from the song “A Little Fall of Rain.”

Huckle, who plays Feuilly, noted the importance of the ensemble in the production of “Les Mis.”

He said that the musical “is such a hugely ensemble-driven show that really requires the whole cast to be on full energy the whole time. It’s really amazing to work with a cast and crew that’s so together all the time.”

David Francis, who plays Claquesous, said it is very exciting to be part of the ensemble: “The finale of Act One, ‘One Day More,’ is my favorite. I think it’s probably the best finale to any musical.”

Oscar Tollofsen, who is cast as Courferyac, marks his professional musical theater debut in “Les Mis.”

He said, “The best thing about it is that it’s the biggest show—I think it’s one of the best musicals—and it’s really a dream come true working in it.”