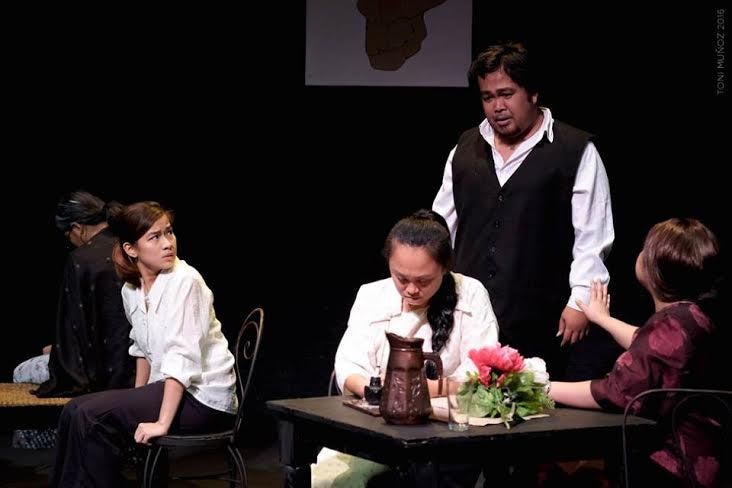 Tanghalang Pilipino’s (TP) two-performances-only staging of the Anton Chekhov classic “Uncle Vanya”—now “Tiyo Vanya” with a Filipino translation by the peerless Rolando Tinio—was billed as a “recital” by the TP Actors’ Company, a culminating activity of sorts for their script analysis class under Dennis Marasigan.

Well, then, if only recitals were always as movingly acted and perceptively staged as this undeservedly short-lived production. As the theater calendar heads into the lull of summer workshop season, the sensible next move for TP would actually be to take a long second look at its next season’s lineup and ensure this “Tiyo Vanya” gets its glowing spot in there.

After all, how often do we see Chekhov on our stages? Early last year, we had Philippine Educational Theater Association’s “Arbol de Fuego,” Rody Vera’s superb adaptation of “The Cherry Orchard,” directed by Loy Arcenas and starring Cherie Gil as a Negrense plantation heiress on the brink of bankruptcy.

But then you’d have to go back almost three years to find another major Chekhov: Dulaang UP’s “The Seagull,” which was presented in both English (with the sublime Ana Abad Santos taking charge as the faded actress Arkadina) and Filipino (utilizing another of Tinio’s indispensable translations).

Visits by the Russian playwright on our shores ought to be moments of celebration then, especially when done right—the tragicomic elements that mark his works thoughtfully and thoroughly fleshed out.

Charles Spencer, who for the longest time served as chief drama critic of the London-based The Daily Telegraph, often wrote that in the best productions of “Uncle Vanya,” “you seem to be watching the apparent random flow of life itself rather than a carefully meditated work of art.”

One could say this about the best moments in TP’s “Tiyo Vanya,” whose focus seemed shafted toward tragedy. The dacha where Chekhov’s Russian aristocrats roamed now seemed a ruthlessly sunless place, a remote, rundown estate where the hopeless gathered to rue the day.

The sense of ennui and regret hung thick in the air: These people were either so bored with their lives, or sick and tired of living. It’s an illness that affected everybody, but more prominently the men—Jonathan Tadioan’s brutish, blundering Vanya; Marco Viaña’s charismatic but cynical Doctor Astrov; and JV Ibesate’s egotistical Serebryakov.

Their women, in turn, bore the brunt of their blistering behavior: Antonette Go, steely in her silence as Yelena, the subject of both Vanya and Astrov’s maddening affections; and Doray Dayao as the homely Sonya, whose love for Astrov goes unrequited.

That is to say, the world conjured in this “Tiyo Vanya” is a product of superb ensemble-playing, almost every performer finely attuned to the movements and language of the rest (the unfortunate glaring exception being guest artist Christine Penserga as Vanya’s mother; she seemed to inhabit a world of her own).

An even bigger reason, then, why this “Vanya” deserves a longer life: How often do we get to see a so-called Actors’ Company actually become a genuine “actors’ company”?

Those of us who’ve tirelessly followed the theater scene for at least the past four years have seen these actors in a myriad of shows and roles, all the way to TP’s latest hit, the splashy historical romp “Mabining Mandirigma.”

In the piercing quiet of this production, it was as if each one now lived under each other’s skin—acting as a whole, their rhythms familiar, their presence no longer discrete and disparate. They’ve come a long way, this actors’ company, and it showed in “Tiyo Vanya.”

However, that it ran for only a day meant very few people saw it—and isn’t that a great tragedy?

E-mail the author at [email protected], or visit him at www.vincengregorii.blogspot.com.