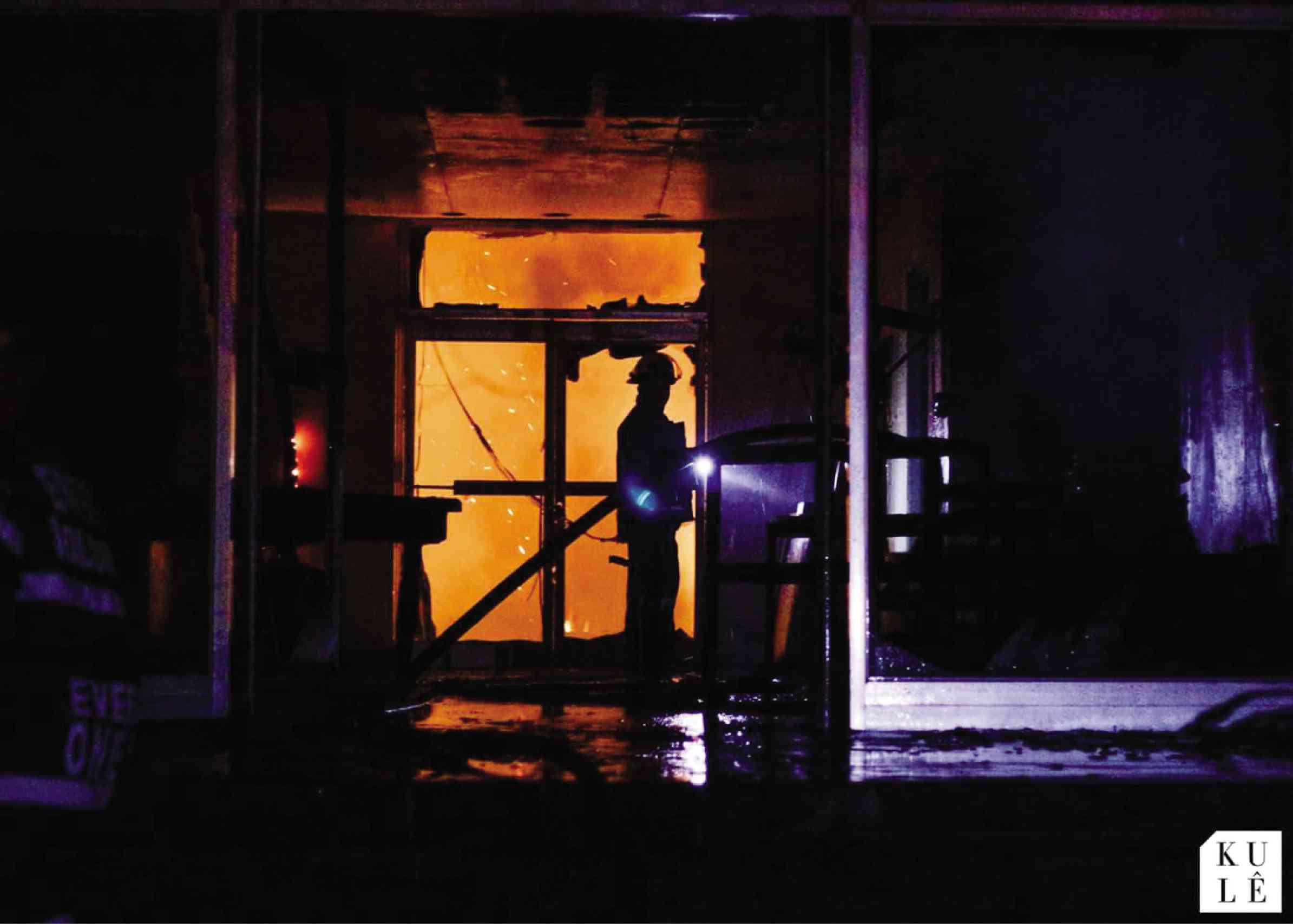 PHOTOGRAPH of a fireman in the UP Faculty Center studio, posted on Facebook by playwright and UP alumnus Floy Quintos

A Philippine theater legacy goes up in flames

On the last day of Fire Prevention Month, a young assistant professor at the University of the Philippines had a strange but nagging feeling that something bad would happen.

Hours later, Santos, associate artistic director of Dulaang UP, the university’s official performing troupe, attended a meeting in the office of a female colleague in the decades-old UP Faculty Center, fondly referred to as FC by students, alumni and professors.

Santos noticed a charming old rocking chair. His friend said it belonged to a retired professor.

Later that afternoon, Santos went to another faculty member’s office in the same building. After their chat, he noticed two framed sketches—“an angel and a head of a male saint.”

Santos then went to meet some friends. He still had some business to do at the FC but decided to return another time. After all, the papers he needed to work on would just be there.

The next morning, Santos wished the Facebook message was just a mean April Fool’s joke. The recipient of his ominous message the day before wrote back that FC had been ravaged by fire.

UP Chancellor and Inquirer columnist Michael Tan looked anguished when he faced reporters in an ambush interview early Friday morning.

Tan managed to say it succinctly when he pointed out that more than the loss of the building itself, the tragedy of the fire is “more about the memories” that also went up in smoke.

It is highly improbable for any student at UP Diliman not to have set foot inside FC.

It was here that a student consulted with a professor on class requirements, and where he or she went to claim the bluebook of the past final exams and class cards.

On some occasions, FC is also where a student would stake out a professor to plead for special consideration if, for some reason or another, he/she couldn’t enlist in the teacher’s class during regular enrollment.

There were also special exams held at FC. This writer once witnessed an elocution contest in Spanish where three male students outdid each other in reciting “Mi Ultimo Adios” in front of a bored-looking professor.

Just last year, a fire hit the College of Arts and Sciences Alumni Association (CASAA) food center. Many bemoaned the destruction of the popular student hangout, but FC is different.

In a phone interview, Dean Amihan Ramolete of the College of Arts and Letters said the damage would be hard to quantify.

While the building housed 250 offices of professors from five departments, as well as the Institute of Creative Writing, the university also lost “a lot of historical documents, cultural artifacts, original theater scripts and photos,” she said.

Ramolete, associate artistic director of Teatrong Mulat ng Pilipinas, explained that, aside from teaching, many of the professors “are researchers or artists so there are works, a lot of artistic works plus reference materials. There are also historical books, hard-to-find books, it’s so difficult to quantify. The loss is so difficult to express.”

Professor Emeritus Tony Mabesa and Professor Alex Cortez joined Ramolete at the adjacent Palma Hall hours after officials declared “fire out” inside the UP campus.

“She lost her office. We are now at the Dulaang UP office right across,” Mabesa whispered over the phone.

Mabesa himself was grieving the destruction of Tanghalang Hermogenes Ylagan, housed at FC. (Inquirer contributing editor and occasional Dulaang UP actor Alya Honasan noted that the theater, also known as the FC studio, is home to the UP Playwright’s Theater, where works of homegrown playwrights like Floy Quintos and Nick Pichay are premiered. The venue is where readings and rehearsals begin before a play is staged at the bigger Wilfrido Ma. Guerrero Theater in Palma Hall.)

Mabesa, a Philippine theater icon who is also a film and TV thespian, said he learned about the fire, while on a seminar in Clark, from the Dubai-based mother of one of his stage actors.

“He said, ‘Check Facebook.’ Lo and behold! Alex noted the sad fact that all the archival treasures of Dulaang UP have gone with the wind,” Mabesa said.

Cortez said the fire destroyed everything in his office. “All my Dulaang UP files, all memories of 40 or so years are gone,” he said.

He still works as a professorial lecturer after retirement and feels fortunate that the university allowed him to keep the office where he kept all hard copies that documented his life and experience in theater.

“All my things were already in boxes because supposedly they would be transported to the archives. All the programs from 1976 to the present of both Dulaan and the UP Playwright’s Theater. I am really so devastated,” he said.

Cortez has been serving as de facto archivist of Dulaang UP: “I don’t throw away things. I have complete research materials so this is really very sad.”

Cortez noted that through those years, FC served as haven for budding artists as well as professional actors from TV and film.

“We lost a sanctuary of sorts.  That’s really painful because of all the memories you cannot recreate,” he added.

The fire could not have come at a worse time. Cortez and company are supposed to close the current 40th season with “The Dressing Room.”

Turning wistful, Cortez said, “Gan’un talaga ang mga pangyayaring hindi inaasahan.  Now we have to be more careful. Unfortunately, we are not sophisticated when it comes to storing things, so now we have to start filing all these precious things in digital format.”

What Cortez would probably miss the most were the costumes for the “Noli Me Tangere” production designed by Gino Gonzales.

“The materials were from Irene Araneta. That’s inabel.  Magaganda ’yun! They were here at FC because we didn’t want them included in the morgue of theater props. A lot of sentimental things! Very, very sad.”

While Cortez and Mabesa lament the loss of Teatro Ylagan, young professor Santos is devastated by the loss of his books. “Sobrang dami. Maraming libro na binili ko ever since I was a student,” he posted on Facebook.

Also gone were the bound copies of theses from students (including that of successful alumni like actor Eugene Domingo), VHS tapes, VCDs, DVDs, newspaper clippings, souvenir programs “from 1995 till the present,” added Santos.

“Everything has turned into ashes. I have been teaching for 11 years… paano pa kaya ang ibang senior faculty?” he asked.

Santos added he was disturbed upon realizing that the precious photographs and videos of old Dulaang UP productions stashed in Cortez’s office are all gone.

In the meantime, social media continues to fill with posts from those whose memories of FC are now blurred with ash.

Dulaang UP regular actor Leo Rialp posted a one-liner: “The womb of UP’s theater has been incinerated and its memory deleted.”

Floy Quintos, who counts many plays premiered at the  Tanghalang Hermogenes Ylagan for the UP Playwright’s Theater, posted a haunting photograph of a fireman silhouetted against the flames outside the studio. It was accompanied by these poignant words:

“A strangely apt photograph that says it all about what regularly took place in this very space, from the late 1970s up to only two weeks ago. The Tanghalang Hermogenes Ylagan was the rehearsal space for every Dulaang UP production, performance space for UP Playwright’s Theater and Dulaang Laboratoryo productions, and classroom for most theater arts courses. Every play I have written has been rehearsed here, every theater friendship I treasure has been forged here, every intangible family tie I value has been nurtured here.

“How apt that the last play rehearsed here, ‘The Dressing Room,’ is about theater ghosts reliving their nostalgia. And true to the nature of the theater, the show opens next week! So, while it is a very sad photograph, I choose to see it as a reminder of the incendiary nature of the theater we all made in this space. The flames may have consumed everything, but the fire in our hearts will not go out.”