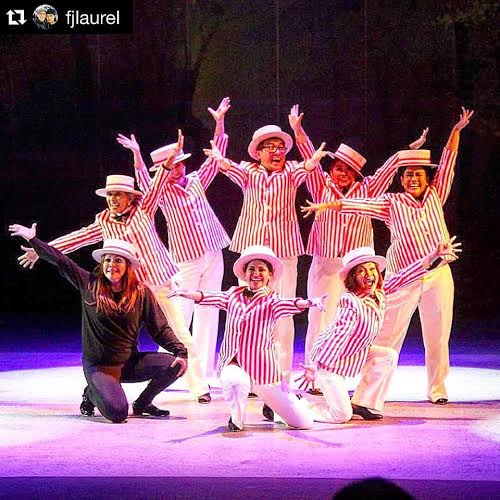 Repertory Philippines’ “Stepping Out, The Musical,” ongoing at Onstage Greenbelt 1, Makati City until April 24, is directed by Jaime del Mundo with set design by Miguel Faustmann. PHOTO BY FRANCO LAUREL

Age-defying feats in ‘Stepping Out’ and ‘Kalantiaw’

It would be gratuitous to begrudge the currently running Asian touring production of “Les Misérables” its unequivocal success at The Theatre at Solaire, where it plays to sold-out crowds eight shows a week. Its design elements alone—the ravishing incorporations to the brand-new 25th-anniversary staging upon which this tour is based—make it worth the expensive look.

But if you’ve seen or are planning to see “Les Mis,” then certainly you can spare some time to check out the two homegrown productions brave enough to run alongside this foreign juggernaut.

Even better, they can very well hold their own against Cameron Mackintosh’s musical in terms of the sheer talent and imaginative caliber they showcase.

Both these shows—Repertory Philippines’ “Stepping Out, The Musical” and Tanghalang Ateneo’s “Kalantiaw”—opened last week to little fanfare. Yet, they make Jean Valjean’s zippy (and occasionally unconvincing) excursion through the aging process look like catnip.

A gaggle of women and one man who meet once a week at a tap-dancing class are the stars of “Stepping Out,” written by Richard Harris based on his original nonmusical version of the play, with largely forgettable songs that do serve their function in character exposition and narrative propulsion (music by Denis King, lyrics by Mary Stewart-David).

Miguel Faustmann’s set design literally expands the stage of Greenbelt’s Onstage Theater sideways, and the deliberately low-rent furnishings effectively give this make-believe dance studio a beat-up look. (There is also a bar scene wittingly lifted straight off the pages of “Miss Saigon.”)

Still, on paper, “Stepping Out” sounds like an alternating leisurely walk and trudge. There isn’t anything remarkable with its story—motley crew of old and young Britons prepare for a community presentation—nor are its characters interesting or novel enough to really sustain our attention. And the conflicts do tend to feel contrived.

It’s the cast assembled by director Jaime del Mundo that provides zest and zaps of energy to the otherwise middling material, and keeps the audience glued to the proceedings all the way to the slightly scintillating surprise at curtain call.

Del Mundo, one of the few who can whip a production to opening-night perfection by its first performance, here gives us a delectable panoply of some of local musical theater’s finest actresses (plus an appropriately subdued Raymund Concepcion) working in crackling cohesion as an ensemble.

Some, like Cara Barredo and Natalie Everett—reliable Rep regulars—manage to supply dimensions to their blandly written characters. Others finally get to sink their teeth into roles worth their weight, such as Angela Padilla, a last-minute addition to the cast, who plays the group’s dance instructor with beautifully understated authority.

And then there are the grand dames of Philippine theater, the likes of Joy Virata, Bituin Escalante and even the comebacking EJ Villacorta, who voraciously pounce upon their parts and every so often threaten to walk away with the show.

Here they play women of a certain age who have discovered the rejuvenating powers of dance, and their performances can definitely teach the younger generation a thing or two about comedic timing, line delivery and body language.

They light up every single scene they’re in, whether with just a perfectly timed retort to a harmless “hello,” as in the case of Virata, who hasn’t had a role this good since “Mind’s Eye” a few years back; or a bombastic song number that literally screams “bootylicious,” as in Escalante, who plays a vaguely Black or Caribbean woman with a winning accent.

Their characters may be well past their prime, but look how they’re claiming this newfound youth with aplomb. Truly, the body may wither, but the spirit remains a child, and talent, their storied theatrical arsenal, is ageless.

The reverse takes place in “Kalantiaw”: a scrappy band of university students aging themselves so convincingly, in a play that grabs at you in unexpected ways.

If we’re being clear-eyed about it, it wouldn’t be baseless to proclaim this production Tanghalang Ateneo’s best since its electrifying take on Han Ong’s “Middle Finger” two years ago.

But really, it’s amazing what wonders a small student-run show can achieve with so little, and in a span of just over an hour. In fact, “Kalantiaw,” a 1994 Palanca winner by Rene Villanueva, owes much of its dramatic heft and potency to its brevity.

The topic: a famous hoax that marred our history books for some time, the infamous Code of Kalantiaw, which was passed off by one José E. Marco as a landmark anthropological discovery akin to that of the Code of Hammurabi. It has since been proven fake, and “Kalantiaw” imagines an unnamed young historian unearthing the truth through a mesmerizing blend of history and drama, past and present, fact and fiction.

What the play asks its audience are questions that still pound the heart with burning relevance, especially now with the coming national elections. Historical revisionism and the shameless vandalizing of our past, for example—as well as notions of history as the product of a people’s choices, as the version of the mighty, or as an ongoing story reflecting a way of life —ring with clarity here, as if they’re being proposed for the first time.

It’s one of the many pleasurable achievements provided by Charles Yee’s direction that “Kalantiaw” literally screams “Theater!”—this enthrallingly stylized production marking out its young director as primed for the big leagues.

The set designer is Ed Lacson Jr., who, with just tons of paper, transforms the stage of the Ateneo’s Rizal Mini-Theater into a wasteland where falsehood and confusion loom high. (The lampposts, he reportedly built out of illustration boards— school materials for this quick history lesson?)

Together with choreographer Gio Gahol, lighting designer Meliton Roxas Jr. (his brown and sepia tones adding years to this show’s look), costume designer Carlo Pagunaling (history personified as a woman wrapped in a papery gown, anyone?) and sound designer Jeff Hernandez, Yee and Lacson craft spellbinding tableaus out of crumpled paper and bodies floundering and falling.

The cast thankfully live up to the challenges imposed by this slyly cerebral production. In particular, John Sanchez and Brian Ramos are completely believable as José E. Marco and the young historian, respectively, each one an equally commanding presence onstage. And Yvonne Ricaro (as Marco’s wife) and Jonnel Inojosa (as the old historian) raise the bar even further in this age-defying act.

It goes without saying, then, that “Kalantiaw” is a celebration of everything that theater represents: ingenuity, imagination, panache where it matters, and that rare ability to overcome so many odds (foremost of which is a script swirling in lyrical, formalistic Filipino)—compelling reason, really, why local theater deserves as big an audience as those visiting denizens of the barricades at Solaire.