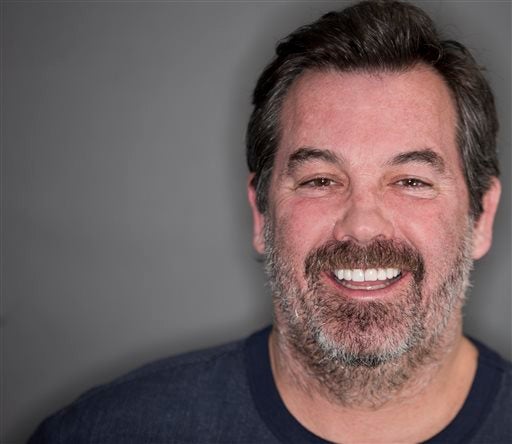 Duncan Sheik poses for a portrait on Thursday, March 24, 2016, in New York. Sheik is ready to let Broadway audiences hear how he turned the provocative 1991 novel, "American Psycho," about a psychopath into one of the season's bravest pieces of musical theater. It opens April 20. (Photo by Brian Ach/Invision/AP)

NEW YORK— The first time Duncan Sheik read the disturbingly gory novel “American Psycho,” it didn’t go well. He got halfway through the book before throwing it across his dorm room in disgust.

“I remember being, frankly, kind of off-put by the style and the tone of the book and obviously the violence was just very hard to read in my tender, 21-year-old soul at the time,” the singer-songwriter said.

Some two decades later, he was urged to try again by producers hoping to turn it into a musical. Sheik bought another copy of Bret Easton Ellis’ book ahead of a trip to Japan. This time, he kept it.

“I was completely absorbed by it and completely amazed by how prescient Bret Easton Ellis had been in this crazy story that he had written. He kind of predicted so much of where the culture was headed,” said Sheik, who wrote the music for the Tony Award-winning “Spring Awakening.”

Now Sheik is ready to let Broadway audiences hear how he turned the provocative 1991 novel about a psychopath into one of the season’s bravest pieces of musical theater. It opens April 20.

“Even though it’s violent and it’s bloody, it’s also beautiful and really avant-garde and really cool,” said Sheik, who grounded the musical’s sound in electronic dance music of the era.

The story centers on yuppie serial killer Patrick Bateman who is obsessed with high-end clothes and beauty products as he slashes his way through Manhattan. Christian Bale starred in the 2000 film version.

“The book really is an allegory to me. Patrick Bateman is an avatar of a lot of impulses that happen to a lot of people in our culture, including myself,” said Sheik, a Buddhist who bikes around the city and whose new album is the terrific “Legerdemain.”

“I see these incredibly materialistic sides to myself and this weird judgmental and non-compassionate part of my being. It’s part of the human condition. We all have it to some extent.”

Sheik, a Brown University graduate who had the 1996 hit song “Barely Breathing,” channeled the music he heard getting past the velvet ropes of trendy, late-1980s Manhattan clubs such as Tunnel and Nell’s.

For one standout song, “You Are What You Wear,” he even reached out to old girlfriends to ask a question: What were you really into wearing in the late ’80s? He put the answers in the tune about high fashion that rhymes Giorgio Armani with Norma Kamali.

The result is producer Jesse Singer’s favorite song from the musical and proof of how playful and clever Sheik can be. “Duncan is really a genius and an intellectual and brings something both uniquely his but importantly of this period to the stage,” said Singer.

Because Bateman — played onstage by Benjamin Walker — is an armchair music critic who likes Huey Lewis and the News and Phil Collins, Sheik also peppered his score with sly reworkings of “In the Air Tonight” and “Hip to Be Square.”

The show, directed by Rupert Goold and with a story by Roberto Aguirre-Sacasa, made its premiere in late 2013 at the Almeida Theatre in London. The version in New York will be much wilder.

“We were all sort of worried that it might be too violent for people and it might seem too misogynist,” said Sheik. “But, in fact, the truth is this piece is a critique of a certain way of thinking about things. So in truth it’s better to go all-in.”

He even got a chance to ask Ellis whether the craziness that Bateman gets up to is really happening or is just in his head. “Brett would not answer the question because I think he wants it to be really ambiguous,” Sheik said.

Either way, Sheik is hoping his brash soundscape for “American Psycho” does the same thing his fresh songs for “Spring Awakening” did a decade ago: Attract new audiences for something bold onstage.

“I feel like it’s become my project to kind of drag different people who might not normally go to musical theater pieces to come see a piece of musical theater,” he said. TVJ