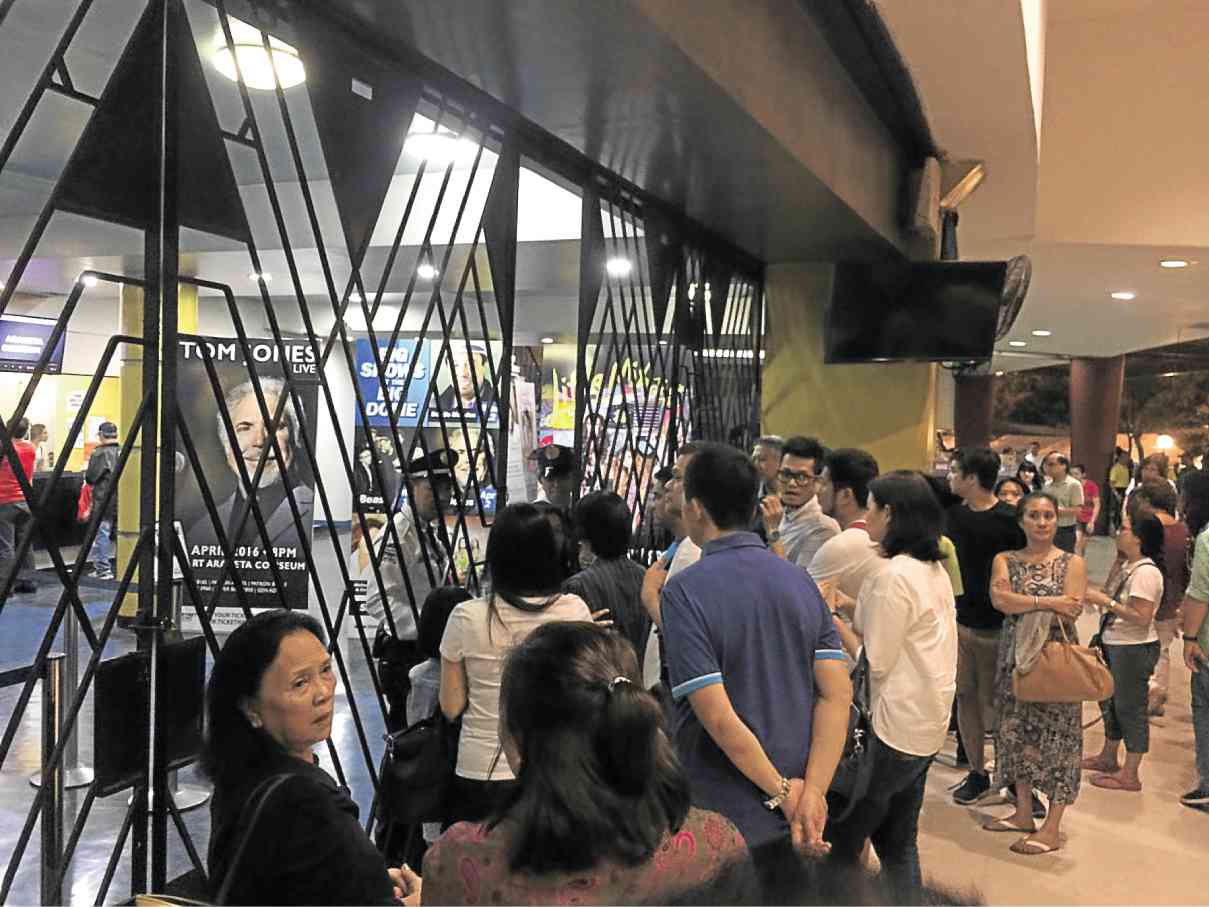 A WEEK after Tom Jones unexpectedly canceled his Manila concert at the Smart Araneta Coliseum—as well as six other shows overseas—people are still wondering who among his “immediate family” was suffering from “serious illness” that, according to a source affiliated with the concert promoter, caused him to be distraught and apparently unable to perform.

On the other hand, a number of his Filipino fans who bought tickets couldn’t contain their anger upon learning that the show had been called off. What triggered their displeasure was the inconvenience caused by the last-minute cancelation.

Many of them had traveled from Tarlac, Pampanga, Baguio and other provinces, according to a member of the Coliseum security staff, who told Inquirer Lifestyle that long lines had already formed at the gates, which were about to be opened around 6:30 p.m., when they were informed of the cancelation.

The hardest ones to appease, said a police officer assigned to the venue, were those from the provinces, who were demanding to be refunded that same night. There was even one who was said to have flown in from Hawaii just to watch the show.

As to whether or not Jones had been unprofessional, concert promoter Renen de Guia of Ovation Productions replied, “I can easily agree with you, especially since he has done this to us twice in a row! What a waste of time, effort and resources! He should have just continued with the show since he was here already; that was also our thought. But this is beyond professional or unprofessional. TJ was really distraught, and would have been unable to perform.”

For tickets purchased at TicketNet outlets and the box office, refund is available until May 5, daily, 10 a.m-8 p.m. at the TicketNet office, Yellow Gate, Smart Araneta Coliseum, tel. 9115555.

For tickets purchased online at ticketnet.com.ph, refund will automatically be reverted to the credit card of the ticket buyer.

The best thing to happen to the Araneta Center lately is the opening of Novotel, an international hotel chain, right next to the Big Dome.

Finally, there’s a decent hotel to stay for local and foreign tourists in the area.

On the night of the canceled Tom Jones gig, we spent time at Novotel to sample its facilities.

Its pool and lounge bar on the sixth floor is a good place to hang and have some drinks. The staff is friendly and accommodating, eager to please, especially when some food items on the menu are unavailable.

A DJ plays dance and upbeat music on weekends.

The Food Exchange on the ground floor serves a delectable brunch (P1,500 per head) of Filipino, Japanese, Italian and Indian cuisines—including fresh seafood and meat ready for grilling upon request.

The deluxe room (rates start at P4,250) has comfortable beds with chiropractic pillows and a nice view of the pool below.

Culture Club, the British band fronted by the flamboyant Boy George, has reunited with its four original members and is performing on June 17 and 18 at Smart Araneta Coliseum.

The question is, can its lead singer—whose real name is George Alan O’Dowd—still hack it, after years of struggling with heroin addiction?

Although this will be Culture Club’s first time to play in Manila, Boy George actually came here sometime ago to do a gig as a DJ. What we remember most from that show was the boredom of waiting for hours until he finally appeared onstage at 3 a.m.

But looking at recent videos of the band’s performances posted on YouTube, it seems Boy George has successfully bounced back.