A walkway on Edsa from Makati to northern Manila—why not? | Lifestyle.INQ ❮ ❯ 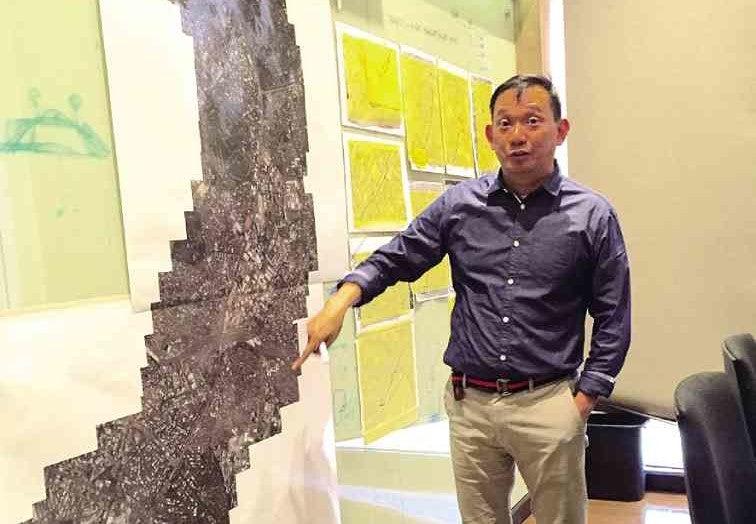 ARCHITECT and urban planner Dan Lichauco, principal partner of Archion Architects, uses amap of Metro Manila to explain how cooperation between government and business could save Edsa and turn it into a pedestrian- and commuter-friendly highway.

A walkway on Edsa from Makati to northern Manila—why not?

TRAFFIC along Ortigas Avenue in front of La Salle Green Hills was hardly moving, so architect Daniel “Dan” Lichauco decided to walk from his car to his house in New Manila, Quezon City.

Forty-five minutes and 6,000 steps later, Lichauco made it home to Balete Drive before his driver caught up.

Lichauco joked that he was more peeved that he did not reach the 10,000 steps required by a daily fitness regimen.

Lichauco is regarded as a maverick in the field of design. Just before Holy Week, he was invited to speak before construction and design professionals in one of the seminars at the “Worldbex 2016: Uniting Strong Foundations” event held at the World Trade Center in Pasay.

The topic assigned the architect—whose company is responsible for the construction of a number of private hospitals, residences and government buildings in the country—was Manila traffic. His talk was dubbed, “Dan Lichauco for President (Or MMDA chairman na lang): Urban Solutions for the Metropolis.”

Days before the seminar, Lichauco sat down with Inquirer Lifestyle and discussed his views about Edsa and Metro Manila.

“The design of Edsa doesn’t allow people to cross. It’s very hard for people to move from one side to another,” he observed.

He also noted that there is an oversupply of buses along Edsa during periods when these are not required. Fifty percent of these public vehicles, he said, do not even run on full capacity and only clog Metro Manila’s main road. Imagine each bus contributing a ton of deadly fumes to the atmosphere a year, the architect added.

Not only is Edsa very unfriendly to pedestrians and commuters with its smoke and sidewalk vendors. Also, the Metro Rail Transit   makes it difficult for pedestrians to cross Edsa; commuters must take the bus to reach a point that allows them to cross (most likely an overpass) and then take another bus going back to reach their destination.

Lichauco said the challenge for an urban planner confronted with Edsa is to think out of the box.

So, how about an elevated walkway on one side of the highway that undulates along the stretch from Makati to northern Metro Manila?

If a six-meter-wide walkway cooled by tropical plants and systems reliant on solar or wind power is constructed on top of the sidewalk, pedestrians would no longer have to endure the pollution, crime and other hazards happening below, he said.

To begin construction, Metro Manila Development Authority (MMDA) can convince mall owners to buy the air rights in front of their establishments. These owners would be allowed to include commercial establishments on the walkway—provided these do not intrude into the six-meter space for pedestrians and bikers. He also suggests washrooms at strategic points.

Lichauco said the ideas are not entirely novel. SM Megamall in Mandaluyong already bought the air rights over Julia Vargas Avenue before it built the skywalk that connects Building A and Building B.

And to imagine what a walkway would look like, Lichauco referred to the elevated path in SM North Edsa that has earned raves from customers.

Lichauco believes it is a win-win scenario. MMDA would not get into legal tussles with local government units since Edsa is a national highway. Mall owners get extra and unexpected commercial space, while pedestrians will enjoy a healthier and safer route, especially if law enforcers are visible along the walkway.

Lichauco said it would be realistic to expect a mall owner to consider the purchase of air rights in front of his property. It would be up to the owner if he wants to extend air rights to spaces beyond his mall and enjoy more business space.

The architect said the government can take over space whose air rights are not bought. In case it is the government that would have to construct the portion of the walkway in an area, Lichauco said monitors can easily spot overpricing, since construction expenses can be compared to those shouldered by the malls.

“Malls are matipid when it comes to that,” he noted.

The architect also suggested putting the walkway on the side of Edsa that accommodates more pedestrian traffic. In Makati City, for example, the walkway could be constructed on the southbound side where San Lorenzo Village is located, because it has more pedestrians than the Dasmariñas-Forbes side.

In Mandaluyong City, Lichauco said the Greenhills side may be the better location because it has more people than the Corinthian Village side.

The architect has another concern, however—that a significant count of Edsa commuters comes from nearby provinces and must endure three hours of traffic just to get to work in the big city.

Think of Greenfield along Edsa-Mandaluyong that has a terminal at the basement and commercial spaces on higher floors.

Lichauco said he had already discussed building structures in cities like Makati and Taguig that have terminals for public vehicles in the basement, commercial establishments on the lower floors and dormitories on the upper floors for province-based workers.

The buildings would be constructed on idle lands or in areas with one-story buildings at present.

Lichauco recalled a conversation with acting Makati Mayor Kid Peña in which the architect questioned the wisdom of giving away free housing to informal settlers.

Instead, Lichauco said, why not save half of these and convert them into dormitories for province-based employees working in the city?

“A worker can submit an employment certificate, have his boss vouch for good character and the city can have regular inspections. This means the worker must present proof he is really working in the city. And there should also be limits on how many persons can stay,” he pointed out.

Lichauco said it would be easy to persuade employers to shoulder the housing cost. After all, who doesn’t want employees coming to work alert and on time?

Lichauco added that housing restrictions are necessary since building systems are destroyed when they are overpopulated. Sewerage and sanitation, for example, are usually the first to go when a building hosts more than it can handle.

The architect also envisions Edsa as a canyon, with the two rows of buildings on either side as the land forms that tower over the road or “gorge.”

To transform Edsa into a self-sustaining ecosystem, the MMDA can require all owners of buildings along Edsa to arrange vertical gardens in the frontage of their properties. This way, not only would the plants help combat pollution, they would also contribute in making travel on the proposed walkways a pleasant experience.

In the meantime, local governments would do well to seriously consider electric buses to lessen the risk of respiratory diseases among constituents.

Of course, the government would have to show political will, a huge amount of discipline, and ensure private sector cooperation to make this all happen.

But Lichauco insists the proposal can be feasible.

“An urban planner’s job is to push the envelope. Let’s challenge the current thought that Edsa is hopeless or is only for cars. Think of Edsa as a spine we can connect to everyone, or as the longest shopping strip in the world,” he mused.