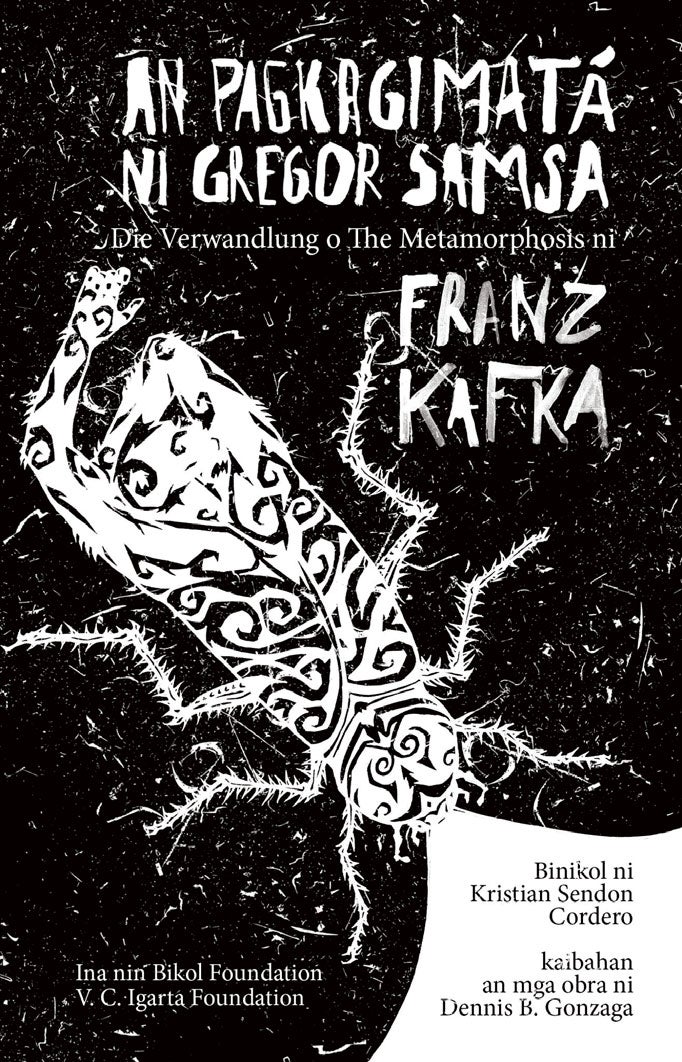 THE COVER of "An Pagkagimata ni Gregor Samsa"

FRANZ Kafka’s “The Metamorphosis” is one of the key modernist texts of the 20th century and one of the most debated by critics and literature lovers.

The novel’s protagonist is depicted as waking up one day as an insect, a reflection perhaps of the author’s feeling of alienation for a century that has now been labeled as the Age of Anxiety.

Some may argue the text’s polarizing effect may not necessarily equate to Kafka’s brilliance as a writer, but it remains the mindbender today as it was when it was first published over 100 years ago.

The book’s translation into Bikolano should open Kafka’s mind more to Bikol readers, all of whom should have their own viewpoints on the whys and wherefores of Gregor Samsa’s struggles from being the family breadwinner to becoming an object of disgust.

In translating the book from the German “Die Verwandlung,” award-winning poet-filmmaker Kristian Sendon Cordero took the liberty of changing the title to “An Pagkagimata ni Gregor Samsa,” or “The Awakening of Gregor Samsa,” as he especially wanted Bikol readers to experience “a kind of awakening that can all happen to us when we get so worn out with what we do and aspire to be.”

While “The Metamorphosis” is widely available in the Philippines, it was only last year that it was translated into Filipino.

“As a translator, I consider this translation of Kafka in the Bikol language as proof that literature remains to be the best bridge between cultures,” Cordero says. “Our goal is to bring these titles to the many Bikolano young people who are not enrolled in the universities like Ateneo, where English remains to be the language of instruction, hence, the privileged medium. We would like to reach more our young people whose language is Bikol. By providing them materials like these literary masterpieces, written and translated into their mother tongues, we hope to see more Bikolanos in the future who are proud of their respective languages and identities.”

“An Pagkagimata ni Gregor Samsa,” with illustration by Dennis Gonzaga, has been published through a grant from VC Igarta Foundation in New York through poet Luis Cabalquinto. It is copublished by Ina nin Bikol Foundation Inc., a church-based organization that promotes cultural literacy and spiritual maturity of Bikolanos, and the Ateneo de Naga University Press.

Kafka, who was born to a middle-class, German-speaking Jewish family in Prague, Czech Republic, has authored short stories and a few unfinished novels that have become part of world literary heritage.

Ambassador Olsa brought with him an exhibit about Kafka and the city of Prague, which was unveiled at the Fr. James O’Brien, SJ, Library.

“I hope that with this translation, new opportunities will open up for the Bikol language to continue to relate with the world of literature,” Cordero continues. The task of the regional translators is to push their languages to the limit.”

Cordero also received a grant from Sur, a program from the Ministry of Education and Culture of the Republic of Argentina, for the translation of works by Jorge Luis Borges.

He adds that Bikol translations of Oscar Wilde, Rumi, Geoffrey Chaucer, Shakespeare and José Rizal are also in the works.