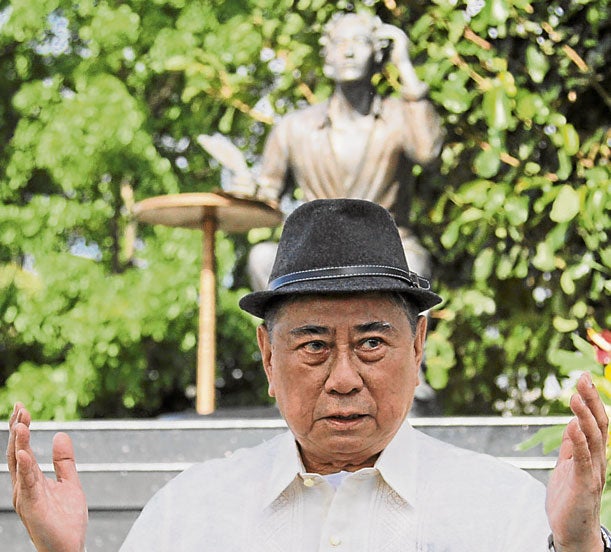 VIRGILIO Almario and Francisco Balagtas (at back) PHOTOS BY LESTER G. BABIERA

Komisyon sa Wikang Filipino (KWF) Chair and National Artist for Literature Virgilio Almario said they decided to make April the National Literature Month because it coincided with the birthday of Balagtas.

Balagtas is the author of the Filipino classic “Florante at Laura,” which, aside from being a required reading in high school, is also considered one of the greatest Filipino literary works.

Almario said the works of Balagtas, especially “Florante at Laura,” could be compared to the masterpieces of Shakespeare, Cervantes and Dante Alighieri that have withstood the test of time.

He also praised Balagtas for being an inspiration to heroes such as José Rizal, Andres Bonifacio and Apolinario Mabini.

He said he and his peers were pushing the government to recognize Balagtas as a Filipino hero.

He said the Philippines did not have a hero that would represent culture. He said the list of the country’s heroes was composed of martyrs, generals, presidents.

The launching of the Philippine Literature Month in Orion, Bataan, also coincided with KWF’s Kampo Balagtas, a national conference that aims to teach and train student writers as a movement to encourage the “development and enrichment of national literature.”

A total of 86 participants from Grades 7 to 11 from the Cordillera, Laguna, Metro Manila, Iloilo, Samar and Leyte attended Kampo Balagtas.

Poet Vim Nadera, activist Mae Paner and poet Michael Coroza participated in the event. Paner and Coroza took part in a balagtasan, in which they debated whether to blame the government or the public regarding the current situation of the country.

Aklatang Balagtas, a small library in Hardin ni Balagtas, was inaugurated on April 2.

National Literature Month is held throughout April. It is spearheaded by the National Commission for Culture and the Arts, KWF and National Book Development Board.