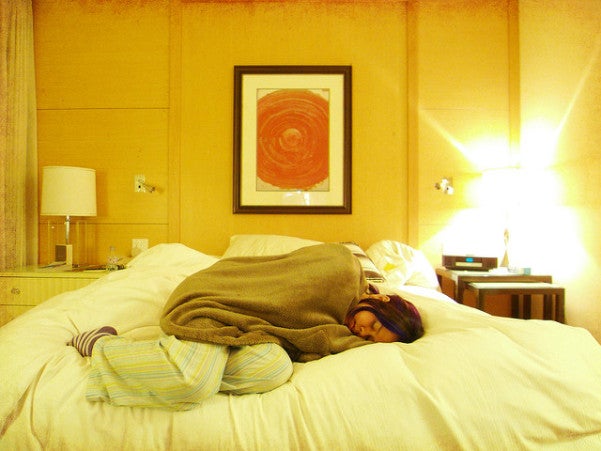 SOME days, depression will try to make you stay in bed all day. PHOTOS: PAM PASTOR

For weeks, people kept going up to me: “Wow, you’ve lost so much weight. What’s your secret?”

I usually ended up stuttering, going through a list of random answers: “Um, swimming?” “Less food?” “I don’t know.” And my favorite: “Lipo!”

But the truth was always on the tip of my tongue: “You really want to know the secret? Mental illness.”

Last December, after the strangest three or four weeks of my life, I was diagnosed with clinical depression and anxiety disorder. I was thrown for a loop. I didn’t see it coming.

I thought, depression is not something that happens to a happy girl who hates being sad, not to the grade school kid who called herself an eternal optimist, not to a person who shuns drama, not to a writer who likes turning problems into punchlines.

I was so ignorant. And I was so, so wrong.

But I was determined to fight it.

In the first few weeks of my depression, even before I was diagnosed, I had lost 10 pounds.

I just didn’t have the desire to eat. Even when I was finally able to force myself to sit down for a meal, I often stopped eating midbite. My body just refused food.

And when I started taking antidepressants, my medication killed what little appetite I had left. The pounds kept dropping.

When I was still trying to figure out what was happening to me, I read somewhere that you should do the opposite of what your depression tells you to do. And so, even before seeing a psychiatrist, that’s what I did.

On days when depression told me to stay in bed all day, I forced myself to get up and go out. It was harder on some days than others. But I persisted. I kept working. I went to the pool to swim. I had started swimming a few months before and I refused to let depression stop me.

As the days went on, that’s what I kept doing. I did not give in to the whims of depression and stubbornly kept moving. It was a    double-edged sword—not only was I defying depression, exercise is also really good for the mind.

When my Tito Owie first heard about my depression, he told me how important exercise could be: “Run on a treadmill. The endorphins will help.”

I did start running, but not on a treadmill—at Amoranto, around my neighborhood, and now, my favorite place for midnight runs, the UP Diliman campus.

Even on the busiest days, I would squeeze in a swim or a run between interviews, events and appointments. And because I am me, and I tend to overdo things, I overdid the running. I developed runner’s knee in just one week.

I thought resting it would be enough, but soon, my knee was so painful that I had to drag myself to the doctor. And I mean literally drag, because I was in so much pain that I could no longer walk normally.

The girl who used to refuse to work out actually had to go to a sports doctor for exercising too much. My friends couldn’t believe it. Neither could I.

The doctor gave me a long lecture on the importance of stretching and not overexerting myself and taking things slow.

And he told me not to run for at least two weeks. I groaned.

“But I don’t want you to stop exercising. Don’t lose your momentum,” he said. “Keep swimming. Try yoga. Or Pilates.”

For years, whenever people would tell me that working out can be addicting and that your body would look for exercise once you started, I rolled my eyes at them. Who in their right mind would get hooked on sweating when you can binge-watch “The Office” instead? But they were not lying.

Because when I was stuck in bed icing my knee, my body felt desperate for movement. And so I grabbed my phone and typed this into the search bar: “exercises you can do…”

I wasn’t done typing yet when Google auto-completed it to “exercises you can do in bed.” I was pleasantly surprised. That meant I wasn’t the only crazy person who wanted to work out while propped up on pillows! And I was even more pleased to discover that there are actually a lot of exercises you can do while comfortably horizontal.

I also went back to swimming as soon as my tattoo-induced chlorine ban was over.

As soon as my knee healed, I hit the oval again and started walking at first and then running.

On days when I couldn’t make it to the oval, I walked around the neighborhood or I wouldn’t ride the car and instead walk home from where we had dinner. It’s just important for me to stay active.

Depression wanted to keep me glued to the floor? Oh, hell, no. I was going to turn it into my personal trainer.

I started Pilates classes, too, something I never thought I would do. I went to Vivian Zapanta’s studio in BGC where my Pilates teacher Nina has been unbelievably patient. Sometimes Pilates felt more like an IQ test than a workout—an IQ test that my stubborn shoulders always failed and that I flubbed up with my confused breathing, but I like how it has been helping me get to know my body more and discover (and stretch) parts of it that I didn’t even know existed.

Exercise was one part of it.

When I started to suspect that I was depressed, one of the first things I researched was what changes I could make to help myself. I soon learned that diet makes an impact on your mental state. And so, whenever I could manage to eat, I tried to eat fish rich in omega-3 like tuna and salmon. I also started avoiding caffeine. It’s a good thing I’ve never been a big coffee drinker.

A few weeks after I started taking my antidepressant and anti-anxiety medication, I started eating more regularly. Still not as much as before, but at least I could actually feel hunger. My Lola Lydia played a huge part in that, cooking healthy dishes and packing vegetables and fruits for me to eat in the car when I’m in a rush.

The strangest part was realizing that I no longer craved the kind of food I liked eating before my diagnosis. I posted a photo of the surprisingly healthy contents of my grocery cart one day and joked, “The alien abduction continues.” Because it’s true. Sometimes, the big changes in my life have felt like an alien abduction.

Except for the two times that I turned vegetarian (once for almost a year and once for just 30 days), I never made a conscious effort to eat healthy. I liked fried food, I loved potato chips, I could never say no to sisig. But that has changed.

I asked my psychiatrist Dr. D: “Doc, it’s weird. I used to like junk food, fast food, unhealthy food. But now, just the thought of eating fries makes me queasy.”

“It’s possible that you were self-medicating with comfort food before,” Dr. D said.

My Tita Marie, a clinical psychologist in Seattle, agreed: “It makes total sense to me that you aren’t as drawn to high-carbohydrate food now that you’re on medication. It means you are in better balance, and that as your psychiatrist observes, you probably were self-medicating.”

She also wrote, “A lot of my work was with people with eating disorders and addictions. Often, people predisposed to binge-eating or drinking or drugging or gambling or sexcapades to excess are really responding to the body’s craving for something to straighten out the chemistry… It really makes sense to pay attention to diet as a way of treating the brain… When I would see your posts about the type of food you were promoting and enjoying eating, I actually was worried about what was going on for you health-wise.”

The girl who used to stuff her face without a care in the world is gone. Now, I eat mostly seafood and chicken, vegetables and fruits. I drink only water and fresh coconut juice with no sugar (I drink the juice and eat the meat of two fresh coconuts a day because coconut is really good for the brain. As are leafy green vegetables.)

I allow myself to eat pork or beef and have dessert once in a while, but always in moderation.

There are still a couple of things I can’t resist though— like my Lola Lyd’s lumpiang shanghai and anyone’s fishballs. I’m only human, after all.

When I first signed up for Pilates, there was a question on the form: “What is your goal?”

“To get healthier,” was my quick answer.

I have lost over 20 pounds since December. But I haven’t really been keeping track. Because that is not the point. Losing weight has never been the target of my lifestyle change. It has just been a bonus. I really just wanted to get healthier. I wanted to spit in depression’s face and say, “Look, bitch, I am stronger and in better health now than I was before you arrived.”

Life can surprise us in terrible ways. And the only thing we can do is spring our own surprises. By turning the bad into good. The roadblock into a springboard.