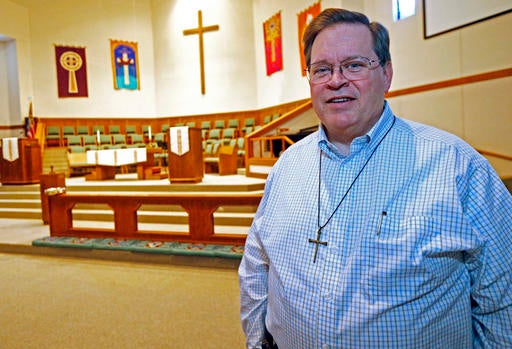 In this April 9, 2016 photo, senior pastor Warren Coile, of St. Mark's United Methodist Church poses for a photo in Brandon, Miss. Coile believes that the diversity of any church can be a strength-even if there are honest, passionate disagreements about strongly-held beliefs. Among the church's members are a same sex couple and their daughter, who often attend the same services as does Mississippi's Republican Gov. Phil Bryant, who recently signed House Bill 1523, legislation that will allow government workers, religious groups and some private businesses to cite deeply held religious beliefs to deny services to lesbian, gay, bisexual and transgendered people. (AP Photo/Rogelio V. Solis)

BRANDON, Mississippi — On many Sundays, conservative Mississippi Republican Gov. Phil Bryant can be found in the sanctuary at St. Mark’s United Methodist Church, almost always in his trademark suit and boots, often among those helping pass the offering plates.

In the same sanctuary — sometimes just a few wooden pews away — are Jan Smith and Donna Phillips, a same-sex couple who are also active in the suburban Jackson church and have a 9-year-old daughter named Hannah.

“Trust me — the dichotomy of Phil Bryant and Jan and Donna sitting in the same sanctuary isn’t lost on anyone,” said Ann Pittman, who has been going to St. Mark’s for 27 years. “As for me, I’m of the opinion that what two grown folks do on their own time is none of my business.”

The juxtaposition of beliefs at this church in the Deep South is a window into a debate in much of the U.S. that sometimes puts friends, neighbors and even fellow church members at odds. At St. Mark’s, members say the conversation is usually cordial, even if there are some uncomfortable moments at a church that has roughly 1,200 members.

St. Mark’s senior pastor Warren Coile believes the diversity of any church is a strength — even if there are passionate disagreements about strongly-held beliefs.

“I believe that God always comes down on the side of grace,” Coile said. “I hope that people here in our church do, too.”

The United Methodist Church welcomes gay and lesbian members into the church, but also says in its Book of Discipline that “the practice of homosexuality is incompatible with Christian teaching.” The denomination does not allow openly gay clergy or allow its ministers to perform same-sex weddings.

Coile said he’s comfortable with the church’s current position on homosexuality. He notes that both Republican former President George W. Bush and current Democratic presidential hopeful Hillary Clinton have a background in the United Methodist Church.

“We need to at least be able to talk to one another about (social issues),” Coile said. “Sometimes we’re at the point where we can’t even talk about it.”

Smith and Phillips are active in the children’s programs at St. Mark’s and Phillips is organizing Vacation Bible School this summer. They were among the plaintiffs in a recent lawsuit that resulted in a federal judge overturning Mississippi’s ban on allowing same-sex couples to adopt children.

Phillips called Mississippi’s recent legislation “disheartening,” but also said she tries to keep politics and church separate. She said she’s hesitant to get too involved in the debate because she doesn’t want to divide the church or make people feel like they must choose sides.

“St. Mark’s has been extremely welcoming,” Phillips said. “We’ve never felt there was an issue about the matter and immediately inserted ourselves in everything where we wanted to be involved.”

Becky Barnhill — a 32-year-old who has been going to St. Mark’s for about four years — said she’s never felt uncomfortable with expressing her opinion in the church, whether the topic is homosexuality or anything else.

“I think the diversity of the church is a good thing — it keeps everyone grounded and honest,” Barnhill said. “Personally, I’m against the House bill. But then I hear people saying that (Gov. Bryant) is some kind of bad person and that’s not my experience at all.”

Pittman said her own views on homosexuality have evolved since becoming friends with Smith and Phillips when they worked together at the church’s children’s programs. She came to the conclusion that “they’re just like everybody else.”

“I’ve never understood people getting so bent out of shape about what someone else does that doesn’t affect him,” Pittman said. “It’s not my place to say ‘You are wrong. You are going to hell.’ That’s up to God.

“I love Jan and Donna to death.” TVJ