‘Les Mis’ is the musical thrill of a lifetime–watch it! | Inquirer Lifestyle ❮ ❯ 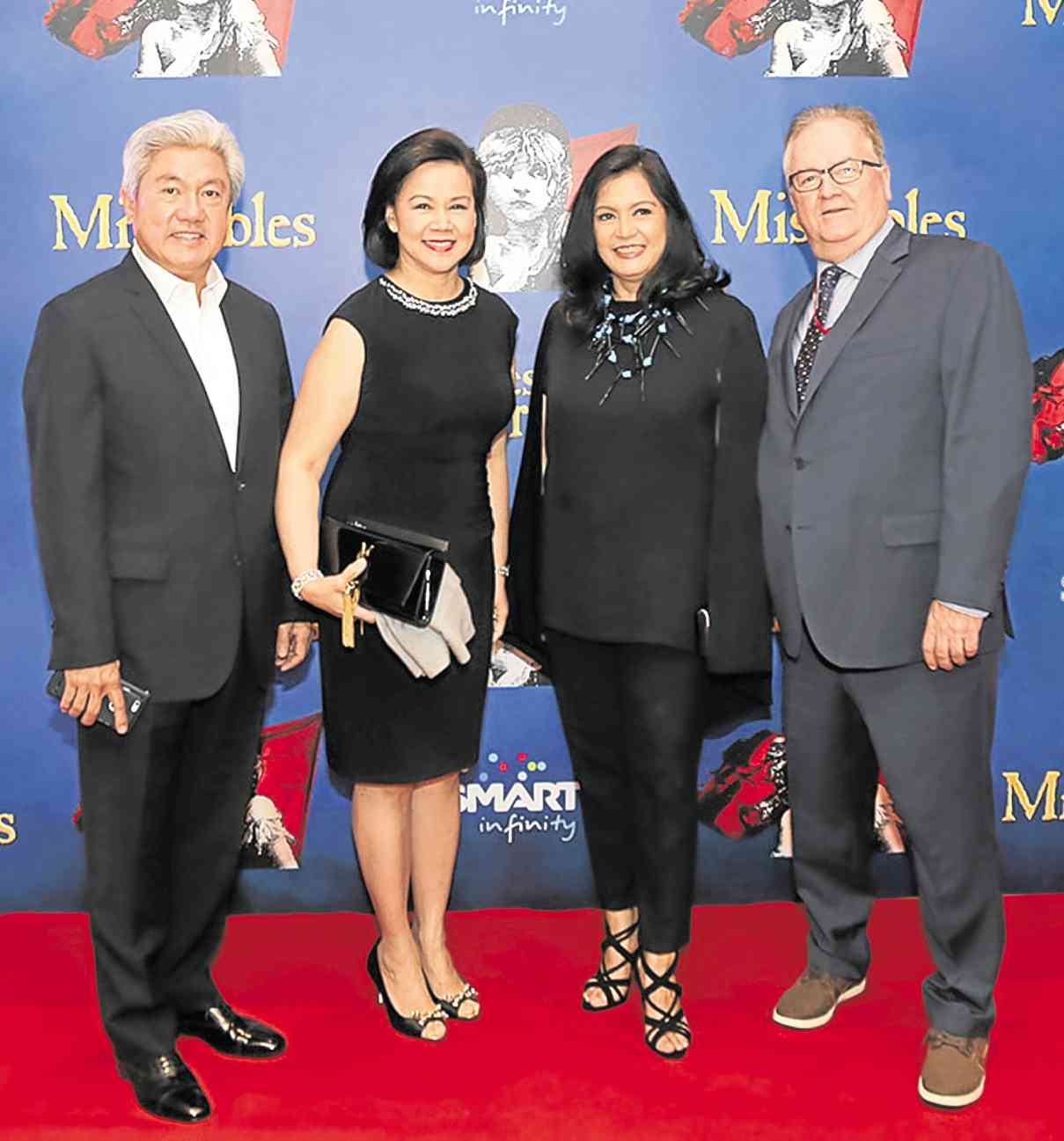 ‘Les Mis’ is the musical thrill of a lifetime–watch it!

Boublil and Schönberg’s “Les Misérables” had its spectacular gala night last March 16 to celebrate the premiere of the iconic musical in Manila and to kick off its Asian tour.

The event was definitely the talk of the town. Legendary “Les Mis” producer and “theater’s first billionaire” Cameron Mackintosh himself jetted in for the affair along with composer Claude-Michel Schönberg, director Laurence Connor and international tour producer Michael Cassel.

The red-white-and-blue-theme gala became a reunion of sorts when Mackintosh bumped into Leo Valdez and Joanna Ampil, who had both been cast in “Miss Saigon”; Ampil also played Eponine and Fantine in the London production of “Les Mis.”

Concertus Manila’s managing director Barbara Rivera-Verzo and husband Joey Verzo graciously welcomed the excited guests, who were ushered into the cocktail area with a red carpet.

Spotted in the crowd were Bloomberry Resorts and Hotels Inc. board director Donato Almeda with wife Marisa; maestro Ryan Cayabyab and wife Emy who was in a stunning yellow gown; Visa country manager for Philippines and Guam Stuart Tomlinson; and Cosmopolitan Philippines’ Myrza Sison with husband Andrej Wisniewski.

Executives from Smart Infinity were in full force: executive VP and head of consumer business for PLDT and Smart Ariel Fermin; head of multisegment marketing Julie Carceller; and marketing manager for activations and retention James Chi.

During the exclusive après party, the Diamond Hotel dripped in red, white and blue as well, with a giant French flag serving as the pièce de résistance for the event.

Star of the season Rachelle Ann Go arrived in a beautiful gown with a thigh-high slit made by her brother, designer Oz Go; she posed for pictures with hunky Chris Durling, who plays Enjolras, the leader of the Paris revolt, in the musical.

Filipino-Australian Chloe de los Santos, who plays Little Cosette, was beaming in her red-and-white number with the other kids of “Les Mis.”

Playing to full houses and standing ovations night after night, “Les Misérables” continues to thrill Filipinos and has been extended till May 1. Watch it while you can, palangga, it’s the musical thrill of a lifetime.

Final tickets are now on sale at ticketworld.com.ph.

Off to Florence and Tuscany

The annual summer migration of the social set has begun, with Philippine Tatler editor Anton San Diego leading the trip of a group of friends to Florence and Tuscany. The gang will be staying in a luxury villa estate close to Siena, complete with vineyards, tennis court and a swimming pool.

Three close friends will also join them, since the three also turned “50-something” in the same generation: Ina Ayala, statuesque beauty Lizette Cojuangco and Jojie Dingcong.

“The 10-day trip is really just a celebration of friendship,” Anton told moi before they jetted off to Italy.

We gorged on sisig nachos, carbonara with truffles, southern fried chicken and steak. Louie was squired by Robbie Comedido. The conversation after dinner at the gelato place next door was on probable scenarios if Davao Mayor Digong Duterte were to win the presidency. Juicy talk as usual!

An earlier story on the opening of Le Maquillage Salon featured the combined photos (left) of Kozuma Mizobuchi and William How. Mr. How was, however, misidentified in the caption. We apologize for the error.