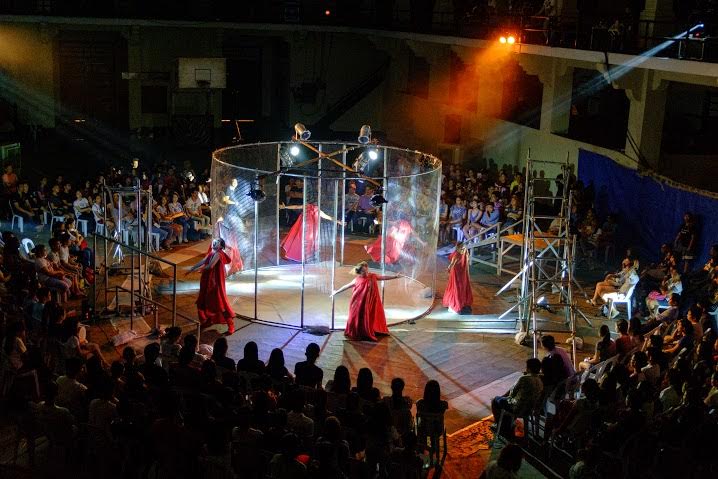 “Coro de los Diablos,” Layeta Bucoy’s adaptation of William Golding’s “Lord of the Flies”— directed by Joey Ting, with an iron-mesh cage for a set in the center of an auditorium. PHOTOS FROM UPLB-PS

UPLB’s ‘Coro de los Diablos’: ‘Lord of the Flies’ made even more unnerving

The fall of civilization and the degeneration of the flower of youth into barbarism and violence were not the only themes tackled by “Coro de los Diablos,” the University of the Philippines Los Baños (UPLB) Philosophical Society’s recent stage adaptation of William Golding’s classic novel “Lord of the Flies.”

Playwright Layeta Bucoy and director Joey Ting also threw into this wicked adolescent cauldron a whole range of issues such as gender conflict, the thin line between reality and illusion, and the unending battle of might versus right.

No wonder the student audience didn’t let up with all its questions in the question-and-answer forum after the show, with the creative team and cast members still fielding feedback an hour after curtain call.

Bucoy recast the material from its stiff British roots into the modern-day Pinoy millennial milieu by transposing the famous airplane crash that leaves the characters marooned, into a post-nuclear war wasteland. The six teenage protagonists stranded on an unknown Visayan island are cut off from the world they had seen annihilated by the blast.

The fear of Golding’s original all-male university students accelerates into all-out paranoia and bleak despair. In the novel, the kids had to wrestle with the possibility that they might not be rescued. In this play, they fear that the world they might return to is no longer the secure, beloved home they still pine for.

Ting set the stage on an iron-mesh cage in the center of an auditorium. Every action was meant to be seen; no backstage door or curtain shielded the actors and their characters from the audience’s gaze.

The cage itself symbolized their physical, emotional and mental prisons. At the outskirts were wooden, brittle slides that acted as a circular bridge leading to nowhere. Without any escape, all six teens had no choice but to confront their inner demons—not a pretty sight especially when those spirits were unleashed without remorse.
In this play, it is democratic, principled civilization that takes a beating, unable to stand on its own against the merciless, primordial human instinct to survive. Bucoy flipped the original material by making the two leading ladies the most powerful forces on the island, and in the play itself.

Pat (Charmaine Lou Aranton) and Donna (Lei Ann Quinquillera) would shed their initial schoolgirl shyness to become vampiric amazons who got their high from stalking and hacking to death a wild boar, the food hunt eventually turning into an ugly, blood-fueled quest for power in their harsh surroundings.

The two would also emasculate the main male protagonist Migs. Vincent Kevin Pajara played Migs with a nobility that was fatal under the circumstances—always rational and clear-thinking, every move planned. Sacrificing himself for his “tribe” every time, the character showed a decency that became wearisome and which would prove to be his undoing.

The other teenagers on the side of “good” stood no chance against the amazons—Girlie (Kyrstynne Angela Vargas) still a child crying for her grandmother; Jules, the smartest in the group who taught them how to make water potable and how to build a shelter but leaned too much on Migs for strength; and Golding’s original stereotype of the “nerdy but whiny genius,” now turned into an effete guy becoming aware of his sexuality and his unrequited love for his best friend. In this part, Mark Mirando offered a character that was winsome and weak, fearful and yet feisty.

The ensemble infused their characters with a humanity that made their apocalyptic struggles all too real, their decisions even sympathetic, if not always with the audience’s approval. In a scenario that mixed “Hunger Games” and “Lost,” everything was possible, including the nuclear attack reawakening a long-submerged monster beast. This go-for-broke adventurousness made the first act a showstopper that left you wanting more.

With Bucoy and Ting pulling out all the stops, sexual, emotional and moral boundaries got crossed and re-crossed, characters shifted from sympathetic to repulsive in a heartbeat, and the audience had to live with this question every time: Without judgment, with only survival at stake, what would you do and what choices would you make if you were the one stranded in a radioactive no man’s land?

The play’s ending was faithful to Golding’s—the remaining characters’ sudden and unexpected rescue now putting them in a position of accountability to the surviving remnants of human society. The haunting, dismayed look on their faces was telling—if cut too soon by the flicker of lights signaling that the play was over.

Ting could have let this last scene linger, if only to let us relish the final punch of this powerful stage experience.